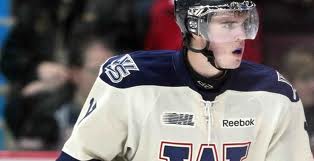 With their 5th round pick, #132, the Avalanche add to their "extra E in his last name" quota with Michael Clarke of OHL Windsor.

His coach with the Spitfires compares him favorably to Adam Henrique. In 68 games last season in the OHL, he scored 15 goals and notched 21 assists. He fell from the 60s to the 110s on Central Scouting's list as the year ended, largely because he was boosted by a hot start and then slumped late in the year. He's 6'0, 184, according to the Spits' website, which means he's probably put some size/muscle on since then. He's also very young, just turning 18 a month and a half ago. This sounds like a compete guy, a hard worker, with ok size.

Yahoo!'s Buzzing the Net blog talked to him early in the 11-12 season, after he got off to a hot start. Here's his Five Questions:

1. In your mind, what would scouts say is the biggest area of your game you'll need to improve by the time you're on the cusp of turning pro?

2.Whom in the NHL do you look at and say, "That's someone I need to be playing like?" or, "I see things he does that I can add to my game?"

"I definitely look at [New Jersey Devils centre] Zach Parise as a player I compare myself to. He does everything; he's a leader, he's a good skater, he can shoot the puck, he's good defensively, he sets up teammates. He's a guy I would like to mould myself after. He's kind out of the spotlight in New Jersey, but I really notice him."

3. Outside of family, who has had the most impact on you in hockey'

" 'Outside of family?' So I can't say my cousin?." (BTN: Of course you can.) "Well, my cousin, Matt Clarke, he never got drafted in the OHL but he made the London Knights as a walk-on when he was 17. He's just an example of hard work. He had nothing given to him, he just worked for it all. He was assistant captain and played two years of pro [with Utah in the ECHL and briefly with the AHL's Lake Erie Monsters] and he is just a really inspirational example of how hard work can pay off for you. He's at [the University of] Western [Ontario] right now finishing his degree in engineering."

4. Hockey players have to keep very strict diets. What is something you cannot eat or drink too often but you sneak some anyway?

"Definitely my guilty pleasure would be chocolate. You can't have it on game days or too often but after a long weekend, it's always good to have that. You really have to limit the sweets. I'd say my favourite would be a Caramilk bar."

5. If there was no hockey, what sport do you think you would play?

"I was a pretty good soccer player growing up before hockey took over. If I had a choice, it'd be baseball. It looks like a lot of fun, great game, great time. I never played it, but it's something I'd like to try one day."