Share All sharing options for: Checking Out Mitchell Heard 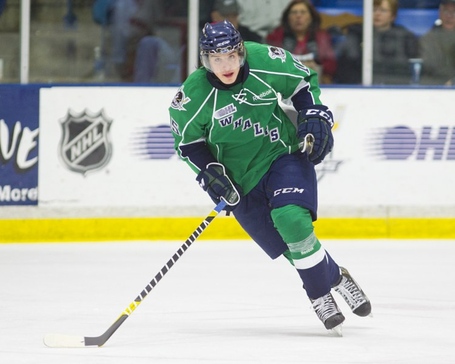 If you're like me, when you saw the name "Mitchell Heard" pop up next to the Avs logo last Saturday, your first response was "who"? Even though I hadn't been paying much attention to who the prospects were this year, that name was one I had never seen mentioned anywhere. There was a reason for that - he was an overage player, someone that had been eligible for the draft for not one, but TWO years. In that time, teams hadn't even gambled a 7th round pick on him. He was unranked this year as well, and yet, here he was, the Avs top pick from 2012.

It was a bold move for sure, one that none of us saw coming. He seemed like a bizarre pick, even for someone that likes to go off-the-boards as much as Rick Pracey. The 6'-1", 190lb native of Bowmanville, Ontario is known more for dropping the gloves than anything else, but in the recap on the Denver Post site, Pracey called him a "skilled player, highly competitive". Even though I wasn't really seeing it right away, Pracey has a tendency to be right when it comes to matters like this.

I was intrigued, so I started digging. What was it about this kid that made him worth the #41 overall pick when names like Frk and Sissions - players expected to go in the first round - were still on the list?

As it turns out, there's a bit more to Mitchell Heard than meets the eye.

Up until a couple days ago when @Heardy15 became a "Colorado Avalanche 2012 Draft Pick", his discription on twitter contained part of a quote of advice from a then-fellow undrafted player, Martin St. Louis (the part quoted shown in bold):

"Don't lose your confidence. For me, I felt I played along side of first round, second round, third round picks... whatever. Those guys were supposed to be better than me, but I didn't feel they were. Don't let your confidence go down because somebody was drafted and you weren't. Teams make mistakes. Some guys flourish early and they aren't in the league anymore. Some guys flourish later. I always had the attitude of, 'Screw you. I'm going to keep on banging on your door until you let me in.'" (link)

Life as an undrafted player trying to make it into the NHL is a complex one. Master blogger Justin Bourne, an undrafted player himself, wrote an article on it about a year ago. While drafted players are taken care of by the organization, undrafted player's agents are busy all summer just trying to find a team that will invite their client to a camp. Even if the agent is successful, it doesn't get any easier from there. Drafted players get the best linemates and power play time, plus their leeway with coaches and chance of a call-up is much higher. If an undrafted player even wants a chance at the NHL, he has to have the tenacity to go out and earn it.

However, the concept of being an undrafted free agent was far from a new one for Heard. As it turns out, his name wasn't called in the OHL Entry Draft either. After scoring 30 points in 22 games with his hometown Bowmanville Eagles of the OJHL, he signed as a free agent with the Plymouth Whalers in 2009. The 18-year-old scored 3 points in 16 games before heading into his first draft year. He was passed up, then scored 48 points in 66 games his sophomore campaign. When June 24-25, 2011 rolled around, his name was not called once more.

However, right after the draft, Heard did get a call: he was invited to rookie camp by the Maple Leafs. After a so-so season, it was actually his tenacity and grit that most caught their eye. He had an impressive enough showing - 4 goals in the 3 scrimmages - that Leafs' management then asked him to help represent Toronto in the the 3-game scrimmage held yearly against the prospects from Pittsburgh, Ottawa, and Chicago. Heard accepted, and during those three games, he scored 1G/3A/4P against mostly drafted players. This further caught the eye of the organization, so they invited him to their main camp.

This is Toronto we're talking about, so naturally the media started to cover the story at this point. When asked about his situation by The Toronto Star, Heard replied,

"I wasn't drafted in the O (OHL) and I'm there now. If you get drafted, it's great. You've got to look past it. You keep working hard, you keep plugging away and good things happen."

And good things were happening. Dallas Eakins, coach of the Toronto Marlies that served as the Toronto prospect coach during the tournament, had this to say about Heard:

Mitchell has a low panic level and he really thinks the game well. He's a well rounded player; somebody who can play on the power play, the penalty kill and a regular shift.

Also, the Leafs' director of player personell and the man in charge of the camp, said that Heard was "a guy who continues to make himself a conversation piece."

However, undrafted players are undrafted players. In the 70-person Maple Leaf camp last year, Heard didn't impress enough to earn a contract. If he had been a draft pick of the Leafs, he would have known he was coming back to Toronto next year, but instead, he headed back to the Whalers for another season with his NHL dream still an uncertainty. Yet he had left an impression, as more than one fan was surprised he didn't earn an ELC. He was a long-shot to be sure, but not as long as most of the others they had seen.

The shifty center headed back to the OHL instead, where he managed to score at a point-per-game pace across 57 games. He also racked up 111 minutes, mostly from the 12 fights he had that year. But there was more to him than just dropping the gloves. He decribes himself as a 2-way center, saying "I protect the net first and then the offence will come." The offense does in fact come, so here are some goals he's scored over the past few years: (Goal 1) (Goal 2) (Goal 3 and Goal 4) (Goal 5) (Goal 6, Goal 7, and Goal 8 (SO)). His hands are surprisingly slick. In a post-game interview where he was named the first star, the announcer made the comment that a typical "Heard goal" was top shelf, and from the clips I've seen, that does seem to be the case. He can certainly elevate the puck - no one's peanut butter is safe. He was also voted Best on Faceoffs in the Western Conference Coach's Poll and known as a player that's effective in all areas of the ice.

On top of that, he was actually named an OHL All-Star last year. The list reads like the first round of the 2011 and 2012 drafts - Dougie Hamilton, Ryan Murphy, Jamie Oleksiak, Ryan Strome, Ryan Spooner, Tanner Pearson - but there, in the mix, is Mitchell Heard (and Michael Sgarbossa for that matter, who was at that time still an undrafted but signed member of the Sharks). Also, according to this article, Heard also had meetings with several NHL teams over the course of last season [2011-12]." Clearly, Sherman knew that the Avs weren't the only ones interested.

Off the ice, Heard is known to give back to the community. His mother works in daycare, so he's comfortable around kids and has said that he really enjoys working with them, especially teaching them hockey.

Like Hayes did last year, Heard gave up his summer to come back early and work hockey camps. It was just another way for him to be involved with the Whalers.

"I decided to come down a few weeks early and work with the kids during the camps," Heard said. "I had a blast. I just love seeing the smiles on the kids' faces when I'm showing them drills and teaching them how to play the game. It puts a smile on my face, too."

So why was Heard taken at #41? Not only does he have some clear offensive skills, he plays a strong defensive game with an edge. He's not afraid to drop the gloves, but he can also help his team out in other ways, such as power plays, penalty kills, faceoffs, and scoring clutch goals. He's an extremely hard worker, and his tenacity for sticking with hockey and "banging on doors until someone lets me in" is certainly commendable. Furthermore, he gives back to the community. Basically, he's a personifcation of the Avs drafting criteria of Skill, Character and Compete.

Before the Maple Leaf rookie tournament, Heard said "I’ve been overlooked my whole life." That certainly used to be the case, but not anymore. Welcome to the Avalanche family, Mitchell Heard. You've been approved by Pracey, and that's good enough for us.