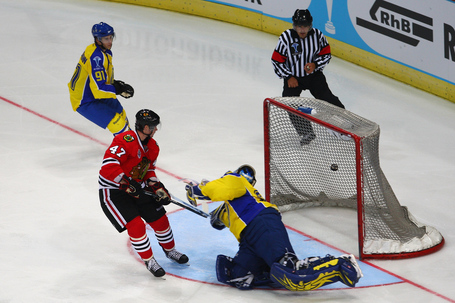 When I first started doing these grades over at ITCS (if you haven't heard of it, don't worry), I made a decision to do an entry for every player who played with the Avalanche during the previous year, even if it was a ridiculous short time. My thought was that I need to recognize every player who contributed in any way, even if that contribution was relatively minor. I still think that's the right decision...even if I'm the one who got stuck having to write this.

Brophey played just 3 games with the Avs during a brief callup in December. He had just 23 total shifts and didn't register a shot on net. He had just 12:32 of ice time, which means it is literally taking me longer to write this than he played for the Avs this year. He did win 3 of the 5 faceoffs he took and had 3 more hits (4) than Joakim Lindstrom (1) had in 13 less games. Of course, Brophey wasn't brought in as a free agent last summer to get ice time with the Avs. He was signed to be a Monster (as in Lake Erie) and ended up leading the Monsters in scoring with 39 points. Maybe not bromance material, but he certainly did his job.

2012 Outlook: Brophey, with 5 full AHL seasons under his belt, is a free agent this summer. He could be back with the Monsters, another AHL club or perhaps overseas.