On Saturday, July 28, 2012, friends of Jessica Ghawi gathered at the Edge Ice Arena in Littleton, CO, to celebrate the life of a vivacious and beautiful woman. The night included on ice action as players donned gear for pick up games and a stick and puck session. Other people gathered in the Penalty Box bar and raised a glass of brew in Jessi's memory. Everyone stopped by the silent auction which boasted a table full of items generously donated by people from all over the community. Regardless what a person was doing, it was something Jessica herself enjoyed: hockey, good beer and philanthropy.

Items for the silent auction included sports memorabilia donated by Kroenke Sports Enterprises, the Denver Cutthroats, MVP Sports Cards and Memorabilia and others, as well as items like Melting Pot gift certificates, jewelry and game tickets.

At 7:30 pm, everyone joined together for a moment of silence for not only Jessica, but all the victims of the Aurora shooting. Some also spoke of their experiences with Jessi and the ways she touched their lives. It was a bittersweet moment, one that I will never forget, and did much to help with the healing process.

We often talk about how amazing the hockey community is, and Saturday proved it to be true once again. The silent auction and donations given at the door added up to over $3,000. The money was split between the Jessica Redfield Sports Journalism Scholarship Fund and the Lowak Recovery Fund. Brent Lowak was with Jessica at the theater and is currently recovering from gun shot wounds he sustained.

This night never would have been possible without Scott Pantall. He was the force behind it, reaching out to people as early as last Saturday. He enlisted the help of some amazing people who made certain it was a resounding success: Mary Lloyd, Rachel Polner, Jamie Mount and Roger Chen. I feel privileged to have had the opportunity to work with them on this. 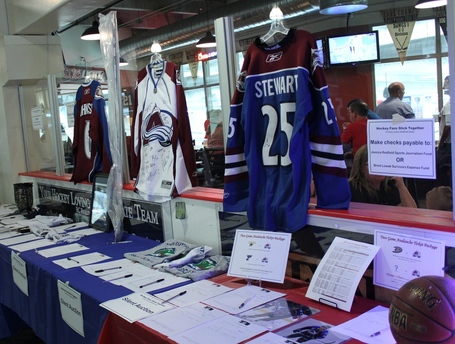