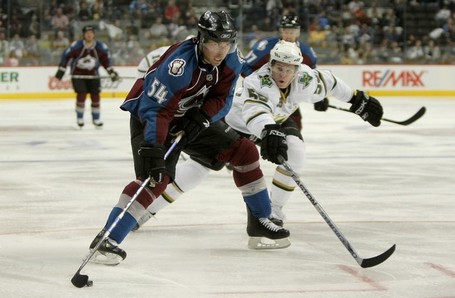 The Colorado Avalanche have been working through the natural progression of an NHL franchise. After the glory years of the late '90s and early '00s it has been a difficult process watching the decline and rebirth of the Avs. Colorado's decline was hastened by the lockout and the institution of the salary cap, but it was inevitable. Even the hated Red Wings, long cited as the model of consistent excellence in the NHL (propped up by fortuitous 3rd, 5th, and 6th round picks), are showing their age and appear to be on the decline. The Los Angeles Kings, once an afterthought in the Western Conference have completed their rebuild and now stand atop the league. Well-managed teams seem to get through the decline and rebuild fairly quickly, spending much of their time qualifying for the playoffs and even contending for the cup. Others never seem to quite get there.

There are a few identifiable states that a franchise must pass on their way to greatness and from there to irrelevance. These are:

Having few assets of interest to other teams, the franchise on Death's Door has a choice. Continue expensive lingering in hopes of reaching the post-season, or blow it up and start over.

Through combinations of bad luck and management incompetence, some franchises get stuck in various stages. For instance, CBJ and ATL/WIN have managed to flop back and forth between All Blowed Up and Rebuilding, almost since their inception. Calgary has been camped on Death's Door for several seasons, and they appear to be content to remain there for at least another. Other teams manage to skip all the good stages and jump from Rebuilding to Death's door (MTL, TOR).

With some luck the Avs are a season away from Contending in the Western Conference, and are being built to remain competitive for many years before their inevitable decline and rebirth. In this way, all franchises are Phoenix (with the possible exception of Phoenix which may be going down in flames).