Because two or three people demanded it!!

Share All sharing options for: Anatomy of a Goal: LA vs. COL - Goal 2 (ES)

In an effort to push Derek's Barrie-negative recap further down the page, here's a breakdown of El Capitan's first goal of the season. This goal sparked the "comeback" in the early parts of the third period in last night's tilt against the defending Stanley Cup Champions and is a great example of people being where they are supposed to be for high-percentage scoring opportunities in the modern NHL. It also allows me to make fun of Justin Williams.

The play starts just under a minute expired in the 3rd period when Gabriel Landeskog out-duels LA stud Anze Kopitar (#11) for a loose puck and slaps it just wide and into the corner. Notice the "manpower" advantage that LA has in this screen cap. Both points have largely been abandoned by LA defenders (save for Dustin Brown, #23, holding the far boards position who won't be involved in the play AT ALL) and it's a 4-on-2 game down low.

Just as the puck flies between Matt Duchene and Kings netminder Jonathan Quick, new Av P.A. Parenteau moves into the top of the slot. Justin Williams (#14) drops anchor for the remainder of the play. 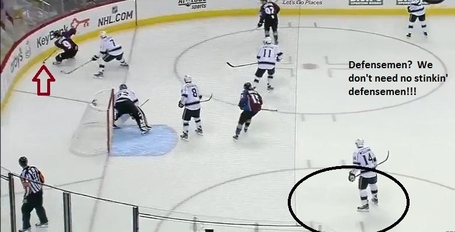 Dutchy wheels into the corner with speed and prepares to defend the puck from the on-coming Rob Scuderi (#7). Parenteau has set up shop above the crease with Drew Doughty (#8) marking him. Kopitar is somewhat following Landeskog as he slides into a cycle position on the boards.

Duchene shake-n-bakes a high-check/trip from fan-favorite Scuderi in the corner showing everybody watching how easy he is to knock off the puck, just like his entire career to this point. Landeskog smells a give-and-go opportunity and wheels toward the net. Williams abides. 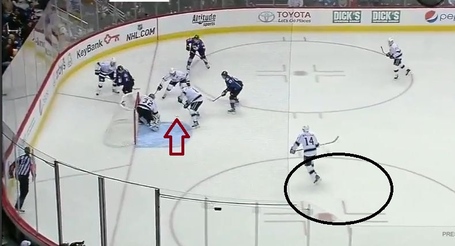 Duchene drives the side of the net where a collapsing Kopitar is waiting while Quick drops into a vertical/horizontal paddle-down post position to prevent the net drive dunk. Dutchy slings a backhand pass right in front of the crease, but neither Doughty nor a well-positioned Pappy can pick it off and it slides high in the right side of the slot where... 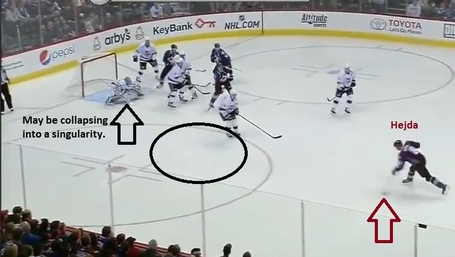 ...Jan Hejda is waiting to take the puck to the woodshed. That, ladies and gentlemen, is called "getting one in your wheelhouse." Maybe the defensemen CAN contribute to the offense!! 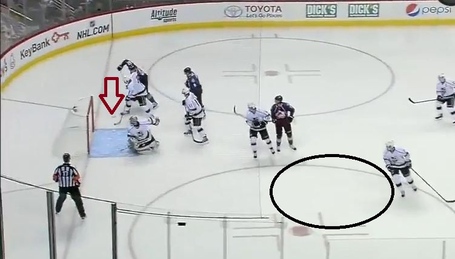 The Hejda shot SuperBalls off of the back boards to the left side of the crease. Scuderi thinks he has contained young Gabe, but he would prove incorrect. Duchene has followed his pass up above the crease and is in prime rebound position if the Jan-tastic slapper hits off of the goalie. Quick either has the best peripheral vision in the league or has lost sight of the puck. There is no middle ground. 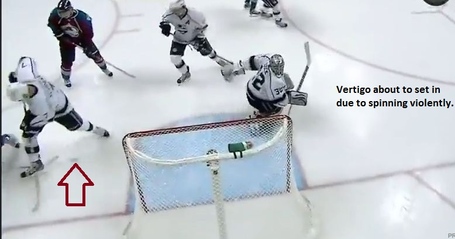 Landeskog deftly displays his supple mitts as he slips a re-direct toward the yawning net, right through Scuderi's wickets... 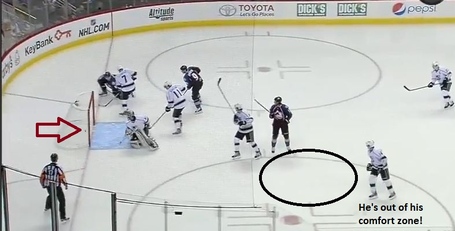 ...and into the net. Williams is still looking for the Hejda shot, Kopitar and Duchene have spectacular views from their spot, and Scuderi feels violated. Brown is also back in the frame. 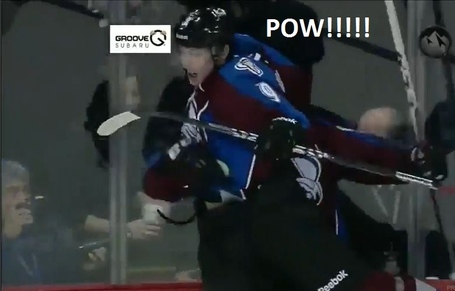 The Duchene line shows off the new goal celebration that I'm sure was all the rage in Europe during the lockout: Flying Elbow to Captain's Face. FUCK YEAH!!