A Look at the Stuart vs. Landeskog Hit

A breakdown of the questionable contact that occurred during the 1st period of the Avs vs. Sharks game.

Share All sharing options for: A Look at the Stuart vs. Landeskog Hit

As it turns out, a hit that makes contact with the head isn't inherently illegal. At the beginning of last season, the Department of Player Safety released this video explaining legal hits to the head. Basically, a hit is legal if it's a full-body check that just happens to make contact to the noggin; however, in none of these hits is the head the only point of contact. There is always contact to the chest and hips region of the player as well.

With that in mind, onto the Brad Stuart vs. Gabriel Landeskog hit:

Mute this and skip to the second replay angle at :47. About a second later, the hit happens. This is the cleanest screenshot of primary contact that I could generate: 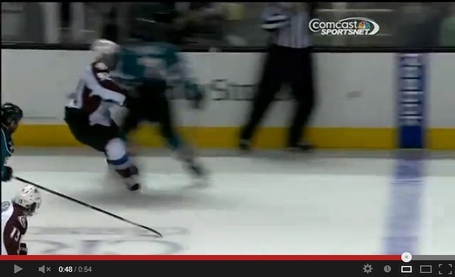 That certainly doesn't look like a shoulder-to-chest hit to me. The only part of Landeskog that is in contact with Stuart right now is his head. To make it worse, as Rycroft pointed out during an intermission, Stuart had his knees bent as he came into the hit the straightened them as he made contact. Here's the hit about half a second later: 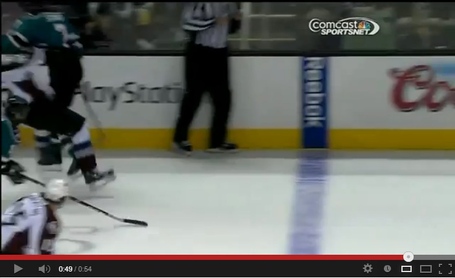 While both player's feet are off the ice, Stuart's skates are much higher than Landeskog's (and they actually get even higher before he finally lands). While I understand that sometimes players' feet will come off the ice during a clean hit, based on my understanding of physics, I don't think that's the case here. He simply ends up with too much hang time at too vertical of an angle for this to just be a result of the impact. After watching the replay a few times in slow-motion, I agree with Rycroft - Stuart leapt into the contact.

The fact that there is still space between their bodies also says to me that this was not a full-body check - the only part of Landeskog that was impacted was his head. Stuart followed through with his elbow as well, extending it out and up instead of keeping it mostly tucked like he should have.

Even though I've seen the replays, I'm not an expert. Shanahan will make the final call, but I have a hunch that this is not a legal hit. In either case, there is still a silver lining - at least Landeskog was able to return to the game. It's just unfortunate that if this was indeed a missed call on the official's part, it could have cost the Avs two very important points today.