From the Monsters Desk: Bulldogs, a Hishon sighting and Meursy

Share All sharing options for: From the Monsters Desk: Bulldogs, a Hishon sighting and Meursy

A short, but sweet weekend for our beloved Monsters [2-3-0]. One and only one game against North Division rival Hamilton [1-0-1] Friday night at 7:30.

Last weekend showcased both the dizzying highs and the terrifying lows Lake Erie has been capable of so far this year. Friday night the team was terrible, no energy, no compete, and nothing on the scoreboard until garbage time. Shortly after the game, Captain Lerg called a players-only meeting and whatever was said had positive effects from the opening faceoff on Saturday. Unbenching Duncan Siemens and adding Matt Hunwick fresh from Colorado also helped a bunch I imagine. Sixty minutes and 5 goals later, the Monsters had finished their most complete game of the season to date. The challenge now is to continue that. Doug Plagens caught up with Andrew Agozzino, Sami Aittokallio and Bryan Lerg after practice Monday to get their thoughts on Saturday's game.

Hamilton opened their season last weekend with a win over the St. Johns Ice Caps 3-2, including 2 shorties from Greg Pateryn and Patrick Holland. Pateryn also scored in the following night's 4-3 shootout loss to the Grand Rapids Griffins.

In other news, Michael Schumacher and Vincent Arseneau were reassigned to the Denver Cutthroats. Coach C said over the weekend that David Van der Gulik was close to being ready so shipping these two fellas out indicates that he might be available on Friday. That leaves Dan Maggio and Gabe Desjardins still (possibly) out with Upper Body Injuries and Joey Hishon presumably healthy but still undergoing conditioning after missing pre-season with a groin/hip flexor issue.

A fun infographic from the LEM site about where the players are from and how far away Finland is from the US. 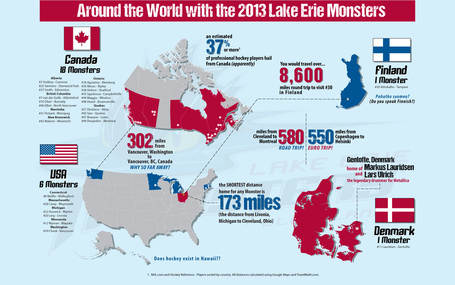 As seen above, the Lake Erie Monster himself was spotted in downtown Cleveland this week.

The team also met with fans Wednesday and apparently a good time was had by all. Hishon sighting! No orange jersey either! 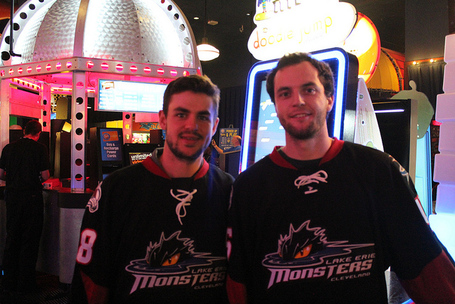 Friday: Monsters vs. Hamilton Bulldogs at the Q. 7:30 pm, radio on WHKW

Preview from the LEM site, including an interview with Brad Malone

This week's Pre-game tune is "Melt" by Monster Magnet, which is probably what Coach Chynoweth wanted to do to the ice in the middle of last Friday's game. Enjoy!

As always, I'll be here and on twitter for the game, it's $1 dog night, so feel free to stop by. Recap and links on Saturday morning.

Last but definitely not least is this from Garrett Meurs. He's pure gold on twitter, I'm thinking of adding a Meursy tweet of the week feature to the Monsters Desk.