From the Monsters Desk: Oklahoma! Personnel changes and some High Fashion

Share All sharing options for: From the Monsters Desk: Oklahoma! Personnel changes and some High Fashion

This week our beloved Monsters [8-6-1] will see the Oklahoma City Barons [7-8-2] at the Q arena for 2 games on Thursday & Friday. Unfortunately for us, we miss out on facing Ilya Bryzgalov, depending on how you look at it.

Last weekend, Lake Erie played the Marlies once and Hamilton twice and ended up with two wins and a tough shootout loss for 5 points. All three nights saw the team relying on the defense in close games, which isn't exactly what we expected at the beginning of the year and is a welcome surprise given the relative inexperience on the blueline. Besides the usual suspects on offense, Garrett Meurs scored his first pro goal, Beaupre had 2 goals and Mitch Heard and J.T. Wyman had breakout weekends. Given that the roster will be pretty fluid throughout the season, it's very encouraging to see a system that is working in all three zones right now rather than relying on a few key players to win games.

This week we have a special guest preview of the Barons from MHH's and the OKC area's own SteveHouse:

"Goalieman Jason LaBarbara was just sent down to make room for Ilya "thecoolBryz" Bryzgalov in Edmonton. This is a team that has struggled pretty mightily. And with good reason, I mean this is the baby Oil after all, and the departure of goalieman Yann Danis to the Adirondack Phantoms left them with a large hole in net. So that should help.

Goals FOR have been kind of hard to come by this year, as Mark Arcobello has been tearing up the NHL (12 points in 20 games) instead of shredding AHL defenses. We miss him. Responsible for picking up the scoring slack have been Linus Omark (yes the shootout guy, he has 10 goals, and only one other Baron has 5) and recent acquisition in the Smid deal Roman Horak.

Honestly when the season began I wasn't sure where the offense would come from, so Omark coming back was very, very welcome. But it's not even all about the individuals. It's an Edmonton organization wide aversion to entering the offensive zone with possession. Not an odd man rush? DUMP THAT SHIT. It's absolutely maddening. Elliott and Hunwick will have plenty of chances to win a puck race back and spring a forward through the neutral zone."

SH also sent a link to tendthefarm.com, an excellent site dedicated to the OKC Barons. LEM could really use something like this, and yes, I am too lazy to create something similar so I ought not to complain.

Leading off this week's top stories is a whole bunch of transactions:

Tyson Barrie was recalled by the Avalanche

Daniel Maggio was recalled from the Cutthroats

Matt Hunwick was reassigned to the Monsters from the Avs

Losing Barrie will hurt obviously, Lake Erie racked up 9 points in the 6 games he played and we might not see him again in Cleveland. With that plus Siemens' injury and the addition of Hunwick & Maggio, we'll be seeing a whole new defensive setup on Thursday night. Malone was 5th on the team in scoring and played a key role on the PK, so that smarts too.

Learn more about a couple of Monsters in these 10 questions interviews with bobsledding fan Paul Carey and Mark Olver, who grew up rooting for the Devils for some reason.

Interview with Garrett Meurs from Dennis Manoloff of the Cleveland Plain Dealer. More Meursy gold in this one.

Spotted at the Flashes of Hope Fashion Show the other night: 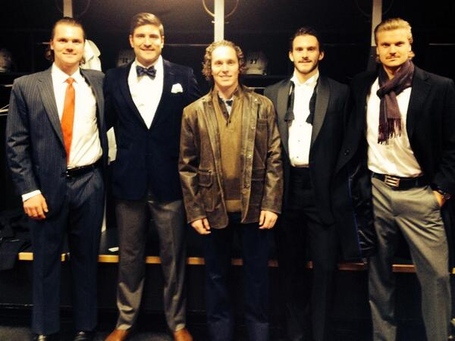 As usual I'll be updating the games this weekend, both here and on twitter. We'll be killing time before the Coyotes/Avs game tonight so stop on by.

Special thanks to guest contributor SteveHouse for the Barons preview. Other than team PR, the AHL has very few articles written about it and an honest analysis is always welcome.

No Meursy twitter tidbits last week so we have a double dose of our intrepid rookie here:

This one slipped by us, but Trevor Cheek was on the spot

All kidding aside, congratulations on your first goal Garrett!