From the Monsters Desk: Utica, Rochester and the return of Tyson Barrie

Share All sharing options for: From the Monsters Desk: Utica, Rochester and the return of Tyson Barrie

We have a 3-game weekend for our beloved Monsters [4-5-0] this week. A Thursday/Friday set with struggling Utica [0-7-2] followed by 2 days off, then an afternoon contest on Monday at Rochester [4-2-2]. This is a great opportunity for the Monsters to get back into the swing of things starting with a brand new team that hasn't won a game yet.

Last weekend, the boys in burgundy suffered a loss to Grand Rapids 6-4, featuring too many penalties, somewhat less than outstanding defense and a comeback that fell just short at the end. Colin Smith had a 2-point game playing with the skill guys for the first time and he seems to get better every game. Really like the way he's developing.

Joey Hishon took a frightening tumble into the boards in the 1st period against Grand Rapids and lay motionless for a few moments before gingerly skating off the ice. No word from the team as per usual, but reports are out there saying he feels better and may have been practicing already. Let's hope so.

Tyson Barrie was sent down from the Avalanche and Matt Hunwick called up on Monday. Great move for Tyson, he wasn't getting any PT and will be a better fit for Lake Erie than Hunwick. Barrie played 38 games for the Monsters last year, racking up 7 goals and 22 assists.

This isn't exactly the move that I think LE needs for the defense, but it is an improvement. Elliott and Barrie won't play together 5v5 so we will see some new pairings. Something like...

...with Beaupre & Maggio still injured and Moffie in the press box.

Calvin Pickard is in competition for the AHL's Masked Madness. You can vote for his mask by "liking" it on the AHL facebook page if you're into that. 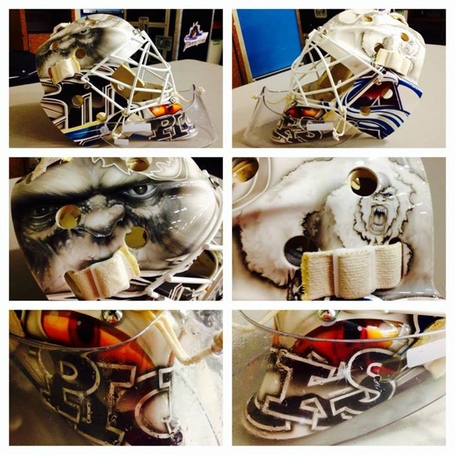 Dennis Manoloff of the Cleveland Plain Dealer had an interesting Q&A with Mitchell Heard. "I got a skate in the face that required more than 20 stitches...." Not as fun as it sounds.

Rumors are that Sami Aittokallio won't be ready for this weekend's games, so figure on definitely seeing Picks on Thursday & Monday with Kieran Millan possibly playing on Friday.

This week in pre-game tunes I'm gonna burn out your eyeballs and leave a note in Braille. Brainstorm by Gang Starr.

As always, I'll be live-tweeting the games and posting updates here. C'mon by and set a spell.

<blockquote class="twitter-tweet"><p>Just in case anyone was wondering elephants are the only mammals that cannot jump</p>&mdash; Garrett Meurs (@garrettmeurs) <a href="https://twitter.com/garrettmeurs/statuses/397936528413835265">November 6, 2013</a></blockquote>
<script async src="//platform.twitter.com/widgets.js" charset="utf-8"></script>