From the Monsters Desk: Two against Rochester. Again.

Share All sharing options for: From the Monsters Desk: Two against Rochester. Again.

The beloved Monsters [12-11-3] take on the Amerks [13-11-4] again this weekend in a home-and-home set. These two teams have faced off 4 times so far this season with Lake Erie earning a 1-2-1 record. Last week the LEM lost indoors to the Amerks, lost in a shootout outdoors to the Amerks and closed out the weekend with a shootout loss to the Utica Comets. The time has come to beat these guys.

As reported a million other places before SBN would let me publish this article, CBC did an interview with Joey Hishon this week about his struggles coming back from concussion. Also included were the facts that he has been out with a Hip Flexor injury, as he was earlier in the year, and that he should be in the lineup tonight against the Amerks. 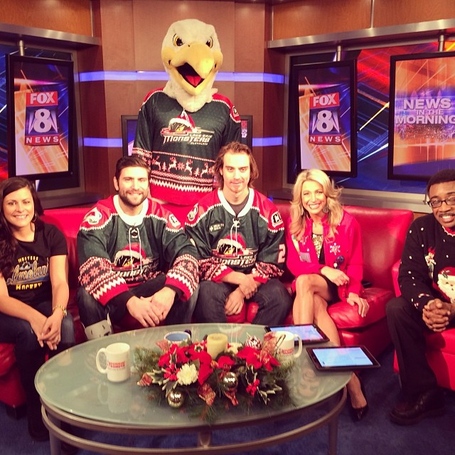 Looks like Duncan is. Siemens and Desbiens stopped by Fox8 in Cleveland to show off their Ugly Christmas Jerseys and to take on the Fruitcake Challenge.

Watch the interview, various awkward moments like asking Desbiens about his accent and Duncan trying hard to act like he's thrilled to be sitting next to a perky morning TV hostess. Some good does come out of it tho', no knee brace for Siemans and Desbiens talks about having a broken ankle, but he thinks he'll be back after Christmas sometime.

The LEM crew put together a fun timeline of the trip to Rochester for the Frozen Frontier full of tweets and vines and instagrams.

For those of you still desiring an Ugly Christmas Jersey, the Monsters are doing an online auction of Sami Aittokallio and Brett Clark's sweaters that goes until Saturday night. (s/t to c6 and Cole for pressuring them into it)

This week's AHL power rankings from The Hockey Writers are out, our boys in Burgundy fall into 17th.

The gang from lakeeriemonsters.com have another interesting Getting to Know... article this week featuring Spongebob fan Trevor Cheek and the big swede Michael Schumacher, who oddly enough idolized Peter Forsberg rather than Mika Hakkinen while growing up.

Speaking of Trevor Cheek, Dennis Manoloff from the Cleveland Plain Dealer had a Q&A session with him for the paper's Off the Ice feature this week.

Saturday vs Rochester 7:00pm, radio on WHKW, TV on WUAB

Preview from the LEM crew

Friday - "Pay the Man" from the Offspring

Saturday - "Sinking" by the Cure

I'll be here tonight and tomorrow night updating and tweeting. Stop by if the site still works!

And Happy Holidays from Your Lake Erie Monsters! 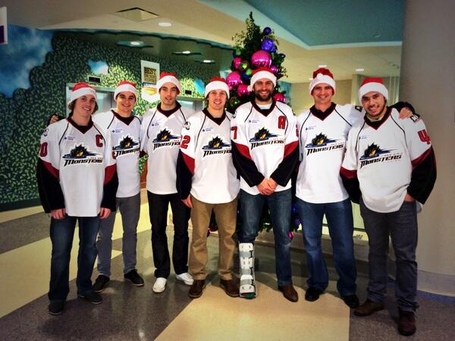