From the Monsters Desk: Thrown to the Wolves

Share All sharing options for: From the Monsters Desk: Thrown to the Wolves

After playing the Amerks 4 out of the last 5 games, it's time to say good bye for a few weeks and play a different team. The beloved Monsters [14-11-3] host St. Louis affiliate Chicago [15-12-2] for a pair of home games this weekend. The Wolves sit 7th in the Western Conference, but just a point ahead of Lake Erie in 9th so a sweep would be an excellent idea. This will be the first look at Chicago this year and in some wild coincidence, the beloved Avalanche are playing the other Chicago hockey club tonight.

Last weekend Lake Erie finished off their December mini-series versus Rochester with 2 wins, the first coming in a twin shutout that Mark Olver sealed in the skills comp, and the second one ended with a fantastic overtime goal by Stefan Elliott. The downside was the Amerks earning two loser points to keep them slightly ahead of the boys in burgundy in the North Division.

On the injury front, Joey Hishon returned to the lineup last weekend, but was uncharacteristically held scoreless. Gil Desbiens told the morning crew from Fox8 in Cleveland that he and his broken ankle expect to be back skating with the team soon after the Christmas break. Mike Sgarbossa and Duncan Siemens have told fans they will be back on the ice soon, Boss perhaps early in January, Duncan a bit later in the month. No new info on David Van der Gulik or Gabe Desjardins, who are out with LBIs.

Mikael Tam took a charging major/misconduct Friday for his utter destruction of Amerks forward Mike Zigomanis. Yesterday, the AHL announced he would be serving a 1-game suspension for the hit. Tam needs to play hard to be effective so this wasn't a huge surprise, but playing hard while staying out of the box will be the key to him staying in the lineup.

Joe Sakic was in Cleveland a few weeks ago to check on the farm and sat down with Doug Plagens for this interview, talking about the prospects and the relationship between Lake Erie & Colorado.

Like the song "Winter Wonderland"? Sure, we all do! Well you're gonna love this: Monsters players singing in the Christmas cheer. Originally played on the Q Arena jumbotron last Saturday night, now available on YouTube for one and all.

Congratulations to cathyannhenry on winning the silent auction for Garrett Meurs' Ugly Christmas Jersey on Saturday. We're all jealous!

AHL standings - Monsters are 3rd in the North, 9th in the WC

Preview from the LEM crew

In honor of 80's night at the Q, PGT is going to hook you up with some excellent New Wave goodness.

For Friday, Al Jourgensen and Ministry as you've never bothered to remember them, "Effigy (I'm Not an)".

And for Saturday we'll go with A Flock of Seagulls performing "(It's Not Me) Talking". 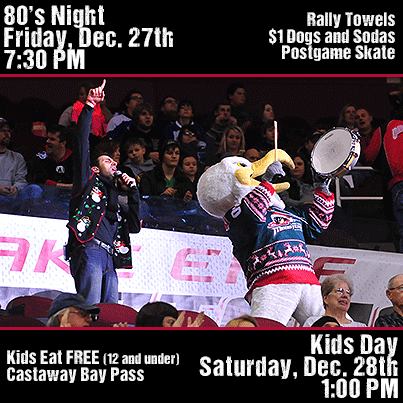 Stop by tonight before the Avs/Hawks or tomorrow afternoon for game updates and whatnot plus recaps on the morning after.

Day game at Utica on Wednesday, then a weekend series at home against Milwaukee