The Edmonton Oilers slide into Denver to end 9-game road trip against the ameliorating Colorado Avalanche in a Northwest division clash of talented 'youngstars'.

Share All sharing options for: Oilers at Avalanche, Game 25 Preview

Curling. That is why the Oilers have been forced from their homes and sent on a 9-game road trip; so grown men can slide a weird circle of stone towards other weird circles of stone.

Well, whatever the reason for their visit, tonight's contest marks the 4th match-up between the youthful division rivals, with the home team winning each of the previous 3 games. Edmonton has outscored the Avs 11-8 through those 3 bouts, but come into the game sporting a weak 2-4-2 record over their lengthy road swing. The Oil are coming off a big win over the washed up and has-been Chicago Blackhawks 6-5 on Sunday, so their confidence should be returning. They also got Shawn Horcoff back from injury to increase the average age of their squad to 16 years, 8 months, but goalie Devan Dubnyk is questionable after colliding with a teammate. That means the Avs could see back-up netminder Yann Danis, which suggests a 65-save shutout is on the horizon.

The Avs have played 24 games, so we are officially in the second half of the season now. The Avs are at .500, so it's almost like a clean slate if it weren't for the 11 teams ahead of them in the standings, but it's been an interesting past few games for the Avalanche. After finally getting Ryan O`Reilly back the Avs gave one of their worst efforts against the lowly Columbus Blue Jackets, then played a great game only to lose by a goal against rival Detroit, and then dropped a heart-breaker to the Blackhawks in the final minute, before finally clicking on all cylinders and drubbing the undefeated-in-regulation boys from Chicago, and downing SJ in OT. It seems the Avs are rounding a corner and everyone is buying in and putting in a solid consistent effort.

The returns of Johnson and Wilson no doubt have helped shore up a delicate Defense, but it seems like the nature of that last road trip helped to impress upon the young minds of the Avalanche that nothing is going to come easy and it's a playoff (Must Win™) type battle the rest of this short season. If the Avs had easily beaten Columbus, or rode that first game against Chicago into OT, they wouldn't have endured the painful sting of letting a game go. But with that bitter taste in their mouths, they seem to have righted the ship and charted a course for success - whether that path leads them to the post season is questionable, but at least we have reason to ask again.

Who's Fahrenheit 420°: Matt Duchene! Holy hell, this kid is a'blaze: 7 points in his last 3 games to go along with an offensive dominance not seen in an Avalanche jersey for sometime (and a unipron maybe never). Duchene linemate PA Parenteau is also hot, scoring 10 points in his last 6 games (my fantasy team thanks you PA!). Both players are averaging over a point per game on the season. And after going scoreless in his first 2 games back in Burgundy & Blue, Ryan O`Reilly has notched 4 points in his last 3 games and looks more like his old self. And let's not forget Avs' netminder Semyon Varlamov who's up and down play seems to be tabling after 2 impressive wins in a row, to go along with .943 save% and 1.93 GAA over that span.

Key (otherwise known as a jinx) to the Game: Stay out of the box. Edmonton has deadly PP. 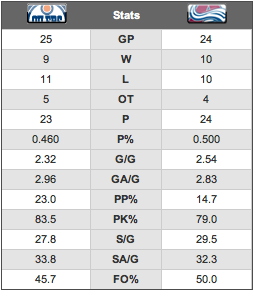