The Avalanche organization has a history of making roster moves that leave fans scratching their heads.

Share All sharing options for: Barrie the latest victim of perplexing personnel practices

From trades to signings, the front office often makes fans question what they're thinking and why they made the choices they did. This season has been no different apart from the fact that most of the questionable moves involved the defense.

When Greg Zanon was signed over the summer, Avs fans scoffed. It wasn't so much about Zanon's skill level as it was the type of player he is. On a d-corps already heavy with lower-tier defensemen, it just didn't make sense. Three weeks into the shortened season, frustration with his inability to do much besides block shots added to the bewilderment. Recalling Stefan Elliott from the Lake Erie Monsters only to have him spend more games in the press box than on the ice sparked criticism of Joe Sacco. The fact that he was playing no worse than Zanon and Ryan O'Byrne only confounded the issue.

But nothing has drawn more ire than the case of Tyson Barrie. After a strong training camp, the Avalanche felt confident enough in Barrie's skills to keep him with the big club. Sacco believed enough in him to put him on the opening night roster. After a shaky start with a series of games on the ice interrupted by healthy scratches, Barrie solidified himself as an Avalanche regular and NHL defenseman. He played 11 of the last 12 games before being sat for the March 8 rematch against the Chicago Blackhawks.

When asked why Barrie was being scratched, Sacco said the rookie had a bad couple of games where he was not playing up to his potential. However, the ice time and assignments Sacco had been giving Barrie, even in those two games, do not support this assessment. In fact, Sacco had done nothing but announce to the hockey world how important Barrie had been in the absence of the team's two top defensemen in Erik Johnson and Ryan Wilson. During that absence, Barrie emerged as the go-to guy for the blueline. He and partner Jan Hejda faced the opponents's top lines and succeeded. One need only watch the games to see that. The stats back that up, as well.

Jibblescribbits used cold, hard facts to do a superb breakdown of how important Tyson Barrie was to the team during his time in Denver. It shows how insane of a decision it was to send him back to play with the Monsters.

Jibs used Corsi to point out how the rest of the team performed when Barrie was on the ice compared to when he wasn't. 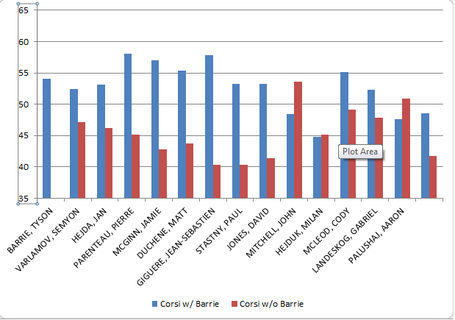 Those blue lines show the Corsi ratings of Barrie's teammates when he was on the ice. The red shows those ratings without Barrie. Stunning difference, isn't it? In comparison, Jibs also did graphs for the other defensemen, including Ryan O'Byrne, who has yet to be scratched despite putting up the worst performance of the team. His graph shows in full technicolor how O'Byrne pulls his teammates down in puck possession.

Jibs's article is a must read for the full impact of what the stats show about Barrie's influence on the Avalanche. To sum it up, though, here's a tidbit from it:

It's pretty conclusive that Barrie contributes to puck possession more than O'Byrne (and Zanon, Hejda, and Hunwick for that matter)

What makes this even more baffling is that it's pretty clear that, up until a couple games ago, the coaches saw the same thing. They saw a very good player in Tyson Barrie. Don't believe me: He led the Defense in ES TOI/game & PPTOI/game. As recently as the game prior to the one he was benched he was being sent out against Datsyuk and Zetterberg extensively. In fact 70% of his ES ice time was against those two forwards. And how did he do against those two? Well he was +7 in Corsi on the night (led team).

It's hard to believe that the coaching staff does not see the same things we are seeing and the stats are telling us. However, the scratches and, now, reassignment provide evidence to the contrary. But then again, perhaps it's not the coaches's decision after all. If all roster players became healthy, one guy would have to leave the team through a trade, waivers or reassignment.

There have been scouts at numerous Avalanche games over the past few weeks. Rumors that the Avs have been open to conversations about trading a defenseman have circulated the community. Could it be that the front office was hoping to get a deal done before all players were reactivated from injured reserve? With Hejduk's return imminent, a move had to be made. Without an offer in place, that move had to be reassignment.

A question comes to mind, though: why Barrie and not another defenseman who wasn't playing as well? That's a simple question to answer: all other defensemen would need to pass through waivers. Even with as poorly as some have played, there's no way they wouldn't get picked up. These are proven NHL players, and the Avalanche could not lose them for nothing.

So why not send a forward down and carry eight defensemen? Many feel Patrick Bordeleau does not offer enough to the team to keep him on the roster over the rookie d-man. However, Bordy would also have to pass through waivers, and despite what some people think, he's shown he can play a fourth-line role at the NHL level. The risk of being claimed is too great. Besides, the Avs see something in Bordy they like, so it's unlikely he would be going anywhere anyway.

The only forward who is free to move between the AHL club and the Avs is Mark Olver. He's been a regular healthy scratch for the past couple of weeks, so many people expected him to be the one to return to Lake Erie. There are a couple of things that might have dissuaded the Avalanche from choosing him. First, he is as developed as a hockey player as he is going to be. Sitting Olver is not going to impede his growth like sitting Barrie might. The staff may have seen it as a better idea to get Barrie ice time in Cleveland than sit in Denver. Second, Olver has a one-way contract next season. Would that come into their decision-making process at all? Perhaps.

Logistically, sending Barrie down makes some sense. Waivers are a bitch. Logically, however, another choice would have been prudent. Tyson Barrie was the best defenseman on the ice for many of the games since mid-February. For a team that is struggling offensively and having difficulty moving the puck out of its own zone, it makes no sense to remove from the roster the defenseman that is producing the most and controlling possession the best.

It makes no sense unless something bigger is on the horizon, that is. In makes no sense unless it's the front office—not the coaching staff—making those decisions. Sadly, Barrie was having a break-out year before management pulled the plug. He blossomed from a young kid who questioned his own play to a true NHL player who knew he had the ability to not only hang with the big boys, but to also thrive in the NHL environment. Will this move hurt—both Barrie and the Avalanche—more than it will help? Only time will tell, but just the possibility should have given the front office enough pause to say, "No, we can't risk it. Keep Barrie in Denver."