Share All sharing options for: Stars at Avalanche, Game 29 Preview.

After losing 4 in a row, the Colorado Avalanche (10-14-4) will attempt to right the tank ship against the Dallas Stars (13-12-3) tonight in Denver. The Stars recently overcame their own 4-game losing streak when they found were handed victory against the accommodating Calgary Flames on Monday.

The Avs' captain has been doing his best to will his team to end the losing streak, collecting a goal in each of the past 3 games, but it hasn't been enough as the Avs have suffered defensively allowing 20 goals over the last four games for an average of 5 goals against per game. FIVE. 1, 2, 3, 4, 5.

The Stars recently got back two of their offensive weapons with Jamie Benn returning from a wrist injury and Ray Whitney from a foot injury. Those two are playing on a line with newish acquisition Erik Cole to form the Stars' top trio. Whitney has 4 points in his last 3 games. With the Stars finally healthy again they actually boast a decent lineup, even with a couple of 40 year-olds.

Kari Lehtonen is the man between the pipes for Dallas, but on Tuesday the Stars announced they sent back up Richard Bachman down to their AHL affiliate and called up highly toted American product Jack Campbell. The Stars are starting back-to-back set tonight so it is possible that we could be privy to the NHL debut of the talented 2010 11th-overall pick tonight.

This is the second meeting between the Avs and Stars (who will be division rivals under the new alignment next season) with the Stars winning the first contest 3-2 at Pepsi Center.

[UPDATE: WILSON OUT, ELLIOT IN] 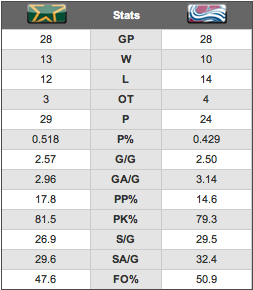