The Scratch: Colorado With or Without Jamie McGinn

A WOWY comparison, and a look at who really drives the first line. DANGER: Maths Content, but don't worry, it's all explained.

Share All sharing options for: The Scratch: Colorado With or Without Jamie McGinn

Joe Sacco made a lot of people a lot of angry when he announced Jamie McGinn would be a healthy scratch for the game against Dallas on Wednesday. (He also scratched David Jones, but David Jones has been bad, so presumably the only people angry were the people paying tens of thousands of dollars for a guy not in the lineup.) The general sentiment was he helps drive the first line to success, he puts a lot of shots on and at net, he creates space for Matt Duchene and P.A. Parenteau, he plays physical, and so forth.

Of course the scratch can also be explained by the fact that, in the last month (games after Feb. 18), McGinn has 1 goal and 1 assist.

But scratching a guy implies that the team is better off without him in the lineup than with him, and that, frankly, has drawn the bile to the throats of Avs Nation. So to see if that's justified bile or not, let's have a WOWY look at McGinn.

WOWY, if you didn't know, means With Or Without You, kind of a cheeky name for an analysis to be honest. WOWY is used to capture a player's contribution to the stats of others. In this case, we're comparing players' numbers when McGinn is on the ice versus when McGinn is not on the ice. If you score 10 goals, and 6 of them happen when I'm on the ice, that means 4 don't; a WOWY analysis of your Goals For relative to me would therefore show 6-4 = +2. The conclusion would be that you are more likely to score with me than without me.

So what I've done here is taken 5v5 stats from the WONDERFUL HockeyAnalysis and made some graphs out of them.

This first graph (click it to embiggen) compares Goal Differential/20* and Corsi Differential/20** for every skater Jamie McGinn has played at least 50 minutes with. (In all honesty that's probably too small a sample size to really be meaningful at the low end.) You can see McGinn brings a negative GD/20 here, but fairly strongly and consistently, he improves CD/20. Together that implies he has helped drive puck possession but has been getting furiously unlucky in the goals department. (In case his 972 PDO and outrageously low S% didn't already imply the latter. 878 on-ice SV% is brutal.) 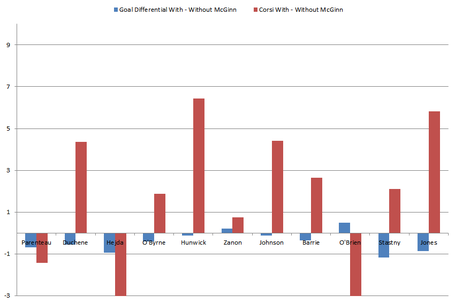 So yes, it would have made a lot more sense to merely demote McGinn than to bench him outright, and what's more is Sacco seems to have been doing that lately. At the very least McGinn's ice time has fallen into the 13-15 minute area in the last week or so. But mainly he's still playing with Dutchy and PA, and he's got regressing up to the mean to do.

But what about arguments relating to the top line? Is his poor output, luck driven or no, actually holding back his linemates, or is he helping their numbers? 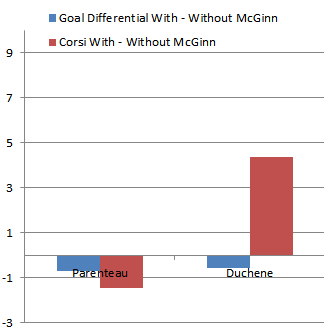 Well, again his on-ice SV% is probably driving that GD/20 issue, and his comparison with Parenteau is pretty negligible. -1.16 CD/20, for players getting about 10-15 minutes of 5v5 ice time together, is about a shot attempt against per game difference. However, +4.37 CD/20 with Duchene drives about 4 shot attempts for in a game. So is he a huge effect? Not really, but he's not an anchor either. Overall, I'd call him slightly beneficial based on this.

Many of us were curious at the least after this decision was made. Some were outright furious. I personally was more on the benign side of reactions and ran these numbers hoping to show that McGinn was having a negative effect on his linemates. The numbers don't bear that out. McGinn helps his team possess the puck and has in all likelihood been very unlucky.

His scratch? A real head-scratcher.

P.S.: So where is the strength of the top line coming from, I wondered? Two of those guys have a point per game. Here's a hint: 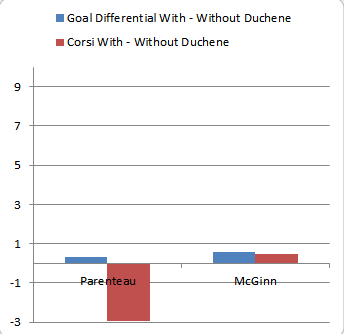 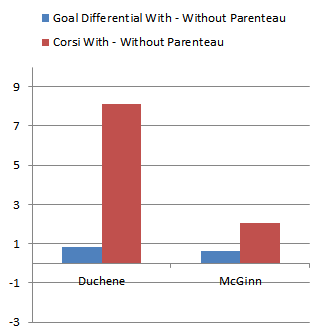 P.A. Parenteau you lovely hockey player. He boasts a positive goal differential with Duchene and McGinn (+.814 and +.636 GD/20 respectively), but as that's essentially +/- and therefore chock full of noise, look instead at his contribution to puck possession (+8.12 and +2.07 CF/20). There's your engine for the first line.