Flames jump all over Avs early, stifle any comeback.

Share All sharing options for: Flames Hold Off Avs 4-3

Some bad jokes to start the game by Peter McNab about Miikka Kiprusoff hilariously not having a baby, because - wait for it - he's a man and his WIFE had the baby - NOT KIPPER!! Rollicking, rib-tickling color commentary Peter, thanks.

Thankfully a frenzy of fist-a-cuffs erased the early sour McNabian influence to the game when McGrattan and Bordeleau dropped the gloves just 2 and 1/2 minutes in. Neither man tried to dodge a single punch as they traded right hand bombs for what seemed like a full minute [note: it was about 15 seconds, which equals about 74 minutes in real time]. Both enforcers entered their respective penalty boxes with their faces recolored multiple shades of red. Old school hockey fight.

Then some actual hockey happened as Varlamov made a sliding save on Parenteau's deflection of a cross ice centering pass intended for Lee Stempinak. That could have been a deflating own-goal, but instead turns into a decent defensive play by PA - as we're becoming accustomed to.

The Flames would score a powerplay goal with 11:50 to go in the first when Jiri Hudler batted in his own rebound perched atop the crease. Ryan O`Byrne got caught between Hudler and an open man on the far side of the net and so ended up not really guarding anybody as he went down on all fours in front of Varly - metaphor for the Avs season? Perhaps.

The Avs went on the man-advantage after Comeau boarded Eric Johnson. It wasn't the most viscous boarding ever, but it was certifiably stupid. Johnson was facing the boards for a couple seconds before Comeau skated up with plenty of time to reflect upon his options, and he still chose to hit Johnson in the #6 on his back. No worries for the Flames though as they killed the meager Avalanche powerplay without a second thought and then quickly scored a soft goal as they caught Varly with an unexpected pass/shot/prayer. 2-0 Calgary. It all worked out so well for the Flames that they put the Avs back on their inept powerplay so they wouldn't have to play defense for 2 minutes.

Avs would kill off a late Calgary powerplay to end the first. A period in which they were out-shot 14 to 2. Yeah. That's ugly mathematics.

About 4 minutes into the 2nd period Jamie McGinn gobbled up a goal by cashing in on a big rebound off a PA Parenteau shot. The good feeling didn't last long though as the Flames answered back just 12 seconds later off a big rebound of their own. 3-1 Flames.

Duchene made a break-neck charge up ice and almost popped the puck over MacDonald, but the Flames' netminder reached back and gloved the puck out of mid air as it was bounding toward the top of the net. Maybe that sparked the Avs because Gabe Landeskog got a goal when his pass to Palushaj hit the side of the net and redirected in off of MacDonald to bring the Avs back within 1.

No doubt jealous of all the attention Bordy and McGrattan got from their heavy-weight match, McLeod and Jackman dropped the gloves after the Avalanche captain's goal. It was a respectful bout but nowhere near the entertainment value of the night's opening round.

Mike Cammalleri made it 4-2 off a pretty one-timer from the bottom of the circle, his 2nd goal of the period and game. Both teams would trade ineffective powerplays to end the period.

Play tilted towards the Calgary end in the third as the Avs poured on the pressure. Eric Johnson (who had a few smooth stick-handling displays) drew a tripping penalty, sending the Avs back on their dazzling powerplay. Luckily, Alex Tangauy lifted Ryan O`Reilly's stick into Landeskog's mouth which broke badly for the Flames resulting in a 5-on-3 for the Avs. The Altitdudes quickly pointed out the the Avs had failed to score on their four 2-man advantages this season, doing their best to reverse jinx a goal - and it worked. Hejduk broke his stick on a shot, sending the puck to O`Reilly at the side of the net. The Avs' newest point-per-game player made no mistake and buried to make it 4-3 Calgary.

The Avalanche pulled Varlamov with just over a minute to go but couldn't force it to OT. Another loss. And the tank rolls on.

The tank rumbles into Vancouver as the Avs finish off a quick back-to-back Western Canadian road trip against the Canucks Thursday, 8pm.

I took this screen shot as the game ended. She looks like she is about to rape herself a camera man (or camera woman - I don't judge). I think we might need a hump day caption thread.... 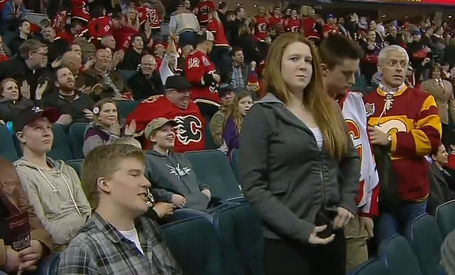