Share All sharing options for: The Final Countdown: Avs at Blues Preview

With the Tank off it's treads, the Avalanche ease on into to the Gateway to the West to visit the St. Louis Blues tonight on the tail end of a home-and-home series. The Avs slapped around the playoff-bound Blues the last time around 5-3 in Denver and the Blues will look to exact some revenge as they try again to clinch a post-season berth.

Colorado has sported a 3-1-2 record since J.S. Giguere's friendly pep talk roused his teammates out of their Dreams of Vegas Slumber™, and as a bonus, the Avs still maintain a good shot at a top 3 draft pick. Can a back up goalie wear the "C"? Or at least an "A"? Or can he also coach? Somebody look into the rule book.

Jamie McGinn, the Human Palindrome, reeled off 3 points last time out against the Blues and has improved as the season has drawn on, hitting less posts and more twine. For those who are wondering from whence the moniker "Human Palindrome" derives, here you go: He wears #11. His stat line is : 11 goals, 11 assists, for 22 points, in 44 games. That's some eerie Twilight Zone shit right there.

Let's be honest, not much importance to this match up, but at least fan's pang of sadness has been replaced lately with casual indifference. Go Avs. Or not. No big. 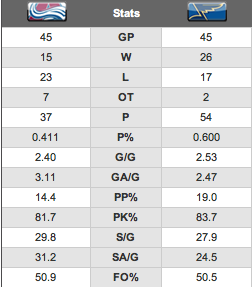