USA Hockey announced today that Avalanche center Paul Stastny has been given the captaincy for the 2013 U.S. Men's National Team in the upcoming IIHF World Championships. Matt Carle and Nate Thompson of the Tampa Bay Lightning will be the alternate captains.

Stastny has a long and storied history with USA Hockey. He's played on Team USA on three separate occasions, including the 2010 Olympic team. He and his teammates took the silver in that contest after a surprising run to the gold medal game and an exciting overtime finish. Stastny also represented the United States in the 2007 and 2012 IIHF World Championships, registering 8 (4g, 4a) and 9 (3g, 6a) points respectively. He was also the top forward in the 2004 Viking Cup (6g, 5a) as part of the US Junior Select Team.

Other Avalanche players on Team USA include Matt Hunwick, Erik Johnson, and Aaron Palushaj. Former Avalanche head coach Joe Sacco will be leading the team from behind the bench.

The US takes the ice for their first game against Austria tomorrow (Saturday, May 4). The game is at 12:15 pm local time (3:15 am MDT). It can be seen live on NBCSN or streamed via their website at NBCSports.com. 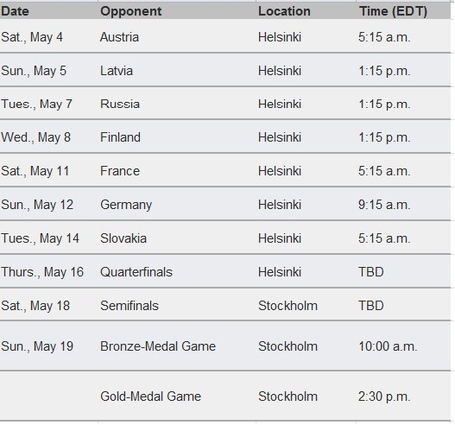