Share All sharing options for: One Reason Why Bergeron Deserved the Selke and also SCF Game 2 Open Thread

So Jonathan Toews won the Selke yesterday. Since that's supposed to go to the best defensive forward, I decided to have a look at the numbers I already had comparing forwards' possession metrics to their usage. Unsurprisingly, more offensive zone starts correlates with better relative Corsi*, but there are a some extreme outliers. Toews ain't one of em.

The x-axis on this scatter plot is offensive zone starts (%OZone), and the y-axis is relative Corsi per 20 minutes (Corsi rel/20), among forwards who played 20 games and 100 minutes in the 2013 season. A dot farther to the left is deployed by his coach more defensively, and vice versa. A dot higher drives possession more. 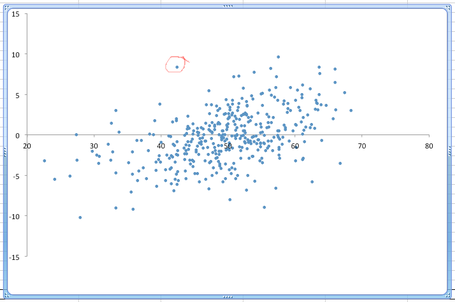 With 55.1% of his shifts starting in the offensive zone, Toews's +5.1 relative Corsi/20 is on the higher end of average. He was deployed in a more-scoring role and did a good job there. Meanwhile the dot I've circled for being on its own fucking plane of existence is Patrice Bergeron.

Judging against the rest of his peers, maintaining a holy shit +8.317 relative Corsi/20 despite only starting in the offensive zone 42.4% of the time is absolutely outstanding. Bergeron was deployed in order to hold the line for Tuukka Rask, and he's done it better than anybody in the league by a country mile. No I haven't taken things like quality of teammates or competition into account, but since that's only slightly better than meaningless to compare between teams anyway, I feel pretty good saying this is one solid bit of evidence for Team Patrice Bergeron Got Punched in the Solar Plexus by the Awards Voters.

Anyway, those two play tonight. You missed out on an instant classic if you didn't see Game 1, so tune in with us to Game 2 just in case it's even half as good.

*in case you forgot, relative Corsi is a comparison of your team's shot attempt differential with you on the ice and off the ice, at 5v5. it correlates heavily with puck possession. High relative Corsi means your team has the puck while you're on the ice more than when you're off the ice.