Let's take a step away from the draft debate for a moment to look at the Avs' potential trade situation, specifically when it comes to Top 6 Forwards.

The Avs Top 9 is a bit of a mess right now. Until last year, our roster was designed to roll three fairly even lines anchored by Duchene, O'Reilly, and Stastny. However, this "Three 2nd Lines" concept went out the window the second Duchene decided to become a true #1C. As a result, a more traditional setup with a defensive 3rd line now makes sense for us, but it also means that some of our best players just became potentially awkward fits in our lineup. Three in particular come to mind: Ryan O`Reilly, Paul Stastny, and David Jones.

Since three of the Avs Top 6 spots are claimed by Landeskog, Duchene, and Parenteau, the competition for the remaining Center (Stastny/O'Reilly) and RW (Jones/Downie) spots will be especially fierce this year. Given the team's glaring deficiencies in other areas - namely defense and left wing - there is a high probability that one or more of these players could be moved before the trade deadline, perhaps as early as this year's draft. We can't afford to keep redundancies on the roster, so which players fit into our long-term plans, and which should Sakic and Co. look at trading?

Even though Downie isn't likely to be moved, I included his numbers in order to compare them to Jones. I believe that if Downie is determined to be the better player, it makes sense for Jones to be dealt because he doesn't have a skillset that would be of much use in the bottom 6. On the other hand, if Jones wins out, Downie will slot comfortably into the 3rd line RW role and we'll be able to keep them both.

Stastny vs. O'Reilly is a more clear-cut argument. Since the options available for the loser will be A) sacrificing his 2-way ability at left wing, B) becoming an overpaid defensive 3rd line center, or C) being traded, I have a feeling that the most beneficial choice for the Avs could be C. A young, reliable 2-way centerman could bring back quite a sizable return that would help correct a number of issues elsewhere on the team.

*Note: Downie's totals from '12-'13 were not included since 2 games was determined to be too small of a sample size.

These charts are essentially looking at the normalized output over the the course of careers. I wanted to minimize the affects injuries would have on the numbers, so I took the per-game rate for goals, assists, points, and shots and multiplied them by 82 games. %MAG is the percent of their total goals that were scored on the man advantage, and QoC (Quality of Competition) shows where they rank in comparison to their forward teammates when it came to playing other teams' top players. OZS% (Offensive Zone Start Percentage) determines if they started mostly in the offensive or defensive zone and OZC% (Offensive Zone Change Percentage) shows if they mostly gained or lost possession. Don't worry, graphs and further explanations are coming. 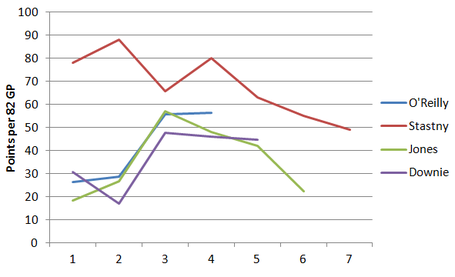 There's no contest: First-4-Years Stastny is by far the best player on this chart when it comes to offense. He completely blows everyone else out of the water, and from watching these players play, I can guarantee that he has the highest offensive ceiling of the lot. However, Stastny circa Years 5-7 hasn't been all that great. Perhaps it's his linemates, but unless he can rebound, he's not that much better than where O'Reilly is right now.

It's also interesting to note that Jones and Downie's average points-per-season are 36 and 37, respectively. Jones has the edge in goals 20 to 15, but he only averages around 16 assists per year. He's clearly a finisher, but he's fairly one-dimensional in that role. When one considers everything else that Downie brings to the table, is sacrificing around 5 goals a year worth the added toughness and assists? 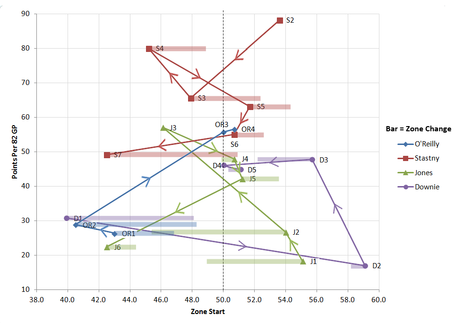 This chart looks at who made the best of a bad situation when it comes to defensive minutes. Typically, players who get a zone start greater than 50% (right side of the chart) tend to score more or are younger players being eased into the league. The bars indicate Zone Change %, or whether the player typically gained or lost possession on their shifts. Also, the labels indicate what season the data points are representing, and the arrows indicate the player's progression over the years.

Once again, First-4-Years Stastny is by far the best player on here. Not only did he score tons of points while starting in the defensive zone, he also has managed to overall gain possession instead of losing it every year he's been in the NHL. In fact, last year's 8.4% Zone Change (red bar near the 42.0, 50 coordinate) is the best on this chart. He's a player that finds a way to score even when starting on defense.

O'Reilly is no slouch either. Even as a rookie, he was starting in the offensive zone only 43% of the time. Once he was finally allowed around a 50% zone start, his scoring jumped to a level that was very similar to Stastny's when given comparable minutes. However, it should be noted that Stastny still had a better Zone Change % during his 6th season than O'Reilly had in either his 3rd or 4th year, meaning Stastny was able to transition from the defensive to offensive zone more effectively than O'Reilly.

Downie and Jones are all over the place. Downie's erratic numbers are due in part to the fact he's played on 3 teams and his usage has varied greatly between them, but Jones has very similar zone starts to Stastny since his 3rd season, implying they've been on the same line since then. His two years without Stastny were disasters, so it does make one wonder how much influence Stastny has had on his numbers (and vice versa). It's also worth noticing that when Downie and Jones were given similar zone starts (50.0 to 52.0 range), they shared similar point totals. Jones had a better zone change percentage in his 5th year than Downie, but other than that, yet again, the two are fairly equal. 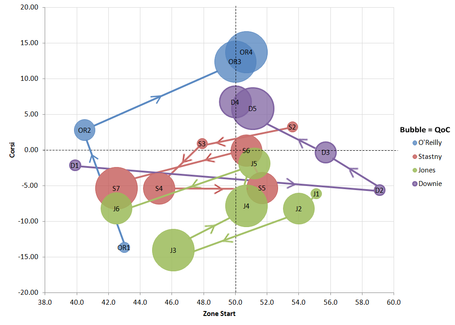 Corsi a measure of possession. The idea is that if you're outshooting your opponents, you have the puck more of the time, but if you're being outshot, you're spending more of your time on defense. Quality of Competition measures how strong the Corsi of your opponents is, so for this graph, the bigger the bubble, the better the opposing players. Basically, having a big bubble both high (positive Corsi) and to the left (defensive zone starts) on this graph is indicative of a very skilled player.

O'Reilly and Downie clearly stand out. They both have giant bubbles very high on the chart, meaning they are possession machines. When they're on the ice, the puck is being shot at the opposing net most of the time even when they're facing off against very good players. It should be noted that Corsi is highly influenced by the actions of linemates, so it's hard to determine how much influence Gabe Landeskog and/or Steven Stamkos (in Downie's case) are having on their numbers. However, based on the strength of their Corsi and the data from Chart 2, it's still pretty safe to say that both Downie and O'Reilly are able to generate a lot of offense even when facing top players.

Stastny and Jones, not quite as much. Based on Chart 1 and 2, they obviously find a way to score, but they don't generate as many chances as they face. Even when they're mostly getting offensive zone minutes, they're still giving up a lot of shots. Since they're both at or above the level of O'Reilly and Downie offensively, this indicates that they're weaker defensively than their counterparts. It does however make you wonder what sort of numbers Stastny in particular would have if he was paired with someone like Landeskog. Would they be better or worse than O'Reilly's?

The Avs have some very difficult decisions to make. Both sets of players are surprisingly evenly matched, so off-ice factors could come into play. This is particularly true at center. Stastny is unfortunately UFA at the end of this coming year, and unless he's paid and played like a Top 6'er, his ties to Denver aren't going to be enough to keep him from walking. O'Reilly is also an upcoming RFA with a $6.5 million qualifying offer. He can't be traded until late February, and he has a history of playing hardball with management. Stastny is 27 and already in his prime, while O'Reilly is 22, matches the age-group of our core, and still has room to grow. While Stastny has a higher offensive ceiling, he's not shown it much in the past three years, and when you add in O'Reilly's possession numbers, and there's not a clear-cut "better player" between the two of them. Should we extend one, trade the other, and bring in a true 3rd line center via UFA, or should we just bite the proverbial bullet and keep both at $6+ million a year? There isn't an easy answer.

The matchup at RW isn't any simpler. Jones is a scorer and only a scorer. He's a pretty good player if used in a very offense-oriented role, but he's fairly worthless otherwise. Downie is a much more complete player who brings toughness, attitude, defense, possession, and playmaking to the table along with a fairly similar offense. If the Avs are in fact looking to create a more physical Top 6, Downie's our guy. We can definitely keep both of them, but is the team willing to create the specific situation Jones needs in order to be effective at the cost of others on the roster, or are we better off cutting our losses and seeing what we can get for him in a trade? His idiotic contract makes him near impossible to move, but with his goal-scoring history, some team in need of offense (Hi Nashville!) might be willing to take the chance that he can become a 30 goal scorer.

To complicate matters further, the Avs are reportedly looking at taking a forward at the draft. LW Jonathan Drouin would fit into our lineup splendidly given our weakness at that position, but if we draft MacKinnon or Barkov, our #2C battle becomes even more intense. Even if Mac moves to right wing, Jones' roster spot will become even more precarious than it already is. There are also some rather interesting free-agents available this summer, and prospects Michael Sgarbossa and Joey Hishon could be in the mix by training camp. Any of these potential upheavals could have a direct effect on the situations surrounding Stastny, O'Reilly, and Jones.

Having too many good players is a nice problem to have, but it is still a problem. Sorting through this mess will be one of the first major challenges our new front office will be forced to face, and the choices they make now will determine the direction of the franchise well into the future. No matter what they choose, it's going to be a very interesting next few months. So, buckle up, Avs fans. We're in for a bumpy ride.