As the off-season drags on, MHH will be taking a look back at the history of hockey (specifically the NHL) and how it became the game we know today.

Or, that is to say, hockey had A beginning in Montreal. Ball and stick games - even ones played on ice - have appeared in numerous cultures dating back to pre-Christian times. The Dutch, Irish, Scots, and English all had variations that their immigrants transported to the New World, and even the Native Americans, specifically the Teton-Sioux, played a ball and stick game on ice using carved buffalo shoulder bones as skate blades. The term "hockey" itself is thought to derive from the French word hoquet (a shepherd's crook) or hoghee, an Iroquois word meaning tree-branch.

By the mid-1700's, ice hurley games (the northern version of a popular Irish sport that is hockey's most direct ancestor) were well documented across not just eastern Canada, but the Northeast US as well. However, it was still an unorganized outdoor pastime that had very little following outside of lower-class ethic bounds.

That all changed in 1875. James Creighton, a well-educated young engineer from Halifax who had grown up around ice hurley, had been lured to Montreal to work on the Lachine Canal project in 1872. He was a member of the upper-class Anglo community and a noted sportsman, and by 1875, he had become heavily involved with rugby football. As such, he wanted to find a way for his teammates to stay in shape during the long winter, so he used his connection as a figure skating judge at the downtown Victoria rink to move the game from his childhood inside.

This was significant for a number of reasons. First, it sparked a few innovations to the game. Since the rink was only 85 by 200 feet, the number of players on each side was limited to 9. A round disk of wood acted as the puck, and the 6' tall goal markers were placed eight feet apart and parallel to the long end of the rink to avoid scoring on a long shot. Players had to stay "on-sides" behind the puck and just like in rugby, passes could only be made laterally. No players substitutions were allowed, and play was confined to two 30-minute periods with a 10 minute break in between. Only an 8 inch platform separated the fans from the action, so the puck was to remain on the ice and sticks (imported from Nova Scotia and crafted of the hornbeam tree by Mi'kmaq natives) couldn't come above their shoulders. When rule infractions did occur, they were seen to be unintentional, so no penalties were assessed and the game would be restarted in a way that favored both sides equally. Over the next few years, Creighton would continue to refine these rules - later dubed the "Halifax Rules" - and published them in 1877.

However, the March 3, 1875 game had a wider impact than simple rule changes. It broke a class barrier and introduced the game to the Anglo elite. Even though there were no seats, walls, or heaters, the fancy covered Victoria Rink and its gas lights were much more appealing to the upper class than wind-swept rivers and ponds used by the Irish and French immigrants. Since amateur sports were a popular pastime of the upper class at that time, the introduction of hockey into their culture allowed it to evolve, standardize, and spread from city to city in a way it never had before. So, while James Creighton didn't exactly invent hockey, he is still widely seen as the father of the modern game, and Montreal (in some places, grudgingly) is regarded as its birthplace. 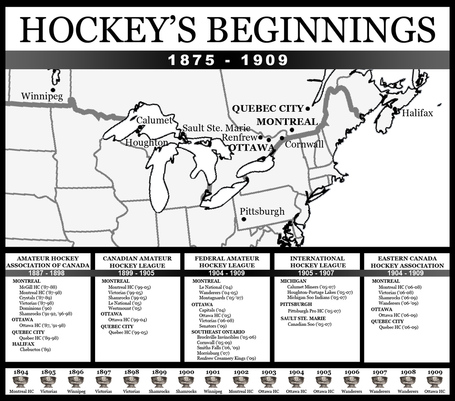 Hockey began to spread in the 1880's. In 1883, it was a part of the Montreal Winter Carnival and featured 3 teams: two from Montreal and one from Quebec. However, since the team from Quebec only had 7 players, the Montreal teams agreed to play with 7 instead of the traditional 9-per-side. This trend caught on and become the standard until 1911. Ottawa, Kingston, and Toronto all became hockey hotbeds over the next few years, and by the 1890's, the sport had spread west to Rat Portage (now Kenora), and Winnipeg. College students and young male members of the Anglo-upper class were largely responsible for the migration of the sport, and even American universities like Yale and Johns Hopkins were involved.

Even though Ontario and Manitoba each had their own amateur hockey association by 1892, the schedules for inter-city matchups were irregular at best. In an effort to standardize a schedule, five clubs (McGill HC (university team from Montreal), Montreal HC, Montreal Crystals, Montreal Victorias, and Ottawa HC) formed the Amateur Hockey Association of Canada (AHAC) in 1886. They originally set up their championship as a challenge system similar to that of American baseball, but after an odd situation where a team with just one victory ended up as the winner, they opted to pronounce the team with the most wins the champion.

Around this time, a certain Lord Stanley of Preston had taken up residence in Ottawa. He had been appointed the 6th Governor General of Canada in 1888 and fell in love with hockey a year later at the annual Montreal Winter Carnival. Such was his love for the game that in March 1892 he wrote a letter to an aide suggesting that there should be a trophy to present to the leading hockey team in Canada. Later that year, Captain Colville, another aide of Lord Stanley, visited G.H. Collis, Silversmith, in London, England to pick up what would become the Dominion Challenge Trophy, now known as the Stanley Cup. Lord Stanley paid 10 guinea for the fancy punch bowl, or roughly $1250 in modern US dollars.

Once in Canada, two trustees were appointed to make sure that no one team would lay exclusive claim to the trophy. In order to do so, they decided on a challenge format: the senior league in possession of the Cup would be named its first winner, and upon the discretion of the trustees, the champions from other leagues would be able to challenge for it in either a 1 game, 2 game total-goals, or 3 game series. Apart from a brief stay in the Manitoba Hockey Association under the care of the Winnipeg Victorias in 1896, the Dominion Challenge Trophy stayed firmly rooted in the AHAC.

That is, until 1898. The AHAC included intermediate and junior clubs in addition to the five senior teams that were able to compete for the Cup (Montreal Hockey Club, Montreal Shamrocks, Montreal Victorias, Ottawa Hockey Club, and Quebec Hockey Club). One of the intermediate teams from Ottawa - the Capitals - had been granted admission into the senior league by the AHAC board, which angered the other owners. They therefore broke away from the AHAC and formed the Canadian Amateur Hockey League (CAHL).

As the attendance and media attention increased for the new league, so did the need to add better players to stay competitive and keep the gate money coming. Many teams began looking to the middle class for infusions of talent or offering side jobs and secret pay to keep their good players on the roster - both precursors to the professionalization of hockey. Other loopholes existed, such as giving silver nuggets to all seven roster players after Ottawa's 1903 Cup win, thereby coining the nickname "The Ottawa Silver Seven".

A bitter war sparked between the two leagues, particularly when the Ottawa Hockey Club of the CAHL - the current Stanley Cup holder - felt they had been treated unfairly and switched to the FAHL mid-season. The next year, the CAHL tried to woo back Ottawa HC and the Wanderers, but only the Montreal Nationals joined the league. The competition only got worse with the introduction of the International Hockey League (IHL), an openly professional league based in the US and Sault Ste. Marie, that was recruiting top Canadian players. Add in the fact that Montreal simply couldn't support 7 senior teams, and something needed to be done.

In December 1905, four clubs from the CAHL (Montreal Victorias, Montreal HC, Montreal Shamrocks, and Quebec HC) and two teams from the FAHL (Montreal Wanderers and Ottawa HC) secretly combined forces to form the Eastern Canada Amateur Hockey Association (ECAHA). They were the first league to elect a 3rd party president instead of rotating the seat between club owners, but more importantly, they were first to allow professionals into the amateur league just as long as their status was printed publicly. However, both the Victorias and Montreal HC were apprehensive about turning professional, so they split from the ECAHA in 1908. The remaining clubs then officially dropped the "Amateur" from their title and became the Eastern Canada Hockey Association (ECHA).

Unfortunately, there were very few rules governing the poaching of players, so salaries got out of control quickly. One team, the Wanderers, was sold multiple times before coming into the possession of P.J. Doran, the owner of the cross-town Jubilee rink. He intended to move the club from the Montreal Arena (capacity 7000) to his rink (capacity 3250). Fewer seats meant less income, and since the two playing teams split the gate money, the other teams were clearly not happy. Also, the former Wanderer ownership suddenly had a change of heart and wanted to reclaim the team. The stress from these issues tore the ECHA apart just before the start of the 1909-'10 season.

The two leagues that came from the dismantling of the ECHA wouldn't create any more stability in the hockey world. Just like these early leagues, both of them were gone within the decade. However, the circumstances and personalities that shaped those rocky 7 years would directly lead to the formation - and longevity - of the National Hockey League.

Sources: Putting a Roof on Winter by Michael McKinley (Greystone Books, Vancouver, 2000) and Lords of the Rinks: The Emergence of the National Hockey League, 1875-1936 by John Chi-Kit Wong (University of Toronto Press Inc., 2005)