Hi, I'm Rob Vollman. You may know me from ESPN Insider, Hockey Prospectus and Player Usage Charts. And yes, I'm a hockey analytics guy, and in fact I just came out with a new book called Hockey Abstract.

I know many Colorado Avalanche fans had a bad experience with hockey analytics a few years ago. There are no doubt some significant mistakes and pitfalls to the use of analytics, which is why my new book is focused on its mainstream applications and limitations. That's also why Cheryl invited me to write a fan post to demonstrate what analytics can really tell us.

First let's start with a Player Usage Chart. It's always a good place to start because it graphically portrays how a player is being used at a single glance, which puts everything else into context. Even when looking at traditional statistics like goals and assists, nothing exists in a vacuum - you need to know how players are being used.

The chart is simple. Those who start their shifts in the offensive zone are on the right, and in the defensive zone on the left. Those playing against top line are at the top, and those who more typically play against depth lines are near the bottom. The bubbles represent how well Colorado does in terms of attempted shots (also known as Corsi), relative to everyone else on the team. Shaded means they out-shot their opponents, white means they didn't, and the size of the bubble indicates the extent. Here's how it looks for 2012-13. 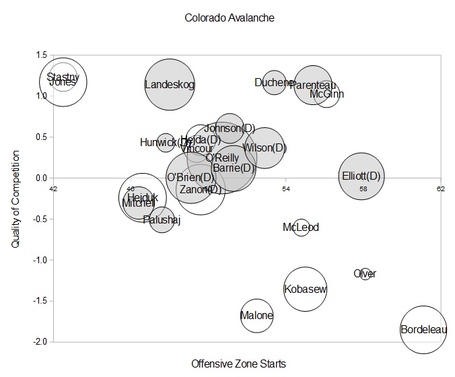 It's a little messy because most players are clumped in the middle. With a few exceptions the Avalanche players got roughly comparable assignments. Stastny, Jones, Landeskog, Duchene, Parenteau and McGinn are the six forwards used mostly against top-six competition, and in that order from the most defensive deployment to the most offensive. Given this assignment it's almost to be expected that Colorado was out-shot with Stastny and Jones on the ice (Jones more so than Stastny), but it's unusual that they were out-shot with McGinn, who got to start his shifts in the offensive zone far more often.

The defensemen are used in very similar fashion, except for Stefan Elliott who is used in a more offensive capacity.

That Player Usage Chart features even-strength situations only. The Special Teams Usage Chart (or "STU") shows how many minutes per game each player worked the power play (horizontal axis), killing penalties (vertical axis) and how much ice-time they got at even-strength (the bubbles). Shaded just helps identify the defensemen. 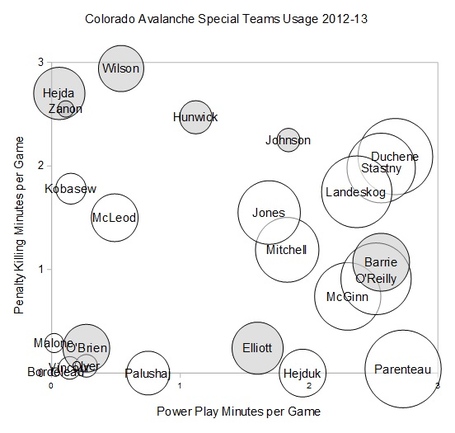 On defense Barrie and Elliott are the power play regulars, while Hejda and Wilson are the defensive specialists. O'Brien was used regularly at even-strength, but not special teams.

Up front the Avalanche don't really have defensive specialists, but rather a core of players they rely on in all manpower situations, most notably featuring Matt Duchene, Paul Stastny, Gabriel Landeskog. Some of them, like P.A Parenteau and Milan Hejduk, and to a lesser extent Jamie McGinn and Ryan O'Reilly, are used mostly just for the power play.

Speaking of offense let's look at Colorado's Total Offense chart for the 2012-13 season. It shows the average shots per 60 minutes on the horizontal axis, and passes (that result in shots) per 60 minutes on the vertical axis. This really shows, at a glance, who was generating the offense, and how they were doing it. 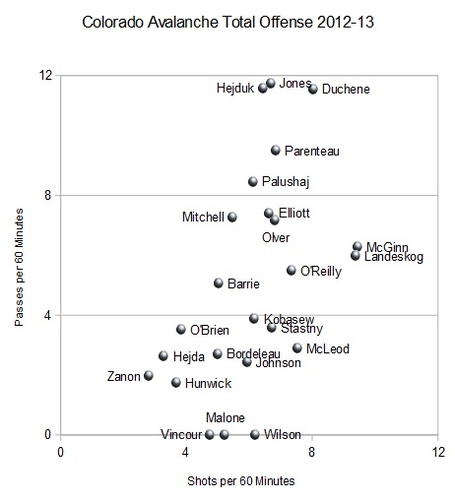 Hejduk, Jones and Duchene were the big passers, McGinn and Landeskog were more shooters. Among defensemen Elliott really stands out making passes and taking shots. It's surprising to see Stastny's offense instead comparable to defensemen, and to depth players like Kobasew and McLeod.

Ok last chart, the Cap Efficiency chart. This one has the player's cap hit (over 82 games) on the horizontal axis, the player's over-all performance on the vertical axis, and a big fat line showing the so-called "break even" point for each player. Over-all performance is calculated in terms of Goals Versus Threshold (GVT), a non-traditional statistic that tries to summarize all of a player's contributions with a single number. It's not perfect, especially with defensive-minded players (as you might be able to tell), but it's a start. 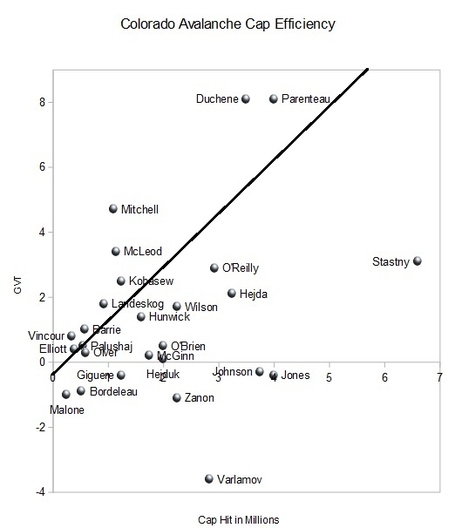 Again, it's mostly the defensive-minded players (and goalies) that are below the break-even line, but that should be taken with a grain of salt as one of GVT's shortcomings. Duchene and Parenteau provided good value even with that hefty price tag, whereas Jones and Johnson did not.

Paul Stastny is one interesting guy to look at with these charts. He's paid a lot of money and may appear to come up way short, but he also seems to carry a fair deal of the defensive responsibilities. Clearly he had a weak season offensively and would look much better if he bounced back.

That concludes a very quick and high-level demonstration of how analytics can be used to study the Colorado Avalanche. This article was just a few charts and a couple of sentences, just as a teaser of what analytics can do.

If you'd like something a little bit more thorough, I'd be happy to come back. You can also visit my Hockey Abstract website to see all the raw data, and read all of my articles.

My book, which covers hockey analytics and its mainstream applications and limitations, is available on Amazon (hard copy), or you can purchase the PDF from my website. If you find this topic interesting visit the book's page on Amazon where there's a "Look Inside" a couple of chapters, and some helpful book reviews. As you can see, it is not a team-by-team breakdown, but a book on how hockey analytics like these work.

Thanks for checking this out, and I hope there's something in the wide world of hockey analytics that's of interest and value to you. Contact me any time by email, vollman at hockey abstract dot com.