A Critique of the Nike 2014 Olympic Hockey Jerseys

Nike missed in a big way with the design of their hockey jerseys for the upcoming Olympics.

Share All sharing options for: A Critique of the Nike 2014 Olympic Hockey Jerseys

When Nike received the bid to do the Olympic jerseys, I was cautiously optimistic. I really liked the ones they did in 2010, and I was hoping to add a Team USA jersey to my collection this year.

Then the designs came out. My first reaction: Dear lord, Nike, what have you done?

These sweaters are so far off the mark both aesthetically and in regards to hockey culture that they have already horrified two nations and will likely scar others. Let's take a look at all the little ways Nike managed to completely mess these things up. 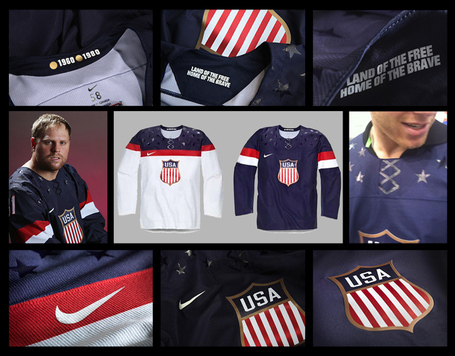 First up is Team USA. By far, the best parts about this jersey are the ones you can't see. The homage to the 1960 and 1980 gold medal teams and the "Land of the Free, Home of the Brave" inside the collar is classy and fitting. It feels very personal and is a quiet but strong reminder of the history of USA Hockey and nation it represents. The lettering would have been better in embroidery so it doesn't crack as the jersey ages, but it was a nice idea at least.

Then you move outside and everything falls apart.

The shield is one of the first things to catch your eye. Classy, right? It looks like it was going for a classic 1930's look. But that's not the first thing that comes to mind - it looks like a freakin' Union Pacific logo. It's also proportionally too small for the rest of the jersey. And, oh god, is that screen printing? When hockey fans have been trained for years that screen printing = awful jersey foul? Yes, yes it is.

Let's move on to the stripe on the away jersey. It's a strong graphic move that directs your eye directly to the player's armpit. During games, hockey players sweat, and the area of the armpit is usually drenched by the 3rd period. Yeah, Nike, nothing says logical design move like emphasizing sweaty pits! Even the darks do it to an extent.

The Nike logo placement also bugs the crap out of me. I know that's where they usually put it, but hockey fans have gotten used to seeing the brand in less conspicuous places. CCM put a nice little patch near the bottom back of the sweater, and Reebok put it above the name. After coming from that, Nike's swish on the front (especially when emphasized by the red background on the white jersey) is basically saying "HEY GUYS! Guess who got to design the Olympic jerseys? Yeah, that's right, WE DID! Now GO BUY MORE OF OUR STUFF!"

Even as bad as all of those elements are, the real sinker on the deal is the fake laces and stars. I'll discuss this more later because it's so heinous it really needs its own section. Instead, let's take a quick look at the other two jerseys they've unveiled so far. 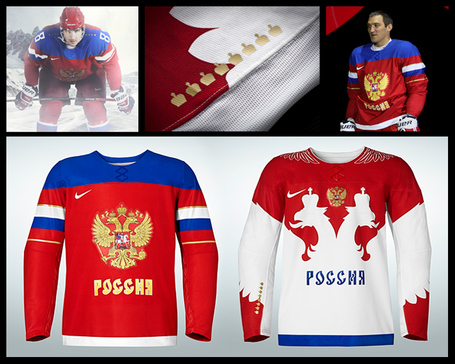 The red Russian jersey is actually fairly sharp, all things considered. There is minimal shiny star-age on the shoulders, and apart from the fake laces and likely screen-printed logo, it's not too bad. The white jersey goes with a Russian Seal theme and brings in white wings on the shoulders - not a terrible move if you're into that whole bird concept. The way the wings from the middle crest continue to the sleeves is pretty cool as well.

The one thing that bugs me about the Russian duds is on the right-hand sleeve of the white jersey. See those little crowns? They represent every gold Russia/USSR has won. They basically took the only good aspect of the USA design - the quiet reminder to the past - and showed it off instead. It's a bit more arrogant, and I'm not sure I like it. Luckily, it will probably be partially covered up by gloves when the sweater is actually worn.

Now, onto the real eyesore: 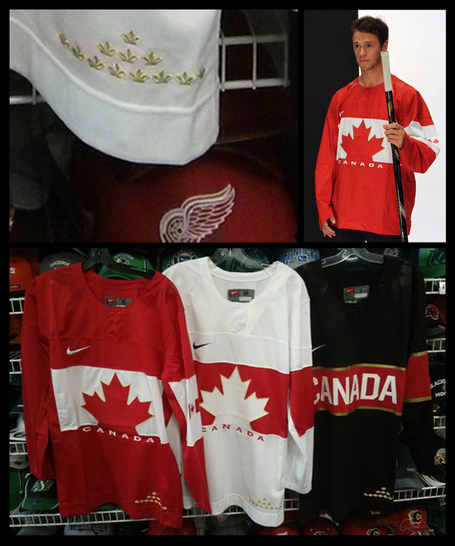 Oh Canada. There is a reason Disappointed Toews looks so very disappointed.

For one, the lack of symmetry is just silly. I like the logo a lot - the use of negative space is really nice, even if it does look like Petro Canada's logo - but dammit, why doesn't the stripe go all the way across? Does Nike think Canada has something against their right arms? Is there some reason why the jersey appears to be weighted to one side? I JUST DON'T UNDERSTAND!

Next issue - if the bottom image (leaked on Reddit by a store owner) is correct, Canada took Russia's open display of gold medals to a whole new dimension. This jersey is the visual equivalent of "HOW MANY CUPS HAVE YOU WON?!?!" Canada, you've become the red wings. Even the hat below you agrees. Add in the fact that the players will be comfortable with the whole no-tuck rule by the time February gets here and there will be no way to shield us from it.

And then there's the third jersey. WHY THE HECK does a team that will play approximately 10 games even need a third jersey in the first place? And not just any third jersey - a black third jersey, similar to about half the teams in the NHL. Plus, they went all out and made it look like a cigarette box. Didn't they get the memo that black uniforms result in more penalties against? And speaking of penalties.... 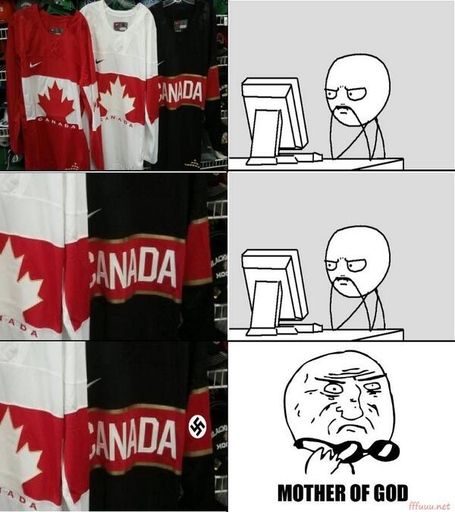 Aesthetics aren't the only reason these jerseys fail. They fail because they don't understand hockey culture at all.

Nike confused us with other sports. Football, basketball, and even soccer all seem to make a point to look modern and flashy. Shiny jerseys with lots of pizzazz, screen printing, and pop sell well because they represent the "cutting edge" and "in" culture those sports aim for. Individuality is embraced, and being loud and in-your-face even away from the field is encouraged.

Hockey is an entirely different animal. We are obsessed with history and team unity. Jerseys that represent these ideals - such as the ones for Original 6 teams - work for us. Whereas other sports' fans would laugh at old-timey designs, we cherish them and DEMAND they return if they're taken away (Zig-zag mountains, when?).

A look at some of the absolute worst jerseys the NHL shows a lot of printed designs. Almost every risk a team has taken with their jersey has failed. Why? Because we know what we like, and that's not it. Unless it's done perfectly, we're going to rip it apart, and some little shiny screen-printed stars on the shoulders AREN'T perfect by a long shot.

These Olympic jerseys tried to tap into historical ideas in updated ways, mainly with the iron-on laces. It was a nice idea, but in hockey, if we want laces, we want REAL laces, not some cheap imitation of them. Those fake zigzags don't stay true to the idealized "spirit of the game", the image of a group of friends in knit sweaters knocking pucks around on a frozen lake with wooden sticks, breath rising in clouds, and nothing but the sky above them. While the sport of hockey has evolved past that point, we still love reminders of our care-free past.

Nike missed because they didn't understand that. They tried to make these sweaters - and I hesitate to even use that term - look hip and modern when we just wanted something more classic. They didn't understand who they were marketing to, and as a result produced a set of gad-awful jerseys that probably won't sell very well at all.

Luckily, the Olympics will only last for 18 days. After that, these jerseys can fade mercifully into the background, brought up only when ugly hockey sweaters are discussed. Between the awful graphics and complete culture ignorance, there just isn't much to like.

Hopefully the 2018 duds won't make the same mistakes these did.