Hopefully the Kings blew their collective loads last night with all that scoring against the Rangers. It actually was a fun game, and the team seemed to be approaching the game like it was regular season. Jonathan Quick was balls to the walls as always.

The good news for the Avs is that he most likely won't be in net tonight. More good news is that brawler Jonathan Bernier was shipped out of town, so the Avs will be facing a back up new to the team. Unfortunately, LA has two guys fighting for that spot in Ben Scrivens and Matthieu Garon. Our boys may be stonewalled by a guy trying to make a name in LA.

Not on the ice last night was Dustin Brown, so it's probable Colorado will be facing potential dickhead douchebag cheap shots big hits.

The Avalanche roster hasn't been released, but the storyline is those last positions up for grabs. There are 27 guys here in Vegas, so four players are still on the cutting block, and Roy has already stated he will carry 13 forwards and 8 defenseman on opening night. Sami Aittokallio will obviously be headed back to the Monsters. Matt Hunwick, Nate Guenin, and Nick Holden are fighting for two of the blueline spots.  Brad Malone, Guillaume Desbiens and Marc-Andre Cliche are all in a battle for the lone forward opening.

The game will be broadcast live on the Altitude Radio Network, including on AM 950 in Denver and online at www.cruisinoldies950.com (U.S. only).

And in case you were wondering, lots of drinks were had last evening by AJ, Ashton, Michelle and me. There was a worrisome moment, though, when AJ forgot what those things attached to his wrists were. 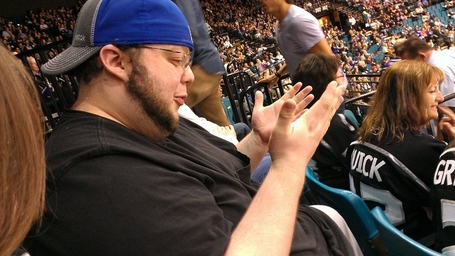