From the Monsters Desk: Gettin' Wild in Iowa!

Share All sharing options for: From the Monsters Desk: Gettin' Wild in Iowa!

The beloved Monsters [17-16-3] head to are already in Iowa to face the Wild [15-16-5] for a two game set this weekend. This will be the first ever meeting between the teams, although the Wild are sort of the Houston Aeros from last year.

It's been a grizzly week for the Monsters, losing many players while gaining just a few. Thanks to cathy's Tip-A-Monster update and other news, this is what we know:

Mark Olver, J.T. Wyman, Markus Lauridsen and Gabe Beaupre were all injured over the weekend, but no word on their status. Olver and Beaupre were at the TAM function for what it's worth.

Bryan Lerg went down hard on Saturday and from what we can surmise blew out his knee, although not the same one as last year. He is done for the year, get well soon Bryan.

Stefan Elliott and Michael Schumacher are also out with continuing injuries.

David Van der Gulik sustained a concussion while up with the Avs and remains out indefinitely.

To combat this heinous loss of healthy hockey players, on Saturday Lake Erie called up Vincent Arseneau, Mikeal Tam and Lee Moffie from the Cutthroats. Unfortunately, this wasn't nearly enough so Ray Kaunisto and Jace Coyle were signed to PTO contracts on Sunday.

Add to all this, Ryan Wilson was recalled to the Avs due to their injury situation. Karl Stollery was called up, played for LEM on Sunday, and recalled again this week. Sami Aittokallio was called up to be Varly's backup in Tuesday's game but has now been returned. Kent Patterson hung out in Cleveland for the week, but he's on his way back to Denver already because they don't have any goalies or something.

Until we hear otherwise, here is what the Monsters have to work with this weekend:

Yes, this looks pretty dire, but I wouldn't rule out a couple of the injured guys being ready to play. Unfortunately, I think Karl Stollery will be with the Avs at least until Guenin comes off the DL. Patrick told Moser last night that Sarich is looking at 2-3 weeks out of the lineup, so this could turn into an extended stay unless the Avs send him back and bring up a forward.

But enough with all the depressing stuff, the Monsters held their annual Tip-A-Monster night on Tuesday and by all accounts a good time was had by all. Our own cathyannhenry wrote up a great first hand account of the event in a fanpost. Also, check out the photos at the Lake Erie flickr page. 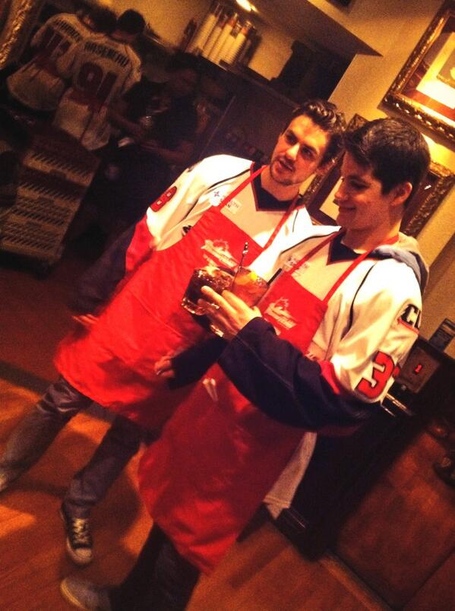 For even more fun, check out this weeks' Getting To Know feature with my fellow Nutmegger Lee Moffie and Miley Cyrus fan Dan Maggio.

Dennis Manoloff of the Plain Dealer managed to catch up with Ryan Wilson in the brief time he was in Cleveland for his very well done "Off The Ice" series. Usually this is a light "get to know" feature, but this week it was some pretty serious stuff, read it.

AHL standings - Monsters are still 3rd in the North, but now 9th in the WC, 5 points back of Rockford but with 5 games in hand

We all need a lil pick-me-up this week going into Iowa, PGT has us covered

Friday - "Blackened" from Metallica when they were good

Saturday - "Negasonic Teenage Warhead" from Monster Magnet, also from when they were good

I'll be here for Friday night's game for updates, tweets and whatnot, but Saturday's just ain't happenin'.

The boys have been pretty quiet lately, but Meursy came through this week with some more twitter gold.