Top Shelf and Anatomy of a Goal Crossover

What's better than having the number 1 and number 2 article series on the entire internet? Having both of them analyze the same goal!!!

Share All sharing options for: Top Shelf and Anatomy of a Goal Crossover

Welcome Ladies and Gentleman. This is the first ever, special edition, cross over between the highly regarded Anatomy of the Goal series and the undefeated Top Shelf series. A new Top Shelf article is currently in production, but in the mean time our beloved and relatively well regarded leader has requested Mike and I analyze the same play. We have chosen the Duchene's famous "Monkey Goal" from the Nashville game.

Two notes: 1) There is no poll on whose analysis is better, but clearly if there is a poll you better fucking vote for me. 2) As this is a special edition, there is very little (like 1% input from my brother). So, if anything is intelligent, that is my doing. All mistakes can be credited to his 1%. This will be posted via my account, instead of the usual Brothers Parkin account.

Look below and you'll see Duchene entering the zone on the power play after a pass from Johnson. Nashville is playing a 1-1-2. They are currently looking to push Duchene or any puck carrier to the boards and hoping to smother him at the blue line: 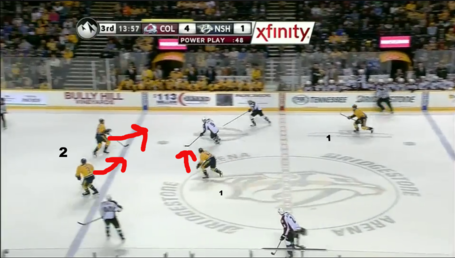 Now, Duchene has gone to the boards and been perfectly pinched by the Nashville defender. This was a little lower in the zone than I think Nashville wanted, but that seems to be due to Duchene's speed. Not only that, but the near side forward is in great position to take the puck away: 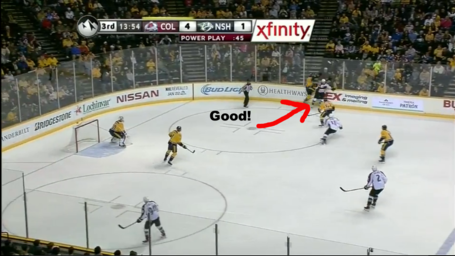 The puck was sent along the board all the way to Holden. You will see Nashville is in a perfectly organized, Gandalfian, defensive PK box. You'll see that it's a larger box that we might usually see, but there is no passing lanes through it to Duchene. As long as neither a puck nor a defender gets inside the box (boom, sex reference), Nashville is in control. However, the box is spread out which is a risky endeavor. There is more space than a small one. Also, where the fuck is Johnson? Anyway: 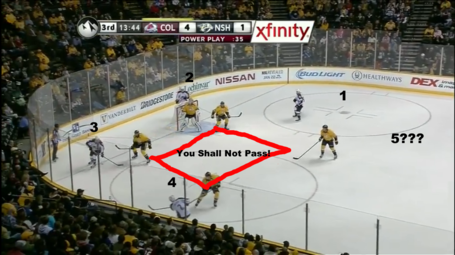 Now Holden and O'Reilly have moved the puck all the way around to Duchene. Nashville's box has adjusted extremely well, however McGinn has snuck inside. This is the beginning of the unraveling: 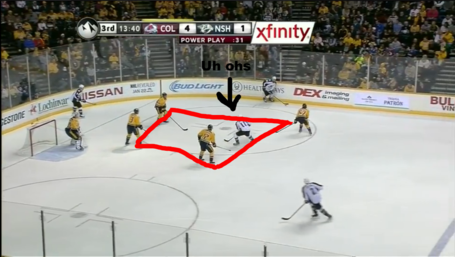 Once McGinn broke inside, everything went to hell. After some brief passing, Duchene gets the puck in the corner. The box begins to disintegrate. You can see the break down. Jones and Fisher are in good positions. Bourque has now let O'Reilly inside the box as well McGinn already being there. Who knows what Bartley is doing. He's chased Duchene into the corner to the point where he will never recover: 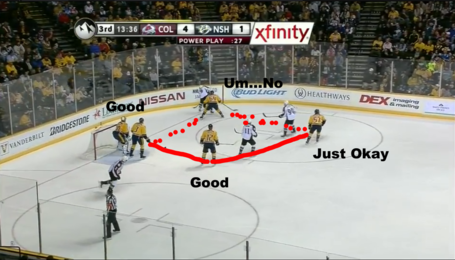 Now, Duchene made a very nice pass to O'Reilly through Bartley, who never should have been there. I reiterate this because one of the most important facets of a systematic box PK is never chasing a forward too far. Keeping the structure matters almost more than anything else. Bourque tries the always effective one handed poke check. Jones does his best O'Reilly impression (namaste) and Fisher needs to, um, pay attention: 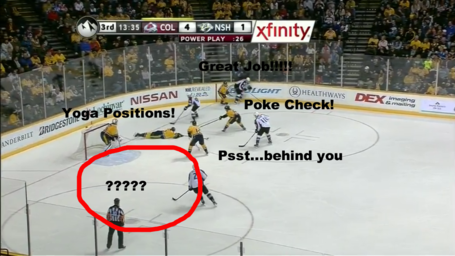 O'Reilly makes a slick move and actually passes through Dubnyk right to Holden. Fisher does try and stop it though, to his credit. Nashville's box has completely collapsed at this point. Just like that. Almost momentarily it seems. All of the Predators are below the hashmarks and now Jones (who, by the way, is the right side defenseman, meaning he should be on the other side of the net) is totally out of position. By 10 feet. Holden ends up getting a great shot but just misses wide.

Important safety tip. Bartley should be paying attention to that guy behind him: 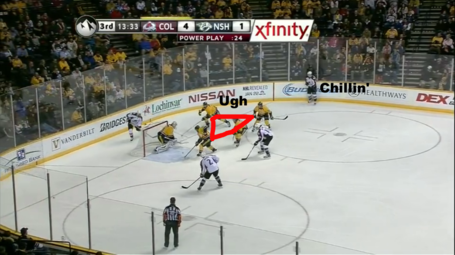 And Holden's shot goes all hypotenuse-y to Duchene. HERE ARE ALL OF THE POSITIONS WHERE DUCHENE COULD BE. Bartley and Bourque paid absolutely no attention to him. He could have been dry humping Barley (position "4") or he could be hanging out with Johnson (position "etc."). They had literally no idea where Duchene was. Once the box broke down, Nashville not only lost their ability to protect inside the box, but by trying to make up for that, they lost their positioning and ability to monitor the other Avs; Duchene being the most important: 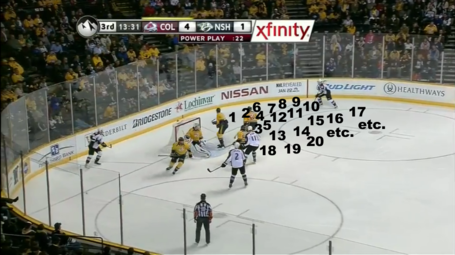 Now that Duchene has the puck, the rest is up to his skill. See those lines? Yeah, a PK should never be in lines like that. Jones and Bourque are both trying to block Duchene, who to Nashville's credit does make a bad percentage shot. Regardless, once the box broke down, all structure did as well. The end result, among other things, is double coverage like this and a box that more resembles, well, nothing: 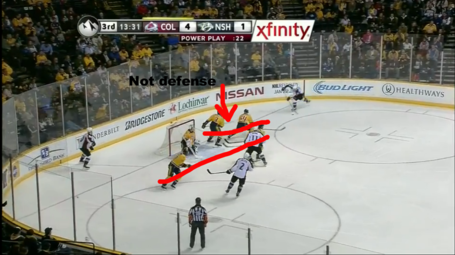 The result of the break down is thus: 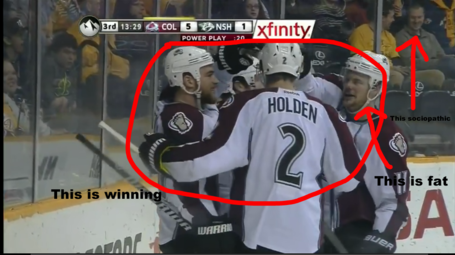 The breakdown resulted in what ended up being the game winning goal due to a great comeback by the Predators. The lesson here is what happens once the structure of a PK box breaks down. Once the Avs started moving and McGinn broke inside the box, Duchene was able to do a quick give and go with O'Reilly. This dragged the top corner of the box down low. Bartley then chases Duchene and at that point the box stressed too far, collapsed, and the Predators started scrambling. Once the scrambling occurred, the only hope the Predators had was a miss by Duchene, a nice save by Dubnyk (ha!) or a lucky bounce/clear by the Predators.

I hope you all enjoyed this and I hope you can see how the goal came about from a defensive breakdown perspective. Hopefully you can compare this to Mike's to get a full impression.