The NHL is rumored to be exploring outdoor game locations in Colorado for next year. Why should the Centennial State be selected, and which stadium makes the most sense?

It's Stadium Series season in the NHL right now. After the success of both the LA and New York games over the weekend, people are beginning to wonder about who the hosts might be next year. The rumor du jour is that the Avalanche might get their chance to shine, so, with that in mind, let's look at why Colorado should be selected to host and some of the venues the NHL might be exploring within the Centennial State.

NHL will reduce number of Stadium Series games in 2015; MIN, COL and MTL could be hosts http://t.co/CQBrNtjOAD

Why the NHL Should Choose Colorado

One of the biggest considerations is likely to be the team itself. Luckily, after 5 years near the bottom of the league, the Avalanche are back in a big way. Under head coach Patrick Roy, the young club has rocketed up the standings and look poised to make a deep run into the playoffs this year. Excitement is up all around Denver and will only increase as the team keeps winning. The Avs are a very marketable club with many electric up-and-coming stars such as Matt Duchene, Gabe Landeskog, and Nathan MacKinnon, not to mention the stars of yesteryear who have returned to resurrect the franchise in Joe Sakic, Adam Foote, and the aforementioned Patrick Roy. The team's uptempo style and scoring abilities would make for a fun game that will appeal to a wide TV audience as well.

However, let's be real - the biggest reason why Colorado should be chosen is Colorado itself. Picturesque mountains, wonderful snow, and 300+ days of sunshine a year would make it the ideal cold-weather venue choice. The magic of outdoor hockey would almost be secondary to the magic of the setting. The average temperatures for Denver in January and February hover right around 50F, so both the ice and the spectators could come away happy.

In addition, the rink could be used for other hockey events. College hockey is a major draw in Colorado, especially for the Denver Pioneers and Colorado College Tigers. The DU/CC game always sells out, so moving it outside and into a larger venue could help increase the NHL's revenues. Youth hockey has gained momentum in Denver since the arrival of the Avs in 1996, and many of the Avs alumni still live in the area. They too could make use of the rink and draw a crowd.

Given the current makeup of the Avs club, the hockey culture in Colorado, and most of all the setting, it makes sense for the NHL to award the Avalanche with an outdoor game next season. However, it's all dependent on venue. Which stadium nearby would be the most ideal location for a 2015 Stadium Series game? 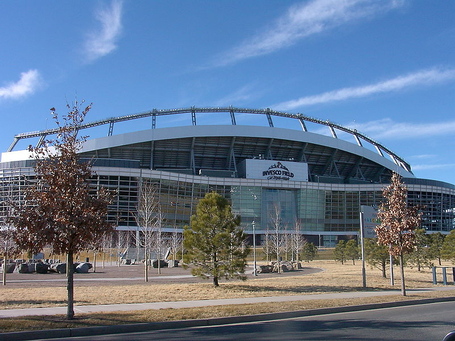 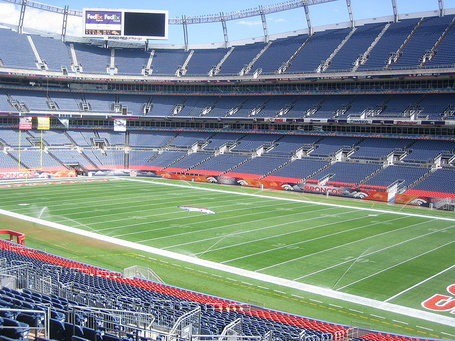 Pros: You can't get much closer than this. Sports Authority Field, often just referred to as "Mile High", is located right across I-25 from the Pepsi Center. It's right near the heart of Denver and would be an easy location to get in and out of. It's also the stadium with the largest capacity, which would probably appeal to the NHL. The arena offers a view of both the mountains and Downtown Denver while providing sight-lines more suitable for hockey than a baseball field.

Cons: There seems to be a football team in residence here that insists on playing on it until late January. Colorado is Broncos Country first and foremost, so any scheduling would have to take them into account. There also comes the question of whether or not Mile High could be sold out for a hockey game. This venue is much larger than any used this year, and rumor is that the NHL struggled to sell even those out. Are there 76,000 Coloradans who would pay to attend an outdoor game? 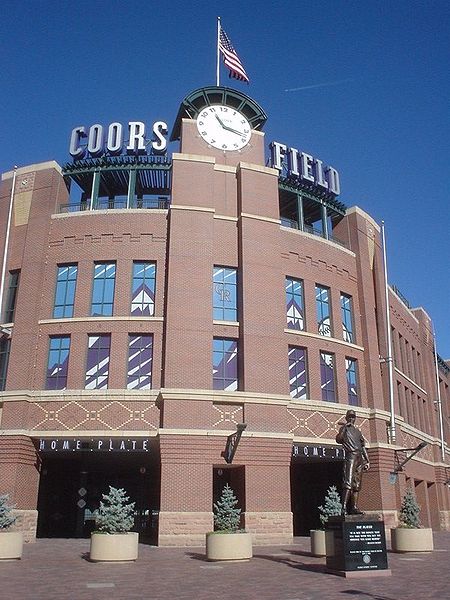 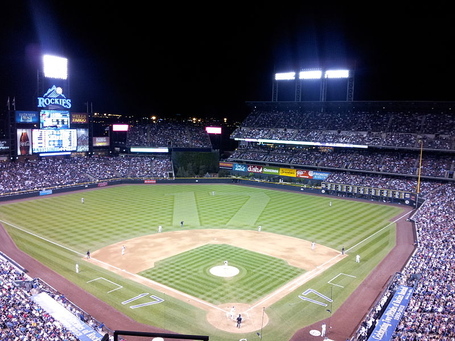 Pros: The capacity of Coors falls more in line with the venues the NHL used this year. The stadium is located in Downtown Denver as well, so it would still be an easy drive for ticket holders used to traveling to the Pepsi Center. Also, we would know for sure that the Rockies wouldn't be using the field since the baseball season doesn't extend into January/February. Furthermore, since this year's Stadium Series was sponsored by Coors Light, a 2015 Coors Light Stadium Series game at Coors Field could make a lot of sense.

Cons: The sight lines for baseball fields don't typically lend themselves well to outdoor hockey games. The position of the rink would be far away from many of the seats. Coors would work, but a football field might provide a more enjoyable hockey viewing experience. 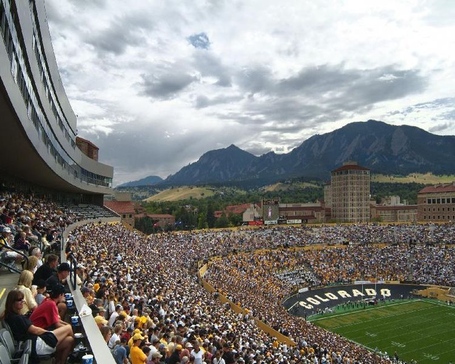 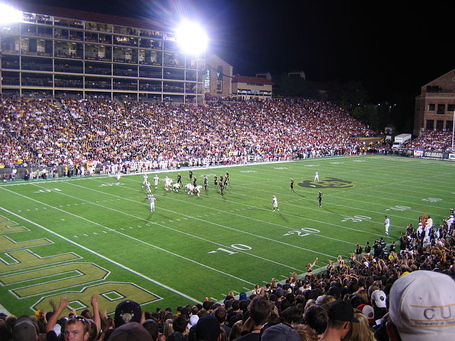 Location: Boulder, 30 miles outside of Denver

Pros: Just look at that view! Boulder is located directly within the Colorado mountains. While the other venues would have decent views out, Folsom would be a spectacle that would add to the overall outdoor hockey game experience. The capacity is also in line with the ones this year, so it has a better chance of selling out.

Cons: The field isn't located in Denver, so both traffic and commute time have to be taken into account. Will fans still be willing to go if it's more out of the way? This is also a college field for the University of Colorado, so all scheduling would have to be taken up with them. 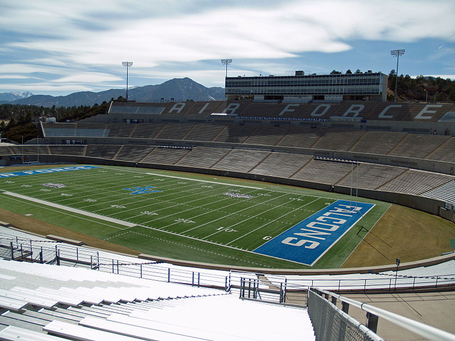 Pros: Just like Folsom, Falcon Stadium has a great view of the mountains, including the famous Pikes Peak. It's located just north of Colorado Springs along I-25, so it would be an easy draw for both of Colorado's largest metro areas. The stadium would lend itself very well to the Denver Pioneers / Colorado College Tigers game and allow CC to be the home team. The Air Force Academy hockey team could make use of the rink as well. Military tie-ins would also be very possible, including jet flyovers and other events to honor veterans.

Cons: First of all, it's located on the Air Force Academy, an active military base. Security is tight, and while they're used to hosting large events like football games, it could still prove to be a hassle. The elevation of Colorado Springs (6035 ft) is also a little bit higher than both Denver (5280 ft) and Boulder (5430 ft), which could prove more difficult for low elevation visitors. The venue is not in Denver, which might affect attendance. It's also a smaller stadium than even the ones used this year, so the NHL might opt for a larger setting.

I think Folsom is the way to go. It would be a magical experience with pretty good sight lines for the game, but even better ones out. While traffic might prove to be an issue, the overall ambiance would be an easy sell and attract a large number of viewers. It's also more in line with the capacity of the Stadium Series this year than a venue like Mile High.

However, if the NHL is indeed cutting down on the number of outdoor games next year, then perhaps the larger capacity of Mile High could be a bonus. If marketed correctly, I think Colorado could still sell it out, although it would be a bigger stretch than Folsom.

If those venues aren't feasible, then Coors is probably the next bet. It's location in Denver and fact that it's not on a military base gives it the edge over Falcon Stadium. The only way Falcon Stadium would be the most attractive location is if the military connection is marketed, but I have a feeling that the NHL will choose to play up the mountain scenery over anything else.

So, what do you think? If Colorado is awarded a Stadium Series game, which stadium should it be played at?