From the Monsters Desk: The Streak Ends

Share All sharing options for: From the Monsters Desk: The Streak Ends

Our beloved Monsters [18-20-4] take on the Charlotte Checkers [21-19-1] twice this weekend at home. First meeting of the season for these two teams who are 11th and 12th in the Western Conference standings.

Last weekend's games were crucial to the Monsters' playoff hopes this season. Another 3 losses would put them out of any rational contention this year, and likely kill what was left of their confidence.

Saturday's 6-2 loss to Hamilton was truly horrible, but cathartic. Five Monsters (including Matt Hunwick, and no, I haven't found a video yet) racked up seven fighting majors, resembling Slapshot! more than a real hockey game. While it was gruesome to behold, it might have been necessary to evacuate all the negative energy accumulated in the last 3 weeks. Recap here.

The most daunting prospect of the weekend was facing division leading Toronto in Toronto less than 24 hours later. Gil Desbiens was suspended and Sgarbossa was out with an LBI, but LEM came out fast and scored 2 goals early. The Marlies clawed back to a tie in regulation and ended up winning in a shootout. The pointless streak was broken and even in a loss the play was much better than it had been in the previous 8 games. Recap here.

Even though Utica has spent the entire season in the WC cellar, they always seem to give the Monsters fits. Lake Erie, and especially Paul Carey, looked fantastic in the offensive zone but were lacking in defensive play for the first 2 periods, gaining a goal from Mark Olver but down 2-1. Desbiens scored on a lucky shot to tie it in the 3rd and we went to another skills comp. Colin Smith and Joey Hishon scored and Pickard shut down the Comets shooters and we saw our first win since the beginning of the month. Recap here.

The weekend was encouraging if not pretty. A flicker of confidence, just the barest hint of defensive responsibilty, and hard work resulting in 3 desperately needed points. Things to build on going forward.

In this week's personnel moves, Sami Aittokallio was returned to LE before the Comets game, Kent Patterson was sent back to the Cutthroats on Thursday.

After a long absence, we believe that Duncan Siemens will be in the lineup this weekend. Also, J.T. Wyman is back practicing with the team (look to the far left in photo below) and would be very nice to have playing again. 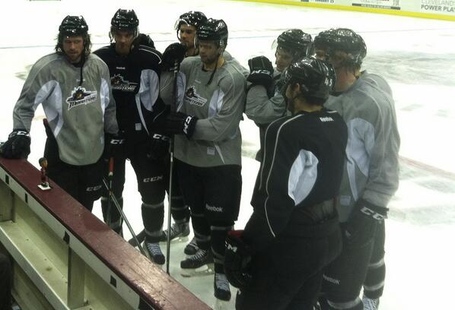 LATE EDIT: Vincent Arseneau and Mikael Tam have been sent back to the Cutthroats, indicating that a forward (probably Wyman, maybe DJ Dessy) and a defenseman (almost assuredly Siemens) are ready to come off the injury report. Yessss!

Speaking to J.T. Wyman, he and Dexter look-a-like Brad Malone are our guests this week in Getting to Know...

Dennis Manoloff of the Cleveland Plain Dealer continues his Off the Ice series this week with defenseman Mikael Tam, some good stuff about playing for Coach Roy in Juniors here.

Good news! Lake Erie rockets up two spots to 28th in this weeks AHL Power Rankings from the Hockey Writers.

Bad news! Looks like the Monsters have to face Conn Smythe winner Cam Ward in goal for the Checkers this weekend. What a bunch of crap.

AHL Standings - Monsters 4th in the North, 12th in the WC, 6 points out of a playoff spot

We're going a bit out of the box this week with PGT, since Charlotte is pretty red. So, let's go rustic.

Friday - Junior Brown with "Highway Patrol" the only country song I like, true story.

I'll be watching Fri & Sat nights and giving updates both here and on twitter. Neither game conflicts with the Avs so drop by if the mood strikes.