With only two more games left, both of which are exhibition-style, the Avs cut the roster to the key people.

Share All sharing options for: Avs trim the roster again, send 9 guys down

The Avalanche have reassigned 9 players to their respective clubs:

I'm surprised and disappointed that Duncan Siemens didn't get more playing time, but I'm not going to lament it further. I really wish I knew what the hell Roy's thought process is on this.

Notable players still on the roster include Andrew Agozzino, Jesse Winchester, both of whom have been playing brilliantly all camp long. Borna Rendulic is also still with the club; he's got great hands and vision, but really needs to adjust to the North American game.

Ben Street's appearance on the refined roster is baffling. He's been less than stellar, to put it nicely. Another player who's been questionable—sometimes good, sometimes crappy—but has made the cut is Dennis Everberg. 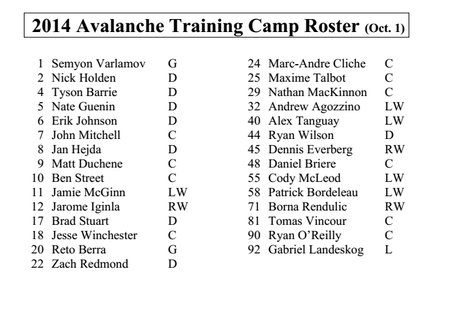