The arbitrary nature of the organization that is supposed to protect players proves, once again, the system is faulty.

The NHL announced on Monday that Erik Johnson would be receiving a phone hearing for his slash on New York Islanders forward Frans Nielsen Saturday night. The slash was blatant and deserved the penalty. One could argue that it also deserves at least a fine, if not a one-game suspension. However, it's difficult to accept that a hearing has even been scheduled when another blatant—and far more dangerous—move has gone completely unnoticed by all in the hockey community except Avalanche fans, players and media.

During a game against the Philadelphia Flyers on Thursday, February 6, Scott Hartnell committed one of the most malicious acts a hockey player can: an intentional knee-on-knee hit. From the moment Hartnell lined up rookie star Nathan MacKinnon, there was little doubt about his intention. He targeted MacKinnon as soon as the forward took control of the puck, purposefully angled his body for the knee and swept the leg.

Here's the video of it in slow motion (apologies for the quality):

We can use screen shots to break it down even further (click on the pictures for a larger view). In the first slide, we see the beginning of the action where MacKinnon corrals the puck onto his stick. You'll notice that Hartnell's sight line is directed toward the area from which the puck just exited. 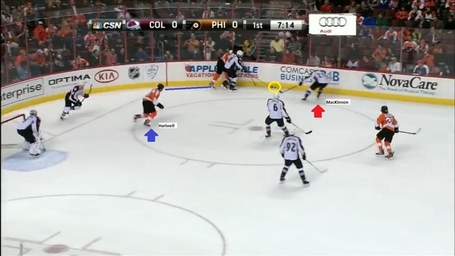 Here, Hartnell realizes MacKinnon has the puck, and he pushes to close the gap quickly. Still, all seems okay. 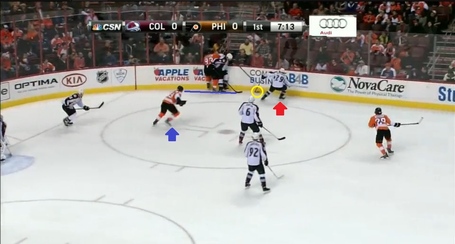 However, cutting off one of the fastest skaters in the league is challenging, and Hartnell has to know he won't reach MacKinnon fast enough to play the puck. At this point, it's clear he is going for the hit. Given that he can see nothing but numbers, however, hitting MacKinnon would be reckless and illegal. 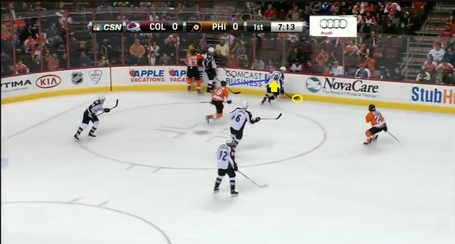 Yet it appears that is what Hartnell intends to do. Notice the elbow and body position. 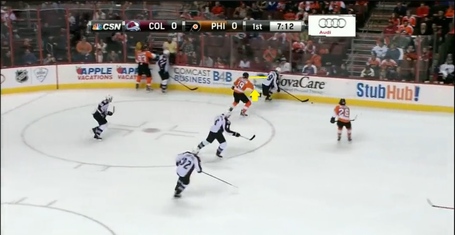 This is where the intent seems to change. As Hartnell closes in on MacKinnon, you can see his knee coming out in an angle that is not akin to skating or hitting. Hartnell's body is also not angled for a hit and his arm is in a neutral position. 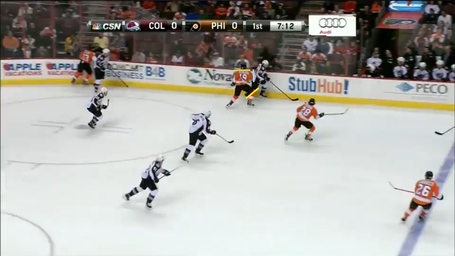 And it gets worse. Notice the space between MacKinnon and Hartnell. There is no effort to play the body here. There is only an extension of the knee, attempting to break up the stride. 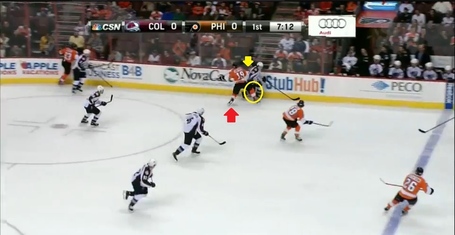 As he falls to the ice, Hartnell sweeps the leg, knee to knee. 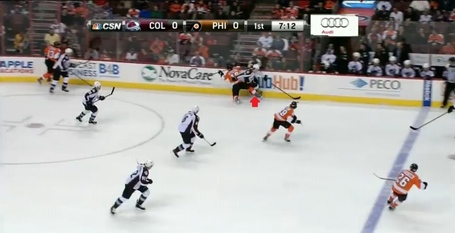 Fortunately, MacKinnon is quick enough to avoid the worst part of the hit. And there's the rub. Because the player was able to avoid injury, no disciplinary action was pursued. This was a vicious attempt at hurting another player, yet no hearing was even scheduled. Hartnell got two minutes of down time.

In contrast, Frans Nielsen spent time with the trainers on the bench after Johnson slashed his wrist. There's no denying that what Johnson did was wrong. It was an intentional slash, two-handed baseball style. But it's the injury that made the difference as it's well known that the Department of Player Safety punishes based on injury, not intent.

It's frustrating because there was no more intent to injure on that play than there was on the Hartnell play. In fact, while Hartnell had plenty of time to think about what he was doing, Johnson's crime was one done in the moment. While that does not excuse Johnson's behavior, it should in no way be treated as more malicious and more deserving of punishment beyond the two minutes than the knee-on-knee hit MacKinnon received.

Yet here we are. Johnson is getting a phone hearing. Hartnel got nothing. This isn't the first time this season in which an Avalanche player has been judged more harshly for a lesser crime. Recall that Cody McLeod lost five games earlier in the season for a hit on Niklas Kronwall. Again, the Avalanche player was guilty, but the hit was nowhere near as bad as others around that time that received the same or fewer games in suspension. However, Kronwall suffered a significant injury, further illustrating the injury-equals-discipline mindset.

This isn't a situation unique to the Avalanche. It's a wide-spread problem that needs to be fixed. If players are going to take the suspensions seriously, there must be rhyme and reason to them. Currently, there is neither.

While this is a thankless job, it's one that can be done better. The first step is to replace Brendan Shanahan. He has he proven that he is incapable of delivering even-handed justice, and though it's an extensive decision-making process, Shanahan is the final authority. He's not getting the job done. Currently, Shanahan has two roles in the NHL: the director of player safety and Vice President of Hockey and Business Development. Having to divide his time is problematic and could be partially to blame for the problems in the department. Staying too long in the position also causes issues as one can become less persistent with overexposure. Both of these things could be remedied by replacing Shanahan.

It remains to be seen if Johnson will receive any additional disciplinary action. Based on its track record this year, it wouldn't be the least bit surprising to see the league give him a three-game suspension. Meanwhile, Scott Hartnell is free to continue his questionable approach to hockey, putting more careers at risk with his reckless—yet apparently quite legal—play.