Share All sharing options for: From the Monsters Desk: Hey! We're still playing!

The beloved Monsters [20-23-4] are on the road in beautiful Oklahoma City this weekend to hang with SteveHouse and the @MHH's and also to play 2 vs the Barons [21-22-6]. Last week the Monsters beat World Champion Grand Rapids and dropped a couple to San Antonio in a truly frustrating lack of consistency.

The Monsters play against San Antonio was mediocre at times and generally poor otherwise. They were outshot 67-44 on the weekend and could do absolutely nothing to stifle the Rampage's speed through the neutral zone. Friday night saw a 4-1 loss with Mitch Heard picking up the lone goal. Recap here. Saturday was slightly better, with an encouraging 2nd period that saw a lovely goal by Sgarbossa from Meursy, but the result was a similar 3-1 defeat. Recap here.

Injury update: Matt Hunwick and Joey Hishon found themselves back in the lineup for LEM in Friday's game. Hish's return was short-lived as he wasn't effective on Friday and was back on the LBI crew Saturday.

Lake Erie has called up another Cutthroat:

Soudek has 13G/3A (3 assists out of 16pts? Wtf?) in 31 games for Denver this year, and is making his Monsters/AHL debut. He was invited to LEM training camp before the season.

Brett Clark has played 25 games for Lake Erie this year so his PTO contract is up. He's still on the roster as of now so he either signed another PTO or has been offered a Standard Player Contract. 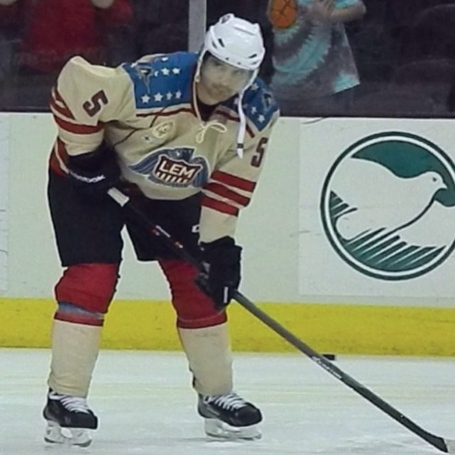 This week's Getting to Know... feature from the LEM crew includes Nords fan Gil Desbiens and The Moose.

Retaining Brett Clark, if that indeed has happened, is a positive move personnel-wise. I've never seen Soudek play, so the the jury is still out on that one. By the numbers, it looks like he can score, but can't set anyone up, and bring the usual grit and hunger that guys from the lower leagues have when they get a shot in the A.

Right now the Monsters are struggling to possess and shoot the puck in the offensive zone and aren't executing any kind of neutral zone strategy that can delay or foil the opponent's offensive zone entry. Losing Vandy, Lerg and Hishon hurts in various important ways and LEM hasn't found the formula to make up for that at this point. Honestly, I don't know if they can with the roster as it is. With the trading deadline coming up, it would be nice to see a few moves to excise some of the lame-duck contracts and general dead weight for better or at least different players.

AHL standings - Monsters now 4th in the North Division and 14th in the Western Conference, 8 points out of the last playoff spot

Today's edition of Pre-game Tunes features some stout bluesy altrock from the 80's. This had better work...

Saturday - "Dark Night" from The Blasters

I'll be here for all the OKC mayhem on twitter and in this thread. Supplement your Avalanche down time with some fine AHL hockey from your Lake Erie Monsters!

Made it to Cox Convention Center in #OKC. @monstershockey practicing shortly pic.twitter.com/OMujfMxpdX