From the Monsters Desk: The Case of Dean Chynoweth

Share All sharing options for: From the Monsters Desk: The Case of Dean Chynoweth

The beloved Monsters [21-24-4] return home to Cleveland this weekend for a 2 game series with the Iowa Wild [21-19-10]. Lake Erie's trip to Iowa last month was smack in the middle of the January 8-game slide and the Wild prevailed in both games 6-1, 1-love.

LEM now sit dead last in the Western Conference, 11 points out of a playoff spot with 27 games left to play. If they have any hope of post-season hockey, they need to win at least 18 games between now and mid-April. It can be done, the Monsters have games against all but one of the 7 teams they would need to pass to eke into the AHL playoffs, but the winning needs to start now, and given the fact they haven't won as many as 3 games in a row all season it looks pretty bleak.

Which brings us to the Case of Dean Chynoweth and the effectiveness of he and the LEM staff. I see a lot of comments both here and elsewhere calling for Coach C to be fired and the Avs to install another one of Roy's contemporaries from the QMJHL so Lake Erie can take off and be all it can be. Last year, Coach C led a similar but more experienced team to a 35-31-10 record, good for 11th in the WC. This year will probably fall short of that by a few wins with very little veteran leadership and a lineup that rarely looks the same from one game to the next.

So, how much of this is on the staff and how much of this is on the players? J.T Wyman is the top vet in games played with 39 out of 49. The AHL allows 5 vets to dress for each game, the Monsters average less than 4 vets dressed per game. On any given night, LEM have 15 guys on ELCs/AHL deals/PTOs making for one of the most, if not the most inexperienced team in the league.

Whether or not Dean Chynoweth is getting the most out of the Monsters players and developing the youngsters the best way possible is a good topic for debate and there's no way to prove one way or another if he is or not. I tend to think any coach would have a fairly similar record given this roster and injuries so far. My conclusion is that the poor record is more of a reflection on the personnel department, both now and in the past, than anything else. Anyone who thinks there is top level talent being frittered away in Cleveland by Chynoweth's incompetence is fooling themselves. As far as Coach C keeping his job, it might be better to start fresh with someone else next season, but if the roster looks the same the results won't be much different.

Next week, I'll take a look at why the Monsters are built to fail, what LEM might look like next year, and some changes that could be made presently to make next year's team more successful.

This past weekend the Monsters headed to Oklahoma City to play 2 against the Barons. Friday's heartbreaking loss came on a PPG with 20 seconds left on a penalty that never should have been called. Recap here. Saturday's game was also pretty even, despite the fact the Monsters played terribly and did everything that usually ends them up in the loss column, so even it went all the way to a shootout. Stefan Elliott won it for LE on a sick wrister. Recap here, also check out our man on the scene SteveHouse's take here.

No major news on the injury front this week, although DJ Dessy (Gabe Desjardins) tweeted that he began skating Friday after a long bout with LBI. He's a possibility to return for this weekend or next. Hish, Moose and Schumi are still out with their issues, Vandy remains sidelined on the Avs roster with head trauma and Captain Lerg is out for the season.

Cam Reid was sent back to the Cutthroats this week, making DJ Dessy's return seem imminent. Reid played well when he was in the lineup, I wouldn't mind seeing the Monsters offer him an AHL deal for next year.

Dennis Manoloff of the Cleveland Plain Dealer continues his excellent "Off the Ice" column this week with our bud Duncan Siemens. Don't miss this one if you like Mooses.

The Monsters fall a spot to 27th in this week's AHL Power Rankings from The Hockey Writers.

Friday night's game is Neon Night! Get stoked with these righteous sweaters which of course will be auctioned off after the game. 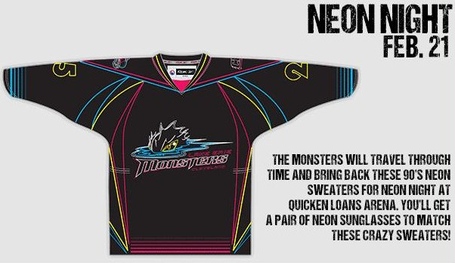 Friday - "Sinking" by The Cure

No Avs games this weekend of course, so feel free join in for the thrills and chills of Lake Erie Monsters hockey. If not, you can find updates and recaps here and on twitter throughout the series vs Iowa.

Good to see the lads taking in some Olympics this week. Meursy during the CAN/LAT game Wednesday:

And Picks giving support to the Canadian Women's Curling Team in the Gold Meal Match: