Tuesday Trends: A snapshot of the March 11 playoff picture

Minor shuffling in the also-rans and there's a new sheriff in town as we check in on the Western standings.

Share All sharing options for: Tuesday Trends: A snapshot of the March 11 playoff picture

Here's where we are this week (standings current going into Tuesday):

Here's your range graph. Click to embiggen, as usual. Also I changed the colors some: 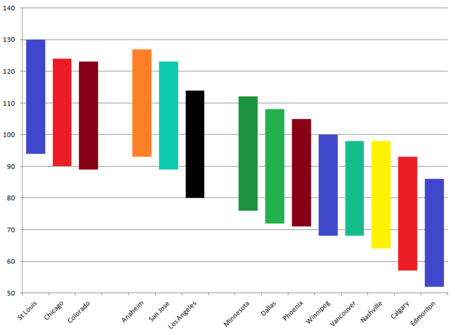 And the awesome moving version, courtesy of Pyotr. Click to hit 88mph (he puts the Pacific in front for some reason):

The playoff pace is currently Dallas's 92.3. Phoenix are right there, but Dallas does have a game in hand since they were postponed last night after the Rich Peverley situation. Vancouver dropped down to nearly 10 points off the pace with last night's utter third period collapse.

Perhaps most relevantly, the St. Louis Blues have taken over the pace for tops in the Western Conference, and Colorado are now a single point behind Chicago for home ice in the first round.

It's getting tough to imagine a situation where the Avs don't face Chicago in the first round. Maybe that's deceptive, since Chicago and Colorado are only 4 and 5 points back, respectively, without a big games played difference.