The Pacific is getting interesting as we come down to the end.

The following standings are current through Wednesday night's games, except Vancouver-Nashville, because who the fuck cares about their 0-0 after 2 game on the West coast.

Colorado took a brief lead this week over Chicago, aaaand it's gone, as they managed 3 points out of 6 on their Canadian road trip while the Blackhawks beat St. Louis. There's a new 8 seed too: Hello Phoenix Coyotes. And you know what else, Los Angeles needs to be saying the same thing, because they're trending downward, and the Coyotes are not far behind. Meanwhile Anaheim has seen what once was a commanding lead over everybody fall PDOver a cliff to find them now tied with the Sharks. Yikes Ducks!

Here's the range graph. Click to enhugeify. Also I changed the colors some again because screenshotting into Paint just makes you re-make all your custom colors and I made the most Yao Ming face ever at getting those exactly the same. 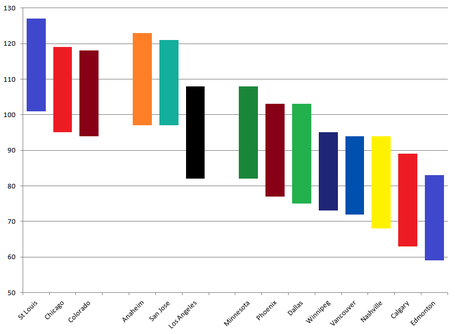 The playoff pace is now Phoenix's 91.5. Dallas are still very close, unfortunately. There's a very clear tiering of teams here in the West, with the top 5 having sure shots, the next tier (LA, MIN) also feeling good, the third tier (DAL, PHX) fighting and clawing, and everybody else reading the draft boards and hitting the driving range.

Are you guys like me, do you want to see the Chicago series? If not, who would you rather?