This is current through Monday night's games. Edmonton can now only muster 79 points, and as such, their quest for the 2014 Stanley Cup has officially ended. They will no longer profane your Tuesday mornings.

Two teams actually have a higher projected pace than the team directly above them. However this is due to games in hand, and those are not called points in hand. So say hello to your new Pacific division leading San Jose Sharks.

Phoenix still hold the final slot despite the playoffs pace actually being Dallas's 91.2. Dallas hold a game in hand for now. Also, Los Angeles has turned their fortunes in the last week and now make the sixth (!) Western team to average a 100-point pace.

Once again, Vancouver aren't as close as they look. They are 3 points back of a team with 2 games in hand. It's not out of sight for them, but realistically, no playoffs for you.

Range chart for this week, which you can click to gigantify, as is tradition. 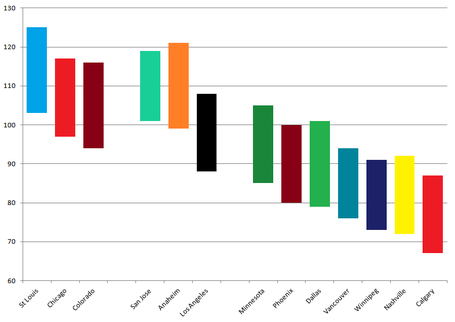 The Ducks and Kings would be a fucking bloodbath you guys. Also, I trust San Jose to eliminate the Adjectives more than I do the Ducks right now, so, this setup works for me. You?