Is it possible to look at how NHL teams acquire players (via draft, trade, UFA, undrafted free agent, and waivers) and gauge where they'll finish at the end of the year?

As the trade deadline draws near, I've been finding myself wondering more and more about how NHL teams are built. You hear quite a bit about draft-based teams like Pittsburgh, Chicago, Colorado, and Edmonton, but there are also other ways to construct a club.

So, are there NHL teams built around trades or UFAs, and if so, how successful are they? Is there a reason why teams like PIT, CHI, and COL have excelled this year while EDM is still stuck in the basement? Can you look at how a team is built and determine if it will be good or not? Is there some magic player acquisition recipe for winning the Stanley Cup?

I knew I wouldn't be able to gather a large enough sample size to prove anything, but I still decided to look at how this year's teams were built and compare them to all eight post-lockout Stanley Cup winners. I didn't know exactly what I was looking for, but after two weeks poking at the data, I did at least find some interesting connections.

These stats are current as of Sunday morning, so they do not include the Sunday or Monday night games.

Since I was looking at the impact of players on a team's record, I wanted to make sure that each player had participated in enough games to be a significant contributor. I decided to set the cutoff point at 50% of games played, or roughly 30 games for 2014 and 12 for the playoffs. This gave me right around 18 skaters and a starting goalie for each team. I ended up with 562 players in the 2014 side of the study, and an additional 149 in the playoff side.

From there, I had to manually find out how players were acquired. My sources were mostly Wikipedia, NHL.com, Hockey Reference, and The Hockey News, and after a bit of research, I settled on five player acquisition categories: Draft, Trade, Unrestricted Free Agent (UFA), Undrafted Free Agent (Undrafted), and Waivers. Every player fit into one of these categories.

You'll also notice that these aren't necessarily complete or up-to-date rosters. Certain players that have been traded - such as Michael Del Zotto or Devin Dubynk - still appear with their old club since they played over the 30 game mark while they were there. There are also a few injury-driven notable exceptions, such as Tampa Bay's Steven Stamkos.

If you're interested in exploring the data further, here are some appendixes I've set up with the bulk of my charts and graphs. I'll be dissecting the info more in subsequent posts (particularly when it comes to draft picks), but there's probably more conclusions here than one person could ever possibly hope to find on their own. If anyone else would like a more in-depth view at the data, these should help.

Appendix B: 2014 NHL Individual Stats (I had to switch to google docs because it was too big for SBNation to handle)

Going into this project, I knew that I wanted to find how teams were built, but what exact criteria does that imply? Should I look at a simple count of players, or is it more about total points? Or perhaps it's just a team's top scorers that really set the identity of the franchise?

I decided to test all three methods and average them at the end to draw my conclusion. My analysis will be based on by dividing the teams into the categories of:

before calling out other key observations and oddities in the data sets. Hopefully, this research will help show a correlation between how a team is constructed and where it sits in the standings.

A little NHL background is helpful first. No matter what anyone tells you, this is a draft-based league. 38% of the players I looked at are still currently with the clubs that first called their names from the podium. Trades are close behind - 31% of the league has been dealt at least once. UFAs account for 21%, and undrafted FAs and waiver pickups comprise 6% and 4%, respectively.

Of the 150 Top 5 scorers for each team, over half of them are draft picks. Around 1/3 were acquired in a trade, and 14% were signed on the free market. 8 undrafted players made the cut (3%), but no waiver pickup did. It's pretty common logic that the best players tend to be drafted and then aren't traded, and these numbers seem to back up that claim.

The first analysis of team construction I looked at was a simple count. How many of each kind of player is on the roster?

This next set looks at how reliant teams are on groups of players for points. Is it different than their largest group from the last graph?

Teams that switched categories I italicized. Some other thoughts:

Finally, I wanted to get an idea of what kind of players were the "go-to" guys night after night. I analyzed the top 1, 3, 5 and 10 scorers on a team, and decided that the top five was the most representational measurement. The NHL average for this group is 44pts in 60GP, so these are usually first and second line players that have a direct impact on a large number of games.

Again, here's a breakdown by team: 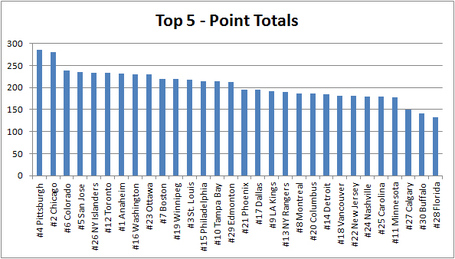 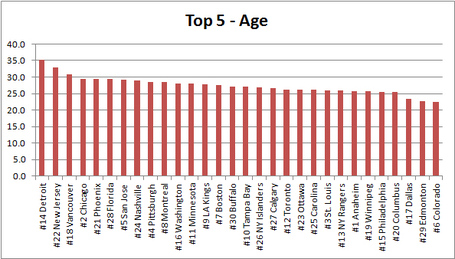 you find out that Colorado has the youngest group in the entire league, but they're still third overall in scoring. THIRD. Only teams lead by Crosby and Toews have more points than a group of youngsters that for the most part haven't even reached their prime yet. The fact that they're scoring this much this young means that they could be absolutely deadly in the next few years.
If you're looking for a reason why we shouldn't trade Stastny and O'Reilly, that would be a good one.

At least on the first pass, it looks as if teams that focus on the draft but also take care of trading seem to do the best. Free agency also doesn't seem to be the get-rich-quick scheme it's often portrayed as. Teams basing large parts of their future on free-agents don't seem to do as well either.

The set of strongly drafted clubs surprised me, as did the sheer number draft teams in general. I knew that the draft was important to many teams, but that's still quite the list.