More mix-ups in the battles for home ice and top 2.

Share All sharing options for: Tuesday Trends: No Foolin'

This is current through Monday night's games. Calgary can no longer best Phoenix's current 84 points, and so enjoy your Tuesday mornings free of Brian Burke's, eh, whatever that is on his head. He looks like a damn bond villain and it's AWESOME.

Colorado can CLINCH home ice advantage in the first round with 12 more points REGARDLESS of what Chicago does. That's not far off their season's pace.

Meanwhile in the Pacific, Anaheim retakes its spot atop the board as the games in hand have finally caught up to San Jose, Los Angeles doesn't need to fear Phoenix anymore, and hahahahahahahaha Canada. Mark your calendars for Dallas vs Phoenix the last game of the season. That could very very easily be a play-in game.

The week's range chart, which hugens as always if you click it. 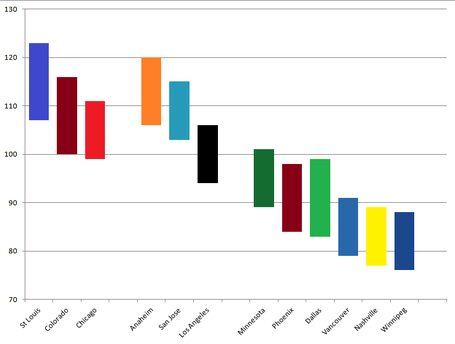 That gives, barring hilarity, St. Louis either Chicago or Colorado in the second round, and Anaheim either San Jose or Los Angeles. Even if the wild card is outside your division, as you know if you read yesterday's Cupcakes, the playoffs do not reseed anymore, so Phoenix for the bracket's purposes would be adopted into the Central here. And I would root hard for them in order to avoid the Bloos.

I cannot root hard for Dallas. Please, Phoenix, edge them out...