From the Monsters Desk: Home. Finally.

Share All sharing options for: From the Monsters Desk: Home. Finally.

The beloved Monsters have completed the Wild West Road Trip from Hell and honestly it could have gone a bit better. In seven games, there was one win, a couple of (really) blown leads late that turned into shootout losses and bunch of other crap. 4 points in all.

Other than all that, what else happened?

"The big story last night was off the ice. In Saturday’s game, Andrew Agozzino mouthed off to the ref about something and received a 2-minute Unsportsmanlike Conduct penalty late in the second period. 8 seconds later the Ramps scored. 5 minutes into the 3rd period, Mike Sgarbossa took a Cross-checking penalty, also mouthed off to the ref and received an extra 2 for Unsportsmanlike. The Monsters killed off the first one, but 40 seconds into the extra SA scored to put the game away. I can see how situations like this drive a coach nuts, bad decisions by 2 players essentially taking the team out of the game.

What is really unfortunate is the way that Coach C chose to deal with the issue. He benched both guys for Sunday’s game. We are all aware of Sgarbossa’s red-zone temper and there were the rumors last year that his injury at the end of the season was really a long-term benching for attitude problems, whether that’s true or not we’ll probably never know, but he definitely was scratched for disciplinary reasons last night. Aggz is a different case. He’s a leader on the team, even wearing the alternate captain’s letter on occasion this year, and consistently praised for his hard work both on and off the ice. Not only that, he was one of only 2 players to play every game last year, and along with Smitty had played every game this year. 145 straight games, and now he gets benched for a momentary lapse of judgment at the end of a massively frustrating season.

(Reposted from the recap of the final game of the trip, because it's easy to do)

We'll see how this plays out, both Aggz and Boss were at practice yesterday so it looks pretty temporary. I just hate to see this stuff happen, Coach C felt a need to assert some control but I just don't like the method at all.

Over the course of the trip, Lake Erie signed 3 guys to ATO contracts, Mason Geertsen, Spencer Martin & Kyle Hope. So far Hope is the only one we've seen in a game. He played Sunday on a line with Mitch Heard and Dan Maggio and played a good, simple physical game, as of right now he's still on the roster so I'd say the staff approved.

Another two fellows were signed to ATOs on Tuesday, defenseman Matt Pufahl and forward Johnny McInnis.

Matt Pufahl spent this year with the Everett Silvertips of the WHL, where he was the captain. From what I've been able to gather, he's an offensive D similar to Nick Holden perhaps. 6'3 and 210 lbs, he had 15G/34A this year. Also spent last season with Duncan Siemens and the Saskatoon Blades before being traded to Everett last summer. 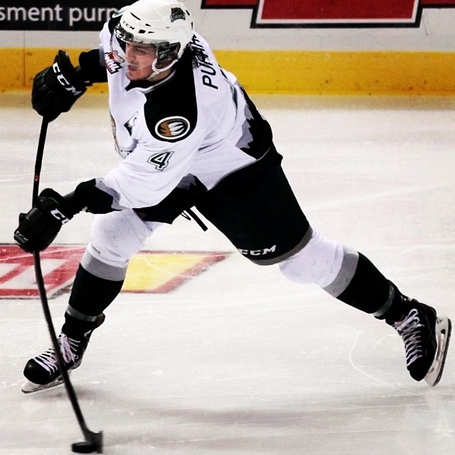 Johnny McInnis comes to Lake Erie from Minnesota State where he too was captain this past season. The 6'1 200 lb forward put up 21G/17A this year. Found a nice article with some background from the good folks at Minnesota Hockey Magazine. 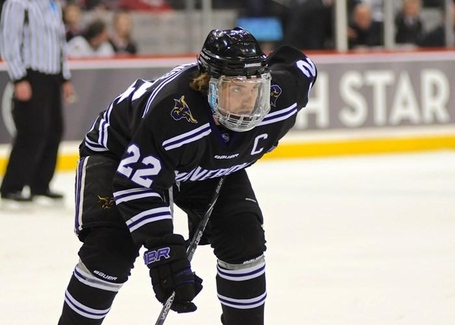 Hopefully we'll see these guys and Geertsen & Martin sometime in the last 6 games.

Bryan Lerg is pretty damn amazing. Not only is he the Monsters nominee for AHL Man of the Year, but he was on the ice for practice yesterday maybe 10 weeks after reconstructive knee surgery. 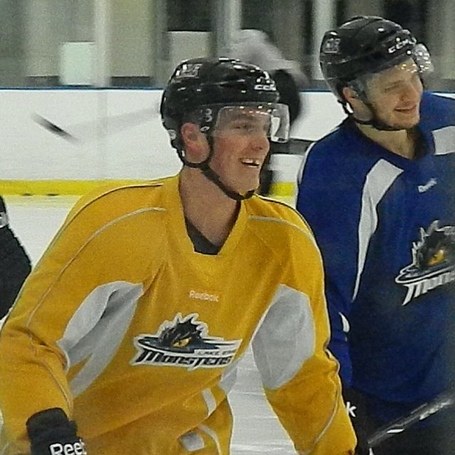 Doug Plagens has an article up on the AHL site about Sami Aittokallio.

AHL standings - Monsters need to go 4-1-1 or better to reach .500 for the season. Actual elimination will probably happen sometime this weekend.

I'll have game and personnel updates here and on twitter throughout the weekend. All 3 Monsters games directly precede the Avs this weekend, stop in and cheer on your beloved Avlets!