Beards of Glory: A Starting Point

The Avalanche are making it to the playoffs. It is glorious. Lets break out those equally glorious playoff beards, gentleman, and record them for posterity!

Share All sharing options for: Beards of Glory: A Starting Point

A playoff beard is the superstitious practice of a National Hockey League player not shaving his beard during the Stanley Cup playoffs. The player stops shaving when his team enters the playoffs and does not shave until his team is eliminated or wins the Stanley Cup. The tradition was started in the 1980s by the New York Islanders.Islanders_1-0">[1] The tradition is also practiced by nearly all North American hockey leagues, to include high school leagues and the NCAA hockey teams, as well as minor league affiliates.[2] The tradition has also spread to hockey leagues in Europe and is practiced by many fans as well.

I am so excited, guys.  There have been some legendary playoff beards in recent years: Chara, Weber, Commadore.  And, of course, our own Max Talbot, who graces the cover of this article.

Starting today, I will be recording the growth of my fantastic playoff beard.  I strongly encourage you to post photos of yours as well.  I'll also be profiling especially strong playoff beards that we see around the league, if I see anything that I like.  This is such a fun tradition, and since we look to do pretty damn well in the playoffs, I am all about it.  I do understand that most of our players currently can't really grow a full, manly beard, but I will fully support whatever straggly, wispy funness grows out of their faces.  Everyone has gotta start somewhere!!

See, here's a fun story:  Once upon a time in, mostly 2010, the Avs made the playoffs.  Until then, I had never had a beard, and it seemed like a great thing to grow to show my solidarity.  Even tho it was a short series (Booooo!), I went ahead and kept the beard.  I let it go for so long.  I have some photos from a wedding that I went to that June, and I hadn't trimmed it at all, and it was pretty damn big.  Finally I learned how to appropriately trim it up, and keep it looking nice.  And its awesome, its such a strong beard.  I love it.  My lady friend loves it.  Its what a beard is supposed to be.

That being said... Its playoff time.  Again.  And, to show solidarity, I am supposed to start from scratch.  Again.  I have had this thing on my face since the last time we made the playoffs.  This is about to be me: 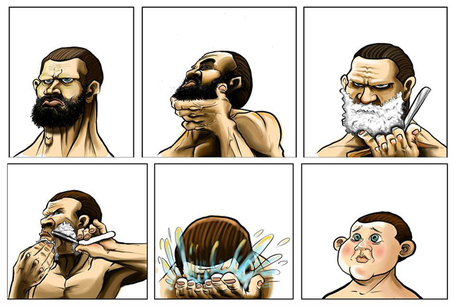 Well, to be honest with you, it was just me.  I am now clean shaven for the first time in four years.

Not to be a downer and all of that, but good god, I wish my beard was back.

Anyway, I did decide to shave my beard off in stages, which was kinda fun, so if we get bored along the way, I can upload those and we can all laugh at my mutton chops, handlebar mustache, and creeper-stache, so maybe those will have to be broken out eventually.  But really I'm now just focused on getting hair back on my face-parts.  I had forgotten what full chipmunk-cheeks I have when they aren't camouflaged: 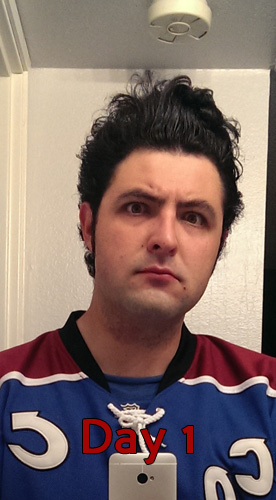 Yes, ladies and gentlemen, that is a beardless me.  My tall-ass Johnny Bravo / Cosmo Kramer hair.  Granted its more Cosmo than Johnny right now (end of the day and all of that), but GOD WHERE IS MY SCRUFF??!!  The look on my face says it all.

So, guys and dolls, let's all revel in the upcoming playoff beardliness, and enjoy the strength of our whiskered countenance.  Hashtag Let It Grow, dudes!  Lets make this fun!!