The Ice Man cometh and leadeth the Avs to a win.

Share All sharing options for: Game 76 Recap: Avalanche take it in the shoot out, 3-2

So it took nearly two minutes before the New York Rangers even got possession of the puck. It was all Avalanche (except for the shots on net part). Rather than bothering with that whole "hold the puck in the zone" madness, New York chose to go straight for the jugular, converting on their first shift in the offensive zone off a screened slapshot from the point (John Moore, 2:10 in the first). 1-0 Rangers.

Random observation: the ice seems super funky tonight. Lots of Palushajing going on. Wonder if it has anything to do with the fact that Mother Nature is a sadistic bitch, giving us 7.5 inches of snow this morning and sunshiny warming goodness this afternoon. Why do you hate Colorado, MoNa?

The Avalanche got the first power play of the night as Derek Dorsett got upset that he was bounced between Nathan MacKinnon and Gabriel Landeskog in consecutive hits along the boards, retaliating with some Landeslashing.

The PP was filled with lots of passing and one really sweet chance by Andre Benoit on an open wide net, but goals were not to be had.

Random observation: This game would be more fun if I had some adult refreshments. Remember when the corner grocers would deliver beer? No? Get the hell off my lawn.

The next power play went to the Rangers with Captain Landy guilty of hooking. You'd think he wouldn't need the extra money given that pretty contract of his. The Rangers were more active with their sticks on the man advantage than the Avs, getting some shots towards the net. When tested, Semyon Varlamov was solid. Between the high-and-wides and the Avs' short-handed chance, though, shots were even over those two minutes.

Stats through the first:

The second started much like the first: lots of Avs possession that didn't amount to much. (Altidudes just talked up this whole "OMG MACKINNON GOT SMOKED AND IS BEING TREATED ON THE BENCH!" Overreact much? He got a soft shoulder in the visor, and the trainer was making sure all was kosher. It's like watching CNN.)

Colorado got a bit of their mojo humming with some pretty looksies; alas, Henrik Lundqvist stood tall. Not too long after a scary opportunity by NY, John Mitchell took a glass-bank from Ryan O`Reilly and zoomed into the Rangers' zone mano-a-mano. But then...a streaking blueberry joined him on the rush! It was Mr. Clean himself! Making up for the missed opportunity on the power play, Benoit roofed a backhander to tie it up at 1.

Oh my, Benoit wants a hat trick or something. Jumped into the rush again, getting a two-on-one with Landy this time. Unfortunately, Lunqvist stopped him, but it caused a lot of bouncy rebounds that probably got a few New Yorkers nervous.

MacKinnon drew a hooking penalty because Derick Brassard realized a step too late that he was not going to keep up with that 18-year-old. This PP looked much better than the last one, with some shots actually getting through, forcing some saves. Of course, they also gave up some short-handed action, too. Sigh. No goalz.

Annnnd penalties continued to be swapped with Cody McLeod getting two for holding Raphael Diaz a little too long. NTTAWWT, at least off the ice. More shorty action by the blueberry boys, killing the entire first minute of the Rangers' power play in their zone. Rangers weren't totally anemic, though. A shot on net, a Varly save, and a penalty killed.

Well, balls. Shortly after coming out of the box, McLeod took an awkward spill behind the net as his skate got caught on Marc Staal's skate. Mac didn't even try to get on his feet, opting to wait for the trainer and a teammate to help him off the ice. When Cody Mac does that, you know he's hurt.

Random observation: After a really boring first period, this game has upped in the interest level considerably.

Rangers got their second of the night after Nick Holden got burned trying to pinch down low. Derek Stepan grabbed the puck, skated in with patience, and beat Varly high on the glove side. The D rushing into the play is awesome...until it's not.

Making matters worse, Mitchell decided he needed to stop some offensive pressure by NY with interference, putting the Avs down a man for two. This PK wasn't as successful as the last with the Rangers spending a great deal of time in the Avs' zone. Fortunately, some well-placed sticks and initial stops kept the puck out of the net.

Random observation: Varly is seriously fighting the puck tonight. He is definitely not in the zone. Rangers only have 20 shots on net. Hmmmm...

The penalty trade continued with Brassard feeling his two minutes of shame for holding onto Paul Stastny. Can't say I blame him. Pauly is a cutie.

Sigh. Too bad it didn't last long. Landy reached back to corral a rebound but got Stepan's skate instead. Two for tripping, 4x4 action to close out the period.

Stats through the second:

Random observation: My boyfriend had a three-point night. :-)

The period started with just over a minute left in 4v4 hockey. Best chance for either team came on a rush generated by Speedy MacKinnon Gonzalez, but the Rangers' D was just fast enough to block the pass to a trailing Tyson Barrie.

This time it was Bordy going down hard (TWSS), limping off after an awkward fall that was the result of a slash job by Moore. At least he got a power play for the Avs out of it. What is up with the short-handed chances in this game? Rangers jumped on that one hard core, and they nearly got it. Avs generated some offense of their own, banging away at some juicy rebounds. Lundqvist shut the door, though. A little too much passing by the Avs closed out the power play with no goalz. They did get four shots on net, so that's something.

Random observation: I think Erik Johnson must just get tired and takes odd-man rushes as an opportunity to lie down for a bit.

Adult language erupted from Captain Landy's mouth as he was called for his third penalty of the night. This time, it was for slashing. Stop bitching, Gabe. All three penalties were legit. So the penalty train shifts back to the East Coasters for two.

Fucking hell. Another Avalanche injury. Marc-Andre Cliche took a slapshot off the arm and held it gingerly as he skated to the bench. Fortunately, he came back out to help finish off the kill.

Random observation: Both of these teams have sucked ass on the power plays tonight. Goose eggs for both of 'em.

The kill gave the boys some energy, and Colorado generated some chances. Did you know that MacK is a sneaky little hobitses, precious? His shots can be tricksy.

With a bit over 5 minutes left in the third, Roy started tweaking the lines, putting O'Reilly with Paul Stastny and Landy and moving MacKinnon to a line with Mitchell and Jamie "I've never met a hamburger I didn't like" McGinn. Right about the same time, the refs suffered an equipment malfunction as their whistles apparently lost their balls. Or maybe they figured this game had enough power plays cuz nothin was being called on either team.

Both teams were guilty of some choppy sloppy play that resulted in crazy chances and breakaways both directions. At the two-minute mark, Varly headed to the bench to give the Avs the extra skater.

You know, I think we need to start calling Tyson Barrie Ice Man because that guy gets those key goals ALL. THE. TIME. 51.4 seconds left and Ice Man ties it up at two.

Stats through the Third:

The Avs were all over the Rangers in the first three minutes of overtime, with player after player just missing that game winner. The last two minutes saw the puck in the Avs zone for the entire time, and the Avs seemed to be interested only in getting to the shoot out. There was a perfect opportunity to clear the puck, but tired legs affected communication, and no one went after it. Fortunately, a successful clear after an icing got some fresh feet on the ice. Mitchell got the final shot, which took a crazy bounce and almost gave the good guys a last-second win. Alas, the shootout was the fate of Colorado and New York tonight.

Roy went way off the board and chose Ice Man as the first shooter. It was his first career attempt in the NHL. And he got a sweet backhander hitting twine after waiting out Lundqvist like a seasoned vet. Or a guy with ICE in his veins! Mats Zuccarello was totally stuffed by Varly. O'Reilly went next for the Avs but just missed. Rolling pucks suck sometimes. Martin St. Louis tried to get cute and backed his butt up on the Russian, who laughed as he said Nyet. Landy was number three for Colorado and banged one off the post. Brad Richards closed it out for NY, but Varly pitched the shoot out shut out and the Cardiac Kids did it again on the back of a young defenseman that is surprising the hell out of me. lolz

Random observation: Ryan Boulding chose the three stars, putting Barrie at 3, Lundqvist at 2, and Varly at 1. Now before you go off on that...

1. Semyon Varlamov: perfect in the shootout and tied Roy for most home wins in a season for the Avs
2. Tyson "Ice Man" Barrie: no words needed
3. Andre Benoit: opening goal, aggressive on the offense, bleached eyebrows 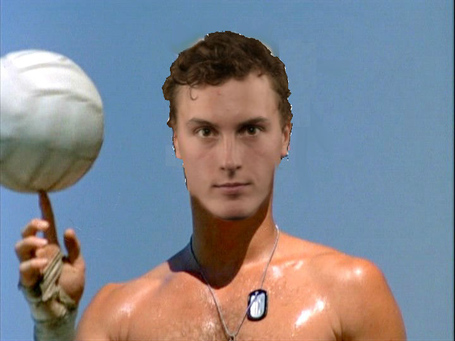