All this week the Mile High Hockey staff bring you Avalanche player awards, agreed upon (mostly) by the staff writers and offered up for your debate. Enjoy.

Was there really any question? Varly posted an absolutely glistening .927 save percentage, second in the league only to Tuukka Rask, who, let's be fair, played a lot of garbage teams behind the Bruins defense (which translates to 4 fewer shots against per game). At even strength, Varlamov posted a .935 SV%, again second only to that fool of a Tuuk.

Varlamov is a candidate for the Vezina and would be absolutely deserving. He may not have been the most valuable player in the league (though I would have tossed him a lower-spot Hart vote), but he was most definitely the most valuable member of the Avalanche.

Just for fun I threw a chart together. It's difficult to find, but the league average SV% his season was somewhere in the 9-teens level, referenced here by Eric T (which will always be good enough for me) as .914. Every team is going to suck if their goalie sucks. Fortunately for the Avalanche this was practically never the problem (click to embiggen): 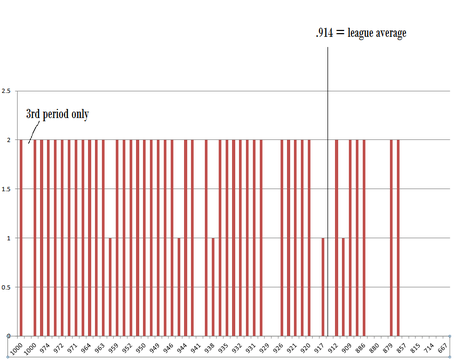 That's standings points earned vs. Varlamov's save percentage. He was better than league average almost every night, and the Avs profited handsomely.

Most Likely to Get Out of Here: Paul Stastny

This one could really really hurt, you guys.

Nick Kypreos said late this spring on Canadian radio, captured as always by @Hope_Smoke, that Colorado isn't prepared to pay him more than $5 million. That would be a disastrous mistake.

It's 2014. We don't need to defend this guy any more. You've already made your mind up anyway.

There is no free agent on the market more covetable this offseason than Paul Stastny. This is on the front office for not either dealing him for whatever they could--anything would be better than letting him walk for free!--or locking him up to an extension sooner. His asking price has gone up because his agent knows damn well what he could get out of Toronto or St. Louis or any number of teams looking for that magical 1C. He is going to demand substantially higher than the Avalanche would like and they will meet those demands or not but the key is this is their own damn fault.

Thank goodness we got priority extensions out of the way. Like three years for Reto Berra.

We don't call him Captain Sexy Hair for nothing. The flow is second to none. See above. Stop being so perfect, Gabe, dammit, you're embarrassing us.

Honorable Mention: Nathan MacKinnon for this grainy film of glory. Click to enflippen.

Too much hngggg cannot handle