Cash, Cups, and the Colorado Avalanche.

Hey there MHH, it's been a while.  Between the Avalanche breaking my heart in round one, graduating, and moving cross country I've been too busy lately to write much over here.  I've watched quite a bit of playoff hockey, but like SteveHouse suggested last week it was tough to get invested in these playoffs when the Avs' loss still feels so fresh. Watching the 2014 Stanley Cup Playoffs for me has been less enjoyable and more analytical because, like many of you, I keep asking myself, "What do the Avs need to do to get here?"  The answer, unfortunately, is a lot; and it involves a massive sea change at the top in the way that this organization does business and, more importantly, in the amount of money that is invested in the on-ice product.  Over the next 2 weeks the Avalanche have some enormous decisions to make about the future of this club, but before we cover those moves specifically, we should take a look at the bigger picture.  What does it take to build a real winner?

I don't think many will disagree the three best built teams in the NHL today are the Chicago Blackhawks, the Los Angeles Kings, and the Boston Bruins.  These teams have young depth that complements their prime age core.  They are built to continue succeeding over the next 5 years, and over the last 5 years.... well, just look at the Stanley Cup Finals:

If we take a quick look at the rosters for those three teams you'll see that they've built their massively successful squads in a variety of ways.  The Bruins and Kings have built their teams primarily from 1st round picks and trades, filling in a few depth positions with UFA signings and picks beyond the 3rd round.  The Blackhawks on the other hand have drafted their most important players and used trades to fill in gaps, signing very few UFA's outside of Marian Hossa. 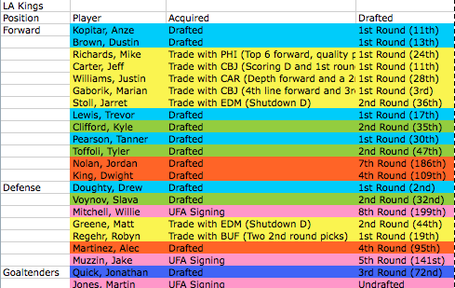 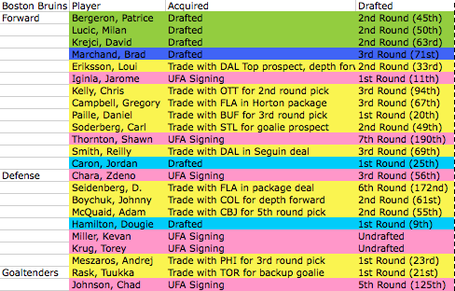 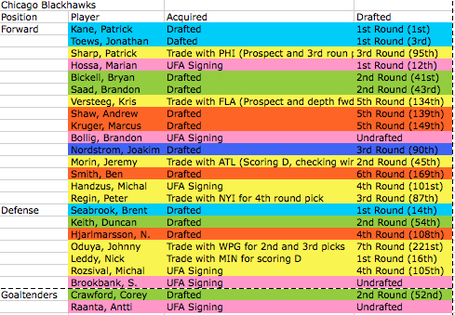 The Avalanche’s 2013-2014 roster is also shown below, one quick look will tell you that the Avs rely much more heavily on UFA signings than these other teams, especially in regards to their bottom six forwards and bottom four defensemen (more on those later).  This makes sense of course, since you generally have to pay a premium for free agents, giving up a disproportionate amount of cap per player. 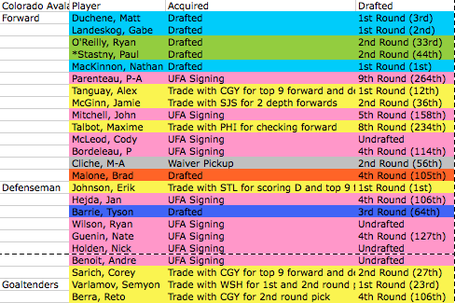 So these top three teams draft well and they trade for need instead of relying on UFA's.  None of that is really all that big a surprise, so what else do these top teams have in common?  They spend money on their team, and more importantly they spend it well.  A quick look at CapGeek and you'll see a somewhat eclectic group.  Up and down squads like Philadelphia and New Jersey rank 1st and 6th in spending, while playoff chokers like San Jose, Washington, and Vancouver rank 4th, 7th and 8th.  The Blackhawks, Bruins and Kings rank 2nd, 3rd, and 5th in sending respectively at the end of this NHL season.  The moral of this story is simple. Spending doesn't equal wins, but you have to spend to win.  So lets take a look at how these top teams spend.

Below is a chart that shows each team's average spending by position.  I've divided each team's forwards into a top six and bottom six, and divided each defense into it's pairings.  All contract numbers and rosters are based on the rosters at the completion of the 2014 Stanley Cup Final.  Because of the Avalanche's ummm "precarious" contract situations with Ryan O'Reilly and Paul Stastny, I have included a few extra scenarios for our Avs. In the event of Paul Stastny leaving I've bumped P.A. Parenteau and his $4 million cap hit into the top six for the purpose of calculations.  For Ryan O'Reilly I have made rows which award him contracts either matching his qualifying offer of $6.5 million or his arbitration minimum of $5.5.25 million.  If he wears the burgundy and blue again, his contract will likely fall somewhere in between.

It Starts At The Top

The Top 6: Now, when I started writing this article last week I was planning on telling you all about how when the Avalanche re-signed Paul Stastny and Ryan O`Reilly, they would be in an appropriate spending bracket for their forwards talent levels.  Giving Stastny $6.6M and O'Reilly $6.5M would mean that the Avalanche spend an average of $4.85M per top six forward.  That number would place the Avalanche just above the Chicago Blackhawks and Boston Bruins in dollars spent on their top six.  An appropriate number considering the caliber of their offense, and that the Blackhawks spending is artificially low due to old, expiring contracts for Patrick Kane and Jonathan Toews.  When the Hawks two star forwards come up for contract next year their spending will climb significantly.  That $4.85 figure would place the Avalanche almost $6M dollars behind the Stanley Cup Champion Kings in cap allotment for their top six, ample room to extend Nathan MacKinnon when his contract comes to an end.  The Avalanche's top six talent is comparable to that of the NHL's best, and their spending was in line to match.  We'll see what happens in the coming weeks, but the Avalanche had the opportunity to secure their competitive top six for years to come at a competitive rate in regards to the cap.  Today the chances of that look relatively slim.

The Top 4: Now we all know that the Avalanche have massive needs on the defensive side, but when I started looking at some of the CapGeek numbers I was shocked to see just how far the Avalanche lag behind the NHL's best when it comes to spending on their defense.  I want to reiterate here that this isn't about money, it's about having a caliber of players that are worth more money.  Now if you look at the contracts for the top defensive pairing you'll see a massive disparity between the Avalanche and the NHL's best teams.  If you just glance at the graph things may not seem so dire, the Kings and Bruins spend just $500,000 more per player on their top pairing, but look closer and you'll see that while the Avalanche pay their top pairing in near matching $3,000,000+ contracts, the Bruins and Kings pay their number one defenseman (Zdeno Chara and Drew Doughty) near $7,000,000 while their partners (Dougie Hamilton and Jake Muzzin) remain on small tryout and entry level contracts.

- The Kings, Blackhawks and Bruins all spend more money on their second defensive pairing than the Avs spend on their top pair.

- All of the defensemen featured on the Avalanche's second pairing last season (Barrie, Holden, Benoit, Guenin) make less than $1,000,000.

- Both the Kings and Blackhawks spend twice as much as the Avalanche on their defensive group.  The Bruins do not, but feature three players on their first NHL contract (Dougie Hamilton, Torey Krug, and Kevan Miller), skewing their numbers down.

Now of course Tyson Barrie's ELC also lowers the Avs' average, but most of these teams have one ELC or other guy making roughly 1 million, so you can't blame the Avalanche's extraordinarily low defensive spending on youth and ELCs.

Those Other Guys: The Avs defensive issues are obvious, and the state of Stastny and O'Reilly's contracts could undermine the strength of their top six, but there is another problem standing between this team and a deep playoff push.  The Avs are very inefficient when it comes to their bottom six forwards.  Before Jamie McGinn's new contract, the Avalanche will spend $500,000 more on their bottom six than the NHL's best teams.  Take a moment and ask yourself, which of these groups would you like most?

In my opinion, the standout group here is the Los Angeles Kings.  While Boston and Chicago's bottom six groups are somewhat comparable to the Avs, the Avs group is older, more expensive, and less flexible.  When injuries hit the Avalanche at the end of the 2013-2014 season, players like Marc Andre Cliche, Cody McLeod, and Max Talbot were forced into extra minutes where they were expected to contribute offensively.  They failed to produce, and it cost the Avs dearly.

In a Fan Post earlier this week, MHH user Do Not Feed the Octopus provided a nice explanation for how the Avs bottom six got this way, and how it can be fixed, check it out here.  The idea essentially is that rather than populating the 4th line with highly limited free agents like Cliche and Bordeleau, you slowly incorporate prospects into your NHL team with 4th line minutes.  Replacing these role players with prospects like King, Teravainen, or Toffoli makes the bottom six more flexible, as inexperienced but talented players look for opportunities, and it makes them more financially efficient; taking advantage of ELC's and tryout contracts to save money.  Whether the Avalanche spend to the NHL's salary cap or an artificially imposed Kroenke salary cap, slowly phasing out these bottom six players in favor of younger prospects.  The Avalanche have seemingly already begun this process, signing a number of European forwards to fill gaps on the farm team and hopefully contribute to the big club in the coming years.  Expect the Avalanche to pick a number of forwards in this year's draft as they attempt to restock the prospect cupboard.

Over the next two week's we'll see the Avalanche take their first steps towards addressing these gaps throughout the roster.  Will the Avalanche attempt to upgrade their defense in free agency or through a Ryan O'Reilly trade?  Will the Avalanche retain either Stastny or O'Reilly?  If not, will they fill their new offensive gap with a high powered free agent?  How successful will the Avalanche be drafting late in the first round?  We'll cover all of that with some Window Shopping, draft coverage, and of course updates on the Paul Stastny and Ryan O'Reilly negotiations.

But the biggest question of all comes down to one thing.

Will the Avs be willing to spend it? And if so, how much? And how well?

When Patrick Roy and Joe Sakic joined the front office, they, along with Josh Kroenke, made it clear to fans that winning was a  top priority for this franchise, and that the team was willing to spend.  Well now, with two top flight players on the line and a patchwork defense holding the team back, that time has come. So...

It's time to put your money where your mouth is.