Half are there, half are here.

The first official preseason games see the Avalanche and the Ducks facing off in two different cities. No new cuts were made, so some of the team is sitting out, presumably to rest aching bodies. Unsurprisingly, the teams both seemed to keep most of their stars at home, sending the kids on the road. Expect to see bloodbaths for the home teams in both locations.

Here's a snippet from the Avs' preview for tonight, looking back to last season's games between the teams.

The Avalanche met the Ducks twice in exhibition games last year, taking each with a 2-1 score. Colorado also opened the regular campaign at home against Anaheim last season, taking the contest 6-1 in head coach Patrick Roy’s debut behind the Colorado bench. The match set the tone for the season for the Avs, who went 10-1 during the opening month and hardly let off the gas for the full 82-match duration.

The two clubs clashed twice more during the regular season, with Anaheim taking the victory in both contests. The final meeting between the two teams was the last game of the year and determined the top seed in the Western Conference. Even with the 3-2 loss in overtime, Colorado went on to take first place in the Central Division and second in the Western Conference.

Rosters for the night: 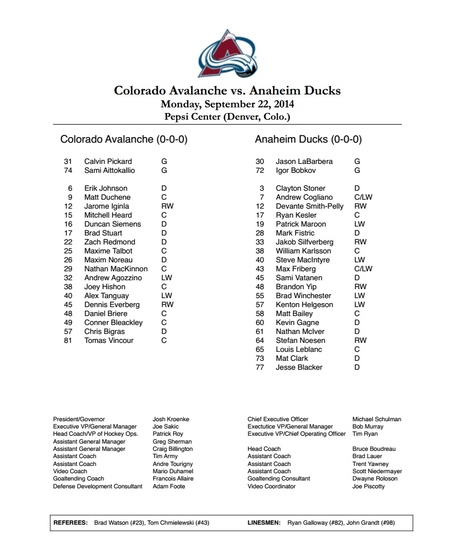 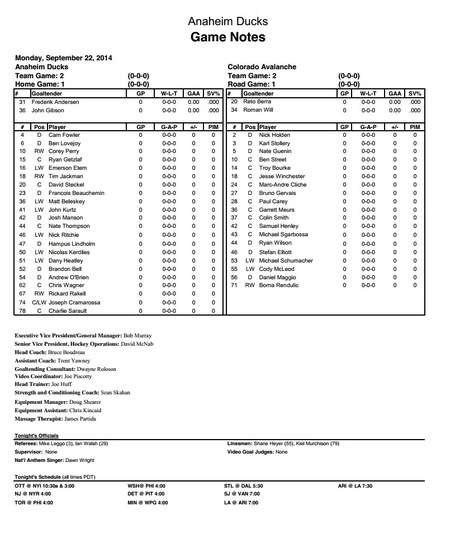