Colorado Avalanche: News from around the NHL September 26th, 2014

Share All sharing options for: Colorado Avalanche: News from around the NHL September 26th, 2014

After putting up 112 points and winning the Jack Adams Trophy as coach of the year in his first season behind an NHL bench, what can Patrick Roy possibly do for an encore?
Even a coach with Roy's self-confidence doesn't see his second season with the gifted young Colorado Avalanche going that well.
"There are a lot of coaches that are better than me, but I believe I'll continue to learn," Roy said Thursday. "And the worst part of this is, I'm sure I'm going to be a better coach along the way and I'm probably never going to win the Jack Adams again.
"It was a great year. It was fun, but now it's behind us."

Speaking of Roy, he'll always be a story in Montreal.

The legendary Habs netminder, in his rookie season behind the Avalanche bench, was featured that morning in a command-performance news conference, the room packed for a 30-minute four-ring circus - two of Roy's Stanley Cup rings were earned in Montreal, two more followed in Colorado.

Roy said he hadn't taken a look up during his team's game-day morning skate to see his No. 33 banner hanging in the arena rafters, but admitted he had stolen a glance a little earlier.

Want a video of the training camp? The Avs posted their gocam... now go check it out.

Want to go to some Avs games with fellow Avs fans? The Burgundy Brigade has some tickets on sale. Prior to the fundraiser game on Monday, February 16th will be the annual Burgundy Brigade vs. Mile High Hockey game. More details when it gets closer, but put it on your calendars now! 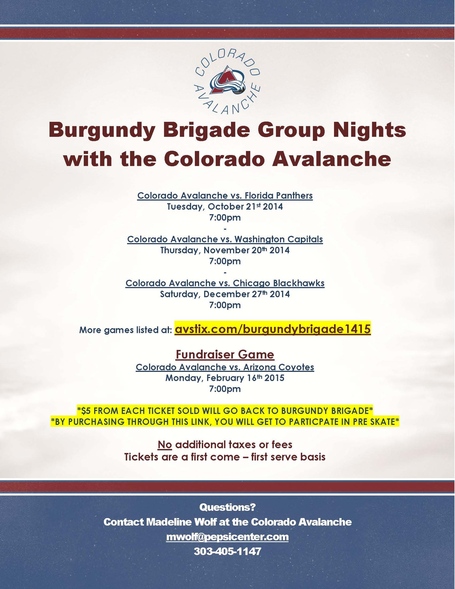 Don't forget to join the Brigade! Contact Kevin below...

But those same talented forwards can also become part of the solution this season if the Avs are going to cut down on scoring chances against.

"I think we have a great D-corps," Avs winger Ryan O'Reilly said after Thursday's morning skate. "As young forwards, sometimes we weren't as good as we should have been [defensively] and left them out to dry. Playing D-zone is not just about the defensemen. We gave up so many shots last year, Varly bailed us out, but as forwards, we got to do a better job to help them out.

"We got everything we need back there on defense," he added. "But collectively as a team we need to be better [defensively]."

When you're a team as loaded as the Avs are up front, nobody on Colorado's defense is expecting to suddenly steal the media spotlight. They're fine with that.