Two players were dropped from the roster today, one of which is significant.

Share All sharing options for: Avalanche reduce roster to 38; reassign Elliott, Will

The Colorado Avalanche have reassigned D Stefan Elliott and G Roman Will to the AHL.

After getting a number of chances to prove he's NHL worthy this season, Stefan Elliott has been reassigned to Lake Erie. The impact of this could be huge as Elliott must pass through waivers for the Avs to keep him. He's a young, still-developing defenseman that some NHL team could get for free. There's a good chance someone will take advantage of the situation. Elliott had a rough camp, and preseason wasn't much better for him. It's a far cry from where we all thought he'd be after his first foray into the NHL. With any luck, he'll pass through waivers and get another chance with the burgundy and blue.

Goaltender Roman Will has also been reassigned to the Monsters. He, however, is waiver exempt. Will had a fantastic camp and preseason, so much so that LEM regulars Calvin Pickard and Sami Aittokallio better keep up their games. Will is definitely a contender for one of the two jobs in the Monsters' net. Pickard is still currently with the Avalanche, however, while Aittokallio reported to LEM's training camp already.

Here is the current roster for the Avalanche: 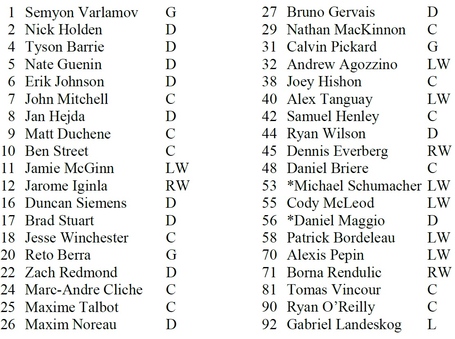