Good morning ladies and gentlemen! The clock on the wall says we have but 9 days until our beloved rookies hit the ice to kickoff the 14/15 season. Get stoked! Issues on the mind of our faithful MHHers this week included:

- Tyson Barrie signed a contract! For all the angst these negotiations produced amongst Avalanche fans, it turned out to be an entirely fair and reasonable deal. A nice raise this year, another one next year and a QO for next contract that both parties can be happy with. This is how it's done.

- Poster Hetz guessed correctly on the Barrie signing and receives this fine mug for a prize: 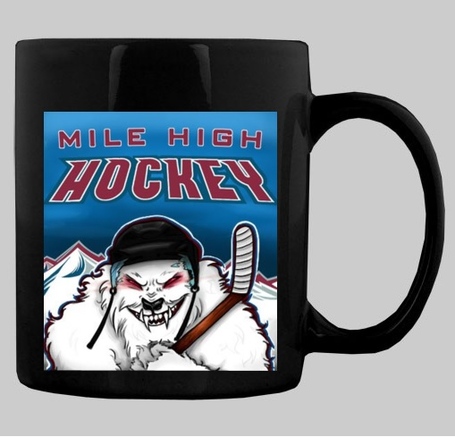 I want one. Cheryl's working to set up something so we all can get mugs and be winners. More on that as it becomes available.

- The Avs announced the training camp schedule yesterday. Rookies come in on the 14th and get 3 days on the ice to wow the staff (9/15-17). Vets report for physicals on the 18th then get a couple days of practice before the Burgundy-White game on the 21st and the split-squad games vs ANA on the 22nd. It will be interesting to see how this works out with a short camp, long pre-season scheme.

- The deets on Tomas Vincour's contract were released - 1-year 2-way for $600k. Seems like Tomas was eager to return to the States.

- Avs prospect Nate Condon was signed to an AHL contract with the Monsters this week. I like it, and who wouldn't want 39 forwards for training camp?

- Former Avs prospect Luke Moffatt has signed with Frolunda of the Swedish league. So our trio of NCAA 7th rounders has produced 2 AHLers and an SHLer (so far).

- Got an itch to play fantasy hockey with all your pals here at Mile High Hockey? Check out this post by Hopf to get in on all the fun.

- Reports out of the Vail Valley have Nathan MacKinnon bigger and faster than last year. :)

- Speaking of Mack, he's moving in with the Talbots this year. Fatso wishes them all well.

- And speaking of Fatso, his bro Tye (currently of the Worcester Sharks) laments the fact that he never had the chance to don the Burgundy & White.

Enjoy the last boring weekend of the summer folks, hockey is about to start happening.