With just 20 games to go in the 2015-16 season, the Avs buckled down and beat a good Sharks team on a night that easily could have been defined by distraction.

In case you hadn't heard, the Avalanche play this crazy outdoor game at Coors Field on Saturday in front of nearly 50,000 people. It's nationally televised, a much-anticipated alumni game precedes it on Friday, and the surrounding streets will be filled festivities to celebrate the event. Even the most focused of professional athletes might find themselves distracted by the fanfare. But that's not what happened tonight. Facing the likely playoff-bound San Jose Sharks, Colorado played one of their better games of hockey this season and squeaked out a 4-3 win in a shootout.

San Jose was on the board first, though -- early. Nick Spaling, playing in his first game for the Sharks since being traded from the Toronto Maple Leafs, wasted no time ingratiating himself. After blocking Andrew Bodnarchuk's wrist shot from the point, he skated the length of the ice and fired as top-shelf as top-shelf can get, right over Calvin Pickard's glove to put his team up 1-0 (Video). But he wouldn't be the only former Maple Leaf to get on the board in the 1st Period. Shawn Matthias, freshly traded to Colorado on Monday, cleaned up a puck right in front of the net to tie the game, handing assists to Carl Soderberg and Francois Beauchemin for their efforts (Video). 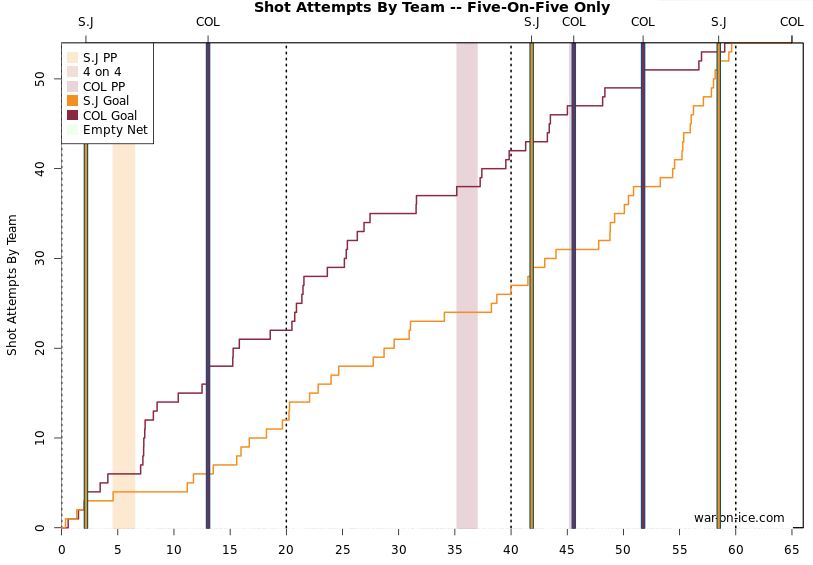 The rest of the period would be marked by surprisingly solid Avalanche possession play, particularly by Nathan MacKinnon's line, who absolutely dominated while on the ice. Colorado allowed just eleven 5-on-5 shots at the net during the period, while firing off twenty-two themselves. If you follow this team closely, you will know the opposite is generally the case -- a pleasant surprise!

The 2nd Period would see no scoring, but a continued high level of play from the Avs, who continued to shoot the puck and suppress shots. MacKinnon, alone, would have eight shots-on-goal before time ran out and looked liable to score at any moment.

The Sharks would strike again early in the 3rd Period, just 1:50 in, when Brent Burns made an aggressive play during a line change and skated the puck below the Avalanche blue line. With fresh players skating into the play, he flung the puck out in front of the net, and instead of finding a teammate, he caught Erik Johnson's skate at just the right angle and watched the puck slide past Pickard for the go-ahead goal (Video).

But just three minutes later, Jarome Iginla would draw a penalty on Joonas Donskoi to put the Avs on their second power play of the night. After winning the ensuing faceoff, Gabriel Landeskog caught the puck on the right side and dished to Tyson Barrie at the point, who hesitated only slightly before passing the puck on to Iginla at the high left circle. The 38-year old veteran then sent a blistering one-timer past Sharks goalie Martin Jones to tie the game (Video). It was Iginla's 18th on the year and the 607th of his career, just one behind Dino Ciccarelli for 17th on the all-time scoring list.

The Avalanche would seize their first lead later in the period when Nathan MacKinnon found Andrew Bodnarchuk skating up the right wall. The Colorado defenseman then made an aggressive play toward the net and centered a pass to Gabriel Landeskog to take the lead with just over eight minutes to go (Video). Unfortunately, the Avs would stop taking shots almost entirely at that point (seriously, zero SOG for the rest of regulation) and give up quite a few prime opportunities to the Sharks.

This strategy would finally bite them in the ass with 1:31 remaining, when Joel Ward scored on a great pass from -- who else? -- Joe Thornton to tie the game (Video). The third period would end knotted up at three.

3-on-3 overtime, as always, was chalk full of excitement and anxiety, but each team's goalie would turn away all would-be game-winners. The game would go into a shootout, with MacKinnon and Matt Duchene scoring on their attempts and Calvin Pickard making three straight saves for the victory.

The Avs move to 68 points and hold onto their final wild card spot. They play next on Saturday versus the Detroit Red Wings under a beautiful Colorado sky.