9 goals!! Holy crap neither of these teams has a blueline capable of stopping a 6-year-old-girl from clowning them!!

Share All sharing options for: Anatomy of a Goal: CAL vs. COL - Goal 9

Probably not the goal you though it'd be, but as awesome as Gabriel Landeskog's game-tying tally was in last night's game, it has the stink of Joey McDonald all over it. So in happier news...we're gonna look at another great team goal from Matt "Don't Call It a Comeback!!" Duchene! 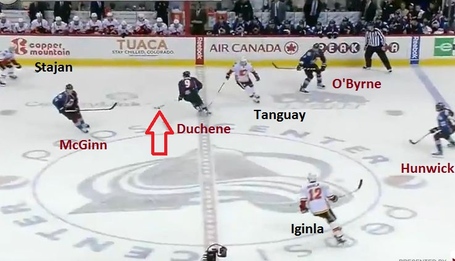 With just over nine minutes left in the game, Matty D has the puck in the neutral zone after a turnover and saucers it with some *ahem* trigonometry off of the boards toward the offensive zone due to quickly-applied pressure from Calgary's Matt Stajan. His new BFF, P.A. Parenteau is exiting the O-zone while Jamie McGinn circles through neutral ice toward the near boards. 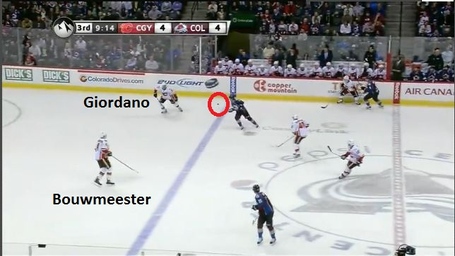 Pappy juuuuuuust gets a skate on the blueline before knocking the mathematically-gifted puck into the air, gets just outside the blueline, turns,... 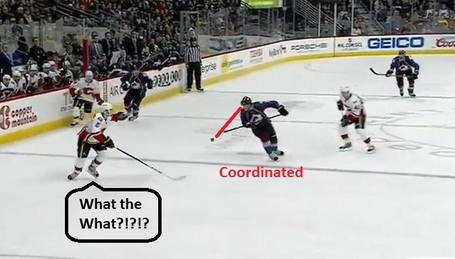 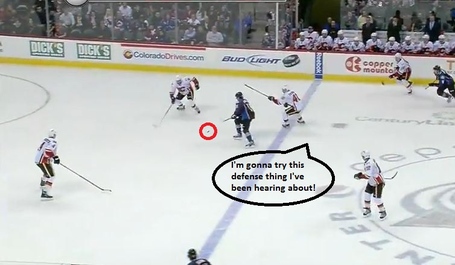 ...and starts a 2-on-2 with J. Biggie McGinny. Pappy starts attacking the center of the ice as the Flames' "defensive" duo of Jay Bouwmeester (#4) and Mark Giordano (#5) start backing in. Former Avalanche stalwart Alex Tanguay (#40) is just behind the Whipper-Papper while Hall of Famer Jarome Iginla (#12) is coasting toward McGainedafew. Dutchy and Stajan have started back into the rush. 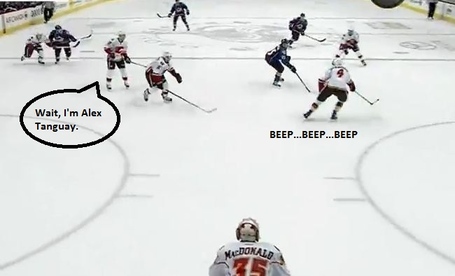 Dutchy quickly gets position on Stajan (despite a lame interference attempt) due to his Speedy Gonzales abilities. Pappy carries the puck into the high slot, forcing JayBow to angle his big ass thataway. 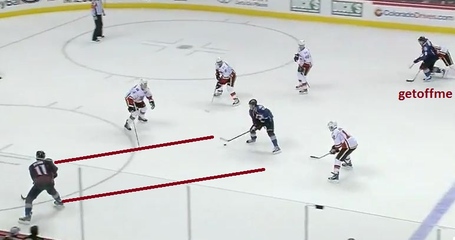 What does this matter, you ask? It opens up a massive passing/skating lane for McGinn on the left side. Yes, even with Old Man Iggy trying to pinch off Parenteau's route with his impersonation of a squirt player leaning on his stick for balance. Giordano appears to still be in a trance from the puck-juggling! Still, look at this frame: This is a 3-on-4 for the Avs AT BEST. It really is more like a 3-on-2 with Stajan having somewhat contained Dutchy, but let's see how this unfolds... 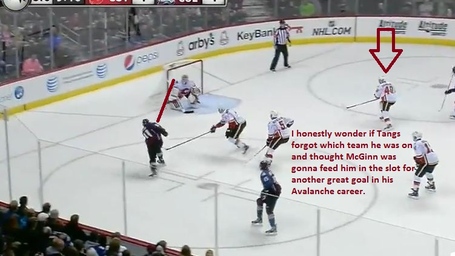 Parenteau puts a pass onto Big Jamie's tape. Giordano is still googly-eyed and follows the pass toward McGobbles in either a show of total disrespect for his partner's abilities or due to the smell of warm bread that follows McGinn everywhere he goes. McGinn catch-and-releases for a high, hard, near-side shot. 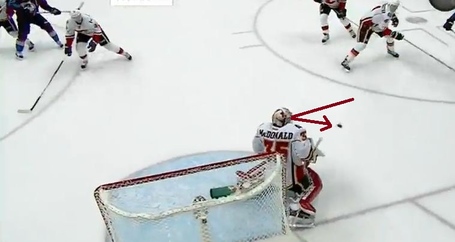 Red Wing Hall of Famer Joey MacDonald (#35) goes into a tight blocking butterfly, but takes the puck right off of his dome. 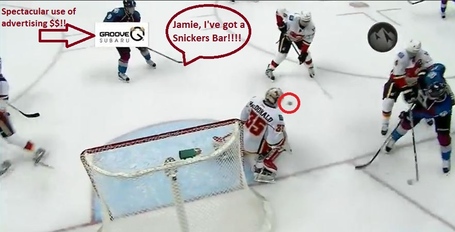 Having followed his shot to the net (just like he's supposed to do), the rebound drops right at McGinn's feet to the left of the net. Even with Bouwmeester holding onto him in a rather friendly manner (I believe that is Jamie's nipple that he is not-so-subtly caressing), Jamie slides the puck toward the low slot while JoeMac appears stunned. 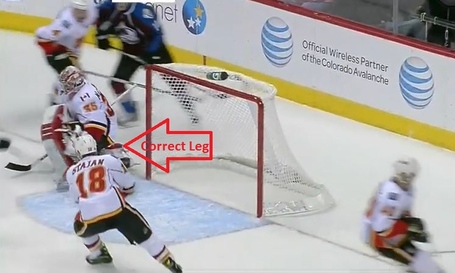 At least stunned enough to try and recover with the wrong leg. Note defensive guru Alex Tanguay Buzzing the Tower® after doing ABSOLUTELY NOTHING to dissuade Duchene (you know, the only offensive player even remotely in his vicinity). I'm sure Bob Hartley was having a traumatic flash-back on the Calgary bench. 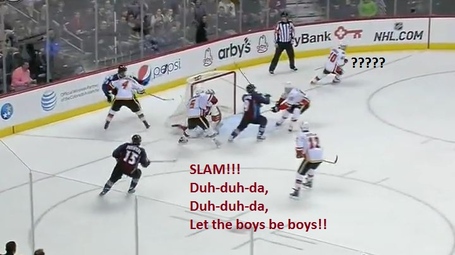 Duchene is there in the slot, having shook-off Stajan. Tangs is completely clueless to what is happening as he's facing the wrong way. However, with nothing but a 4x6 in front of him, Duchene 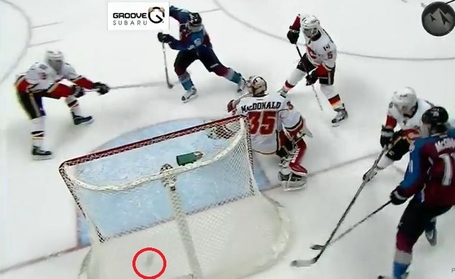 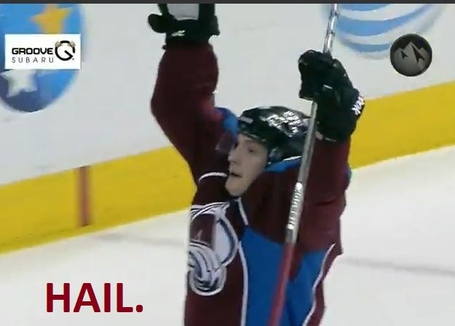 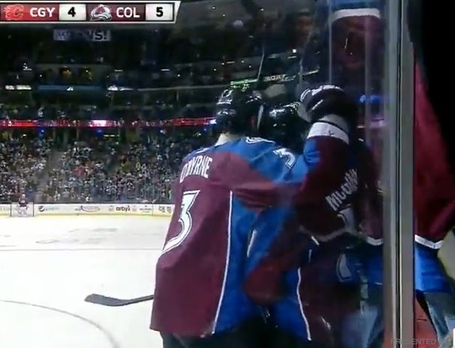 Hugs. Ryan O`Byrne totally gets free man touches having joined the play from the bench.